Another highly entertaining postcard arrived recently.  Authored via typewriter.  And for a second time, the post cancellation mark (missing in this instance) gives me no help in identifying the author.  Am pretty sure I know, but I like the 2% of it possibly not being that person!

What's also fun is the continuing change of character and locale.  A Fictional Correspondence, such as I have been describing here of late, can be a matter of the same people writing within the same storyline (like this).  Or it can be one-off postcards like this and the last one I received. 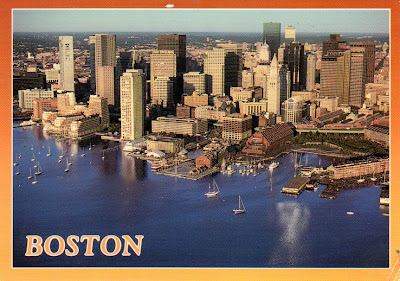 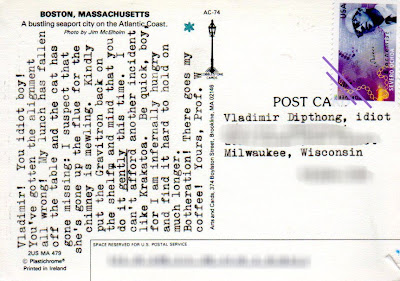 Update: The author of this and the earlier one fell into the aforementioned 2%!  What a hoot!  The person who I thought sent these is going to be mighty puzzled by a recent letter then.  [Raises glass in toast to the author.] 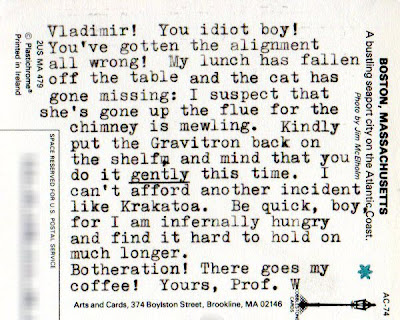 The inspiration for these kinds of postcards came from a column by Anne Herbert titled "The Rising Sun Neighborhood Newsletter" published in The Next Whole Earth Catalog.*  In one portion of the column Herbert describes an old friend and town eccentric Amanda Madison.

"Amanda died in 1969 and was old and everyone loved her.  She started her unusual career by not marrying, which was quite unusual at the time."

Amanda Madison had a friend, 8 year old Lu Ann Sellers.  They had a correspondence going -- written as if they were both going around the world, one from the West and the other from the East.  Sadly, Amanda died before the two of them could complete their journeys. 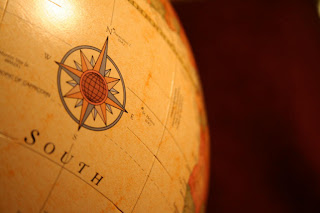 The young Lu Ann was devastated: "I'm only in Bengali!" she wept to friends at Amanda's memorial service, "I never got to tell her how much I liked her card from the organ grinder's convention in Kansas City, KS."  Amanda and Lu Ann apparently never spoke of the correspondence when they saw each other.  Their plan had been to talk all about it when they finished their imaginary expeditions.

Herbert says that in trying to comfort Lu Ann, an idea was born: "Write about the rest of your trip to me, " she said, and in doing so she, Lu Ann and many others realized that their friend Amanda "could live forever in the mail."   This group of friends shared Amanda's postcards over and over - restamping them, readdressing them.

But Amanda wrote to others as well.  Herbert reports that "She started writing postcards to everyone, to people she saw everyday, that had nothing to do with anything." 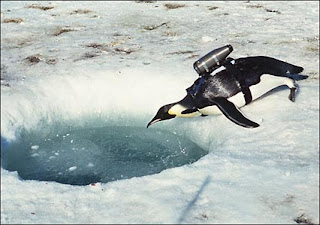 "Postcards of Miami Beach written as if she were an antarctic explorer -- Took this in my gear to remind me of warm weather. We'll meet on the beach soon, love.  Progress is good but we had to put down a penguin rebellion last night.  It was rough but we're safe now. Think of you always, Norbert"

This was during the time of the Korean and Vietnam wars and many young men were being drafted.  Some of them from their town stopped by Amanda's house before they left.  She would tell them that if they didn't want to write her about what was really happening, that should write and tell her what they would rather be doing instead.

One soldier wrote her about preparing a gourmet dinner.  Another wrote from Korea, telling her about sitting in front of a fireplace, drinking wine.  Still another wrote of "planning, financing, building, and using the perfect doll house factory." 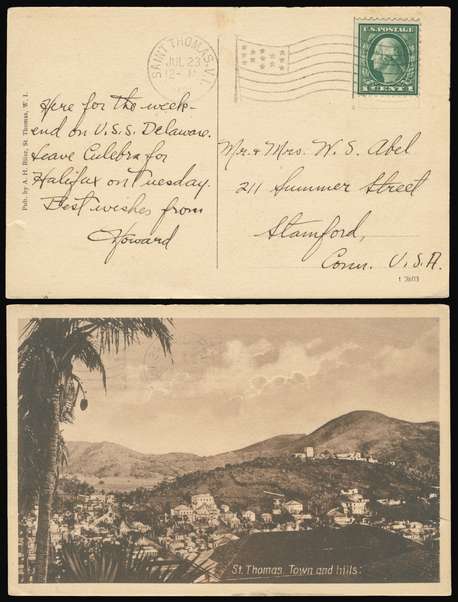 
So . . .  you can see that while the content of a fictional correspondence might be lighthearted and entertaining, the souls who write them are very tender, very real, and very human.  We share more than a game when we play a letter game.  As Amanda Madison said,

"Life is alternately boring and horrifying and we are all quite unreasonably lonely and I see no reason to treat dreams as some unmentionable head lice.  We all have them and might as well mail them to each other until we learn how to talk."