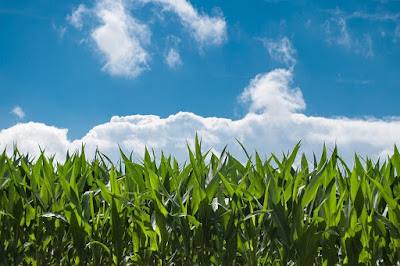 I like to imagine that anyone who grew up in the American Midwest has a fondness for corn. My grandparents originally had a dairy farm but by the time I came along, they'd retired and rented out the pasture to a neighbor who grew cow corn (also known as feed corn or field corn) for his herd. 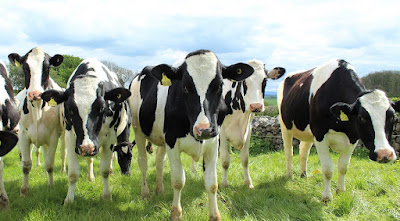 Mr. S  planted the outer 6-8 rows with people corn (or sweet corn) and shared the bounty with my grandparents. I can recall several all-family harvesting ventures in the late summer where we would pick a great many bushels' worth and then spend an afternoon parboiling the peeled ears and cutting off the kernels to bag and freeze for the upcoming winter.

My Dad, a college professor who, over the years, did regular double, triple, and you-name-it duty as a truck driver in a rock quarry, grocery shopper, darkroom photographer, furniture builder, tree planter, Concord grape grower--also made our daily bread. He had the knack - making up multiple loaves each week to feed our family of twelve. He occasionally made cornbread--which he always called Johnny Bread.

He always made it in 8x8 aluminum cake pans, though. So I grew up thinking that was how it was made--and only as an adult learned that it is more typically made in a cast iron skillet. Recently my friend Musician, a classical violinist by night and executive admin assistant for the IAEA by day, sent me a gleeful letter. After years of not having one, she'd been given a cast iron skillet and was over the moon! Proper cornbread could be had now.

Her glorying over having a cast iron pan for it AT LAST was so fun and exciting and totally inspired me want to see if we still had a cast iron skillet of our own and, if we did, to MAKE SOME. Reader, we do and I did . . . and it was truly scrumptious! I looked up some recipes online that specifically mentioned using a cast iron skillet . . . and then I sort of combined instructions and switched up the ingredients a bit. It came out wonderfully fluffy and, because of the pre-melted butter trick and nutmeg spicing, crust-crunchy-rich and tasty. I like cornbread with butter pats and honey. My Beloved Spousal Unit prefers maple syrup instead. Either way, it was delicious!

Here is a brief photo history of the making followed by my modified recipe. 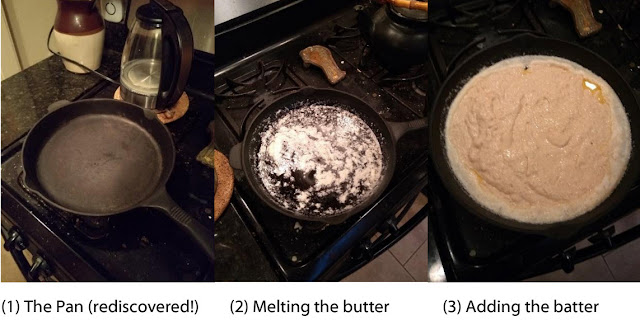 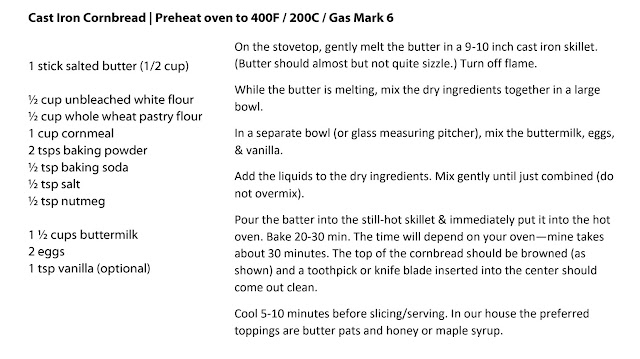 Field of corn under blue sky. Skitterpocket via Pixabay.
Holstein Cattle. CallyL via Pixabay
Cookery images are my own.