Freebies on a Friday 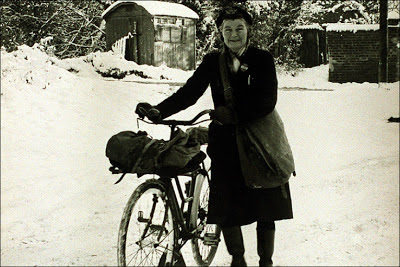 
As many of you know, I am big into letter-writing, actual and fictional.  And as many of my readers and fellow Typospherians have been most appreciative and encouraging of Dante's Wardrobe, I would like to say Thank You and give you something in return.

Below are some download-able items I've made as part of my letter play.  Please enjoy. 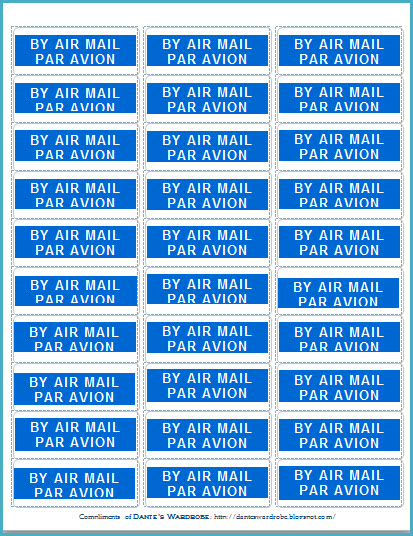 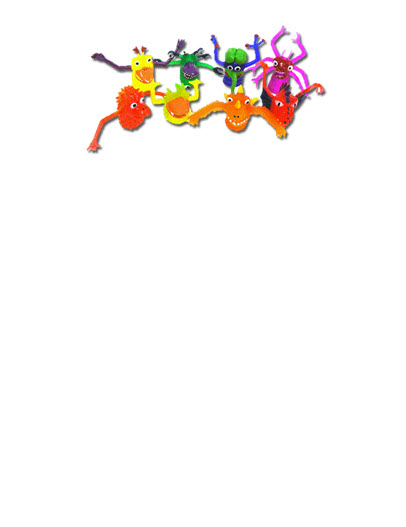 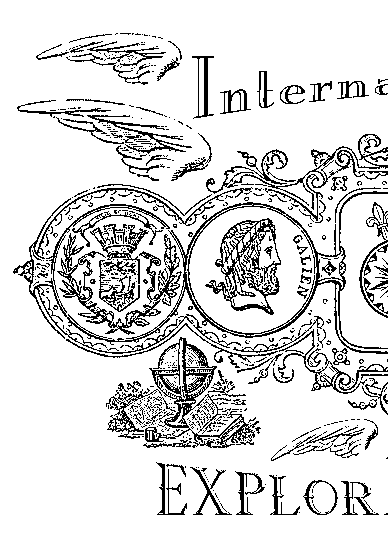 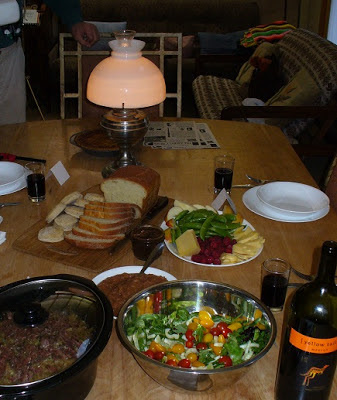 Some time back, as a follow up to the 2011 summer wizarding event, several of the core cohort got together for a shared dinner and 'movie night.'  We dressed up fancy like. Each guest brought a dish to pass.  A highlight of the evening was an Owl Post delivery of letters and packages. 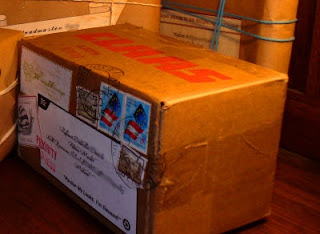 Our Potions Master, Professor W-----, is an especially entertaining personage. Fascinated by the non-magical world, she is also oddly disconnected from it.  Her theory about smiling, for instance.  Professor W's notion is that ""The purpose of smiling to show all of one's teeth." Thus, when faced with a camera and told to "say cheese" she does so with great glee and energy. 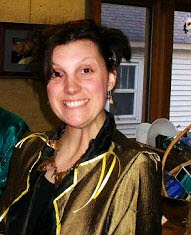 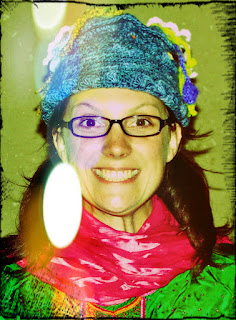 A highlight of the Potions Class she taught was the making of Wizardish Ice Cream.  In fact, it was ice cream made with dry ice. Hoja, my friend who created and plays Professor W, said later that she thought she had the proportion of ingredients right . . . . so it was a wonderful challenge for her to stay in character and storyline when the mixture foamed up most energetically and began to overflow the bowl and the table and pour over on to the floor! (Our Headmaster, who happened by during her class, played along and quietly began to mop up the mess, acting as if this was quite the typical occurrence.)

Professor W's letter and package came from Austria.  Its sender, I presume is not Austrian by birth as he  got the form of address wrong!  This from Executive Planet's item on "Austria: First Name or Title."


"It is most unlikely that an Austrian will ever address you by your first name unless you become extremely well acquainted outside the office and you should follow suit by using the courtesy titles Herr ['Mr'], Frau ['Mrs'] or Fräulein ['Miss'] followed by the surname until invited to do otherwise. The use of first names is a sign of intimacy and social or professional equality and you should not presume to undermine an elaborate system of mutual respect by suggesting to an elder or superior that you might adopt informal Anglo-Saxon practice. An Austrian businessman will introduce himself with his surname only and the appearance of his first name on his business card is not a signal to start using it.

Status and hierarchy are an important part of all Austrian culture. Austrians are very title-conscious. If someone holds academic or professional qualifications conferring the title of professor, doctor, or lawyer, for example, you should be sure to address that person using both the equivalent of 'Mr' etc. and the person's title plus his or her last name. Thus, the appropriate way to address an Austrian professor would be Herr Professor Schmidt. During subsequent conversations with Herr Professor Schmidt, you should maintain formality by continuing to use the title of professor preceded by Herr, but at this point you may drop his last name and simply address him as Herr Professor. Even those with just a university degree are likely to style themselves Herr or Frau Magister. The title Herr or Frau Ingenieur is so common in Austria that graduate Ingenieure stress their superiority by insisting on their full title of Herr or Frau Diplom-Ingenieur.

Occasionally you may encounter highly qualified and/or much honoured Austrians with several titles, in which case all should be used, at least at the outset and in writing, eg. Herr Professor Doktor Schmidt.The rules of precedence for such an array of titles may seem obscure to a foreigner but the correct order will be made clear on a business card, letterhead etc. It is not unknown to find oneself in the company of a professor with three doctorates, which can be something of a mouthful."

Nonetheless, the letter itself was polite, if only slightly marketing-smarmy at the end! And its method of address is displays that charming wizardly ignorance of non-magical postal address conventions such as street name and city. 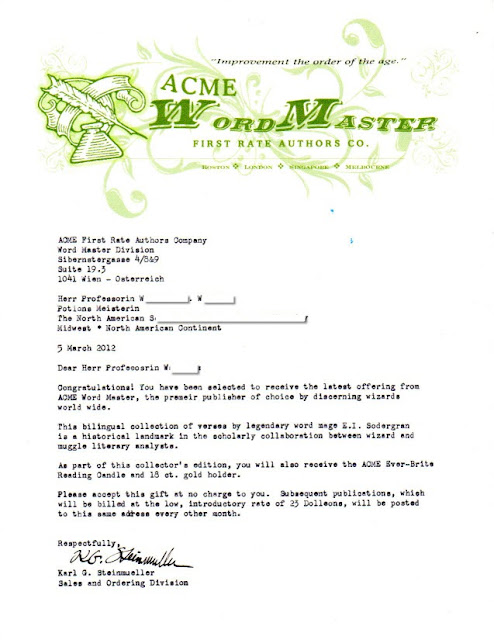 Congratulations! You have been selected to receive the latest offering from ACME Word Master, the premier publisher of choice by discerning wizards world wide.

This bilingual collection of verses by legendary word mage E. I. Sodergran is a historical landmark in the scholarly collaboration between wizard and muggle literary analysts.

As part of this collectors edition,, you will also receive the ACME Ever-Brite Reading Candle and 18 ct. gold holder.

Please accept this gift at no charge to you. Subsequent publications, which will be billed at the low introductory rate of 23 Dolleons, will be posted to this same address every other month.

A note on the letter's creation: The letterhead was a variation on the stationery I made for all of the evening's letters. (Tutorials on how to do it are posted here and here.)  The actual text of the letter was typed on a mid-twentieth century Smith Corona Clipper manual typewriter. The signature was written with a modern calligraphy fountain pen holding a wide nib. 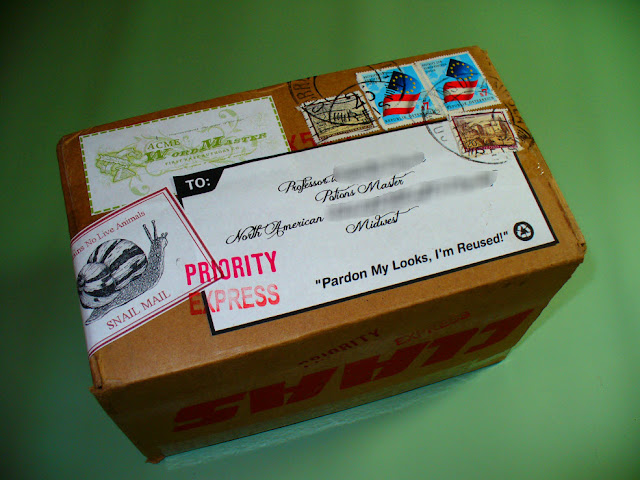 The packaging displayed a keen sense of environmental awareness in its recycling of a previously-used mailer box and polite announcement along the lines of "no animals being injured in its sending." 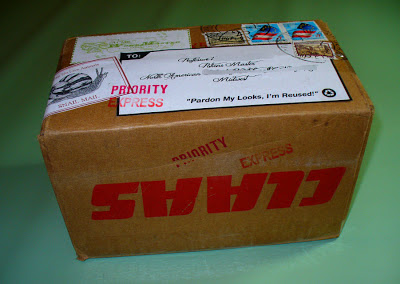 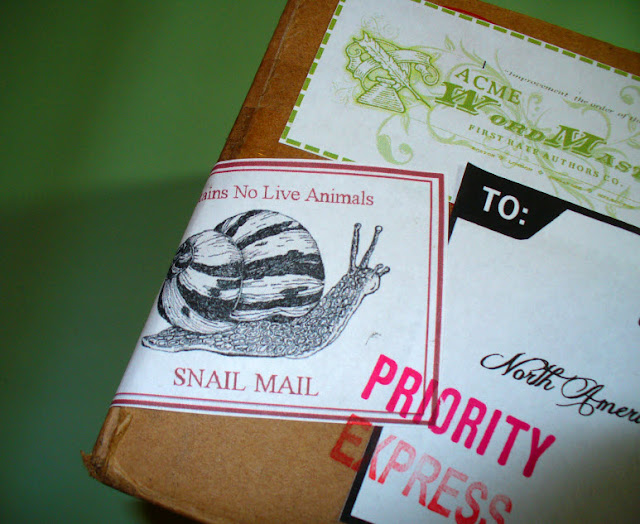 The contents, book and "Ever-Brite" candle, photographed here in my studio before packaging, were selected to mirror an upcoming European sojourn by Actor Hoja who was studying Swedish as part of her preparations. (The timing of her trip would later see her in the Far North of Europe when the winter sun was often scarce; hence the candle.) 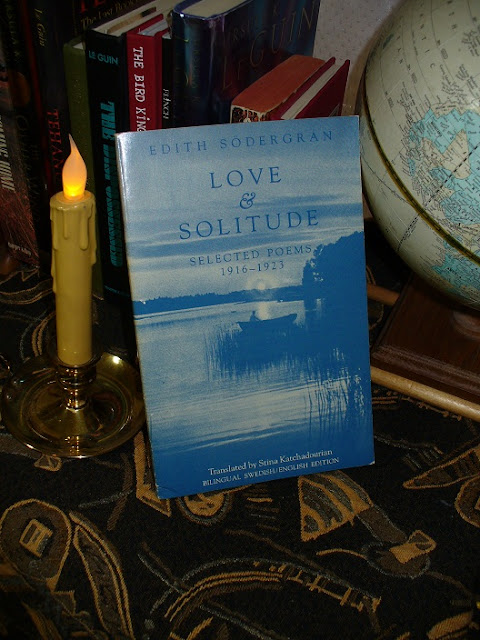 A literary aside (translated by Google from the Finnish Wikipedia): "Edith Irene Södergran (born April 4, 1892 in Saint Petersburg - June 24, 1923 Raivola , Kivennapa ) was a Swedish-speaking Finnish poet. She is an internationally known Finnish poet. Her poems have been translated into at least six different languages. Södergran is particularly known as an important representative of the Finnish-Swedish modernism." 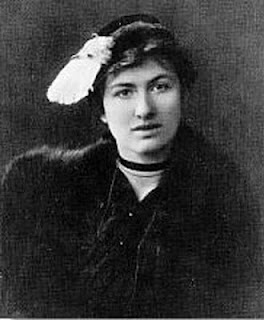 Sodergran's use of language is powerful and evocative. Her poetic eye and heart have a firm grip on the reality of human pain and history.

I long for the land that is not,
for everything that is I am weary of craving.

(from 'The Country That Is Not', translated by Keith Bosley)*

As it sometimes happens, the gift matched its recipient rather well.  For though a playful and quirky character, Professor W (and her real-world counterpart) possess similar qualities of personal and creative depth. 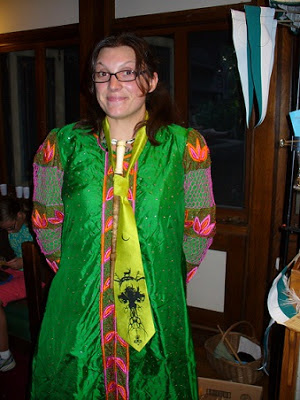 To see all of the posts relating to the 2011 Wizarding Event, click here. The three previous dinner party package postings are here, here, and and here. (The first is titled First of Five.  This is a misprint.)

* This passage is from this page on Sodergran at Books and Writers. 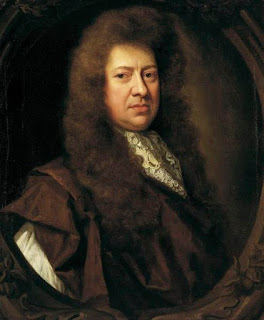 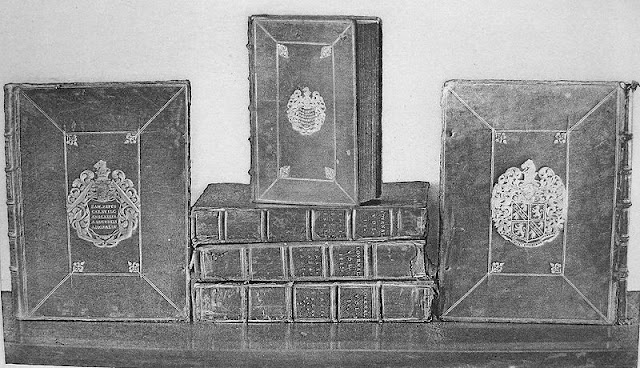 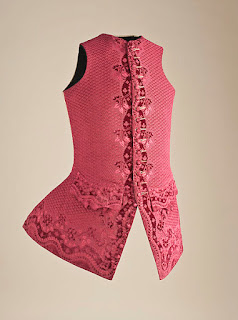