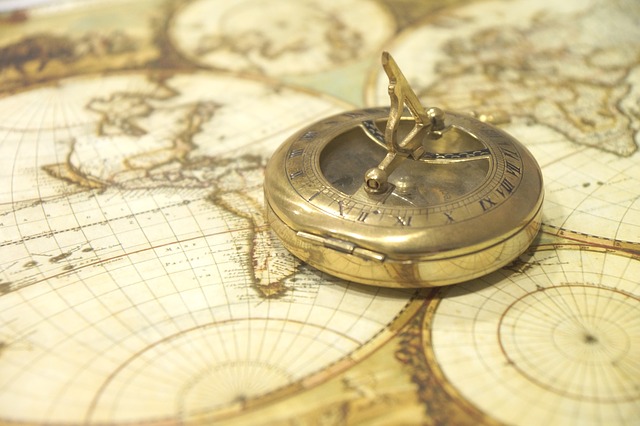 "Words ought to be a little wild,
for they are the assaults of thoughts on the unthinking."
~ John Maynard Keynes ~


Worldbuilding is a long time fascination of mine. Watching others craft worlds is a particular delight.These authors are my favorites:


Several years ago Hoja, my friend and creative colleague, and I found ourselves worldbuilding by happenstance.  She and I took to playing Scrabble at family gatherings. To make it more fun, we changed the rules: 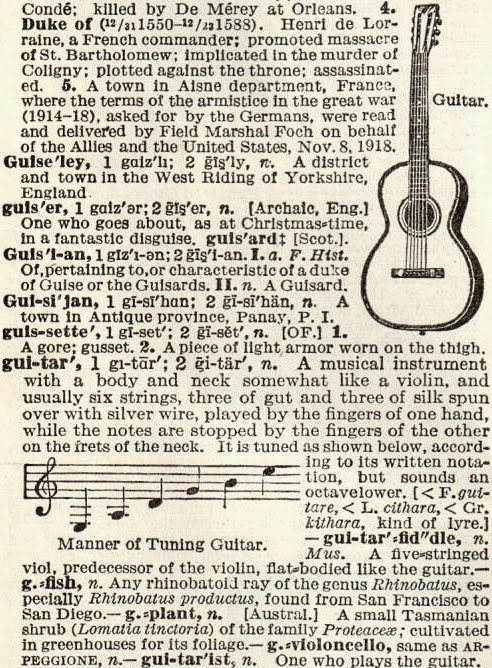 For our amusement we took a photo of the board at the end of our first game, and then the second.  By the third time we played we realized we both seemed to be pulling our words and their definitions from some shared place. 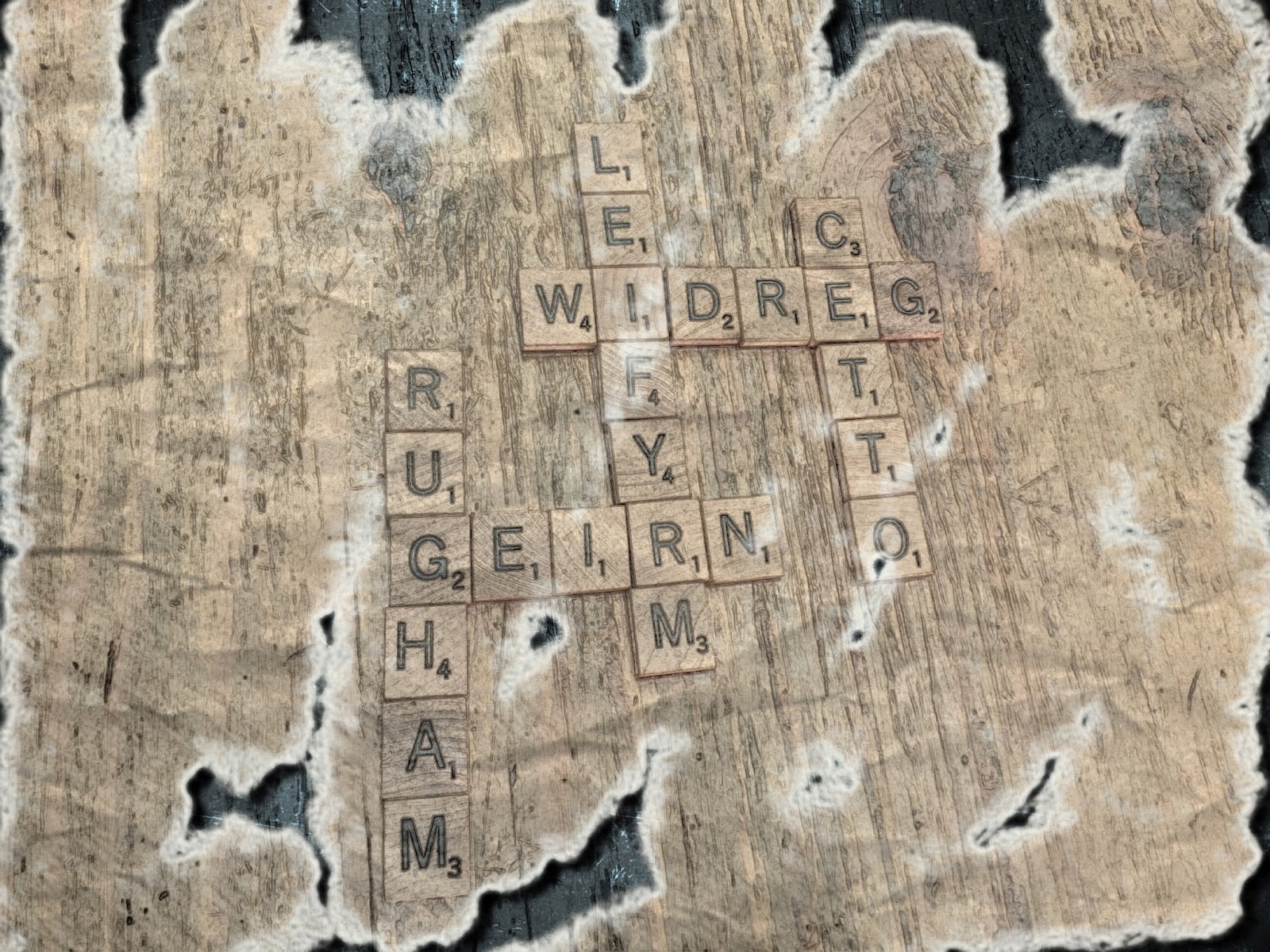 It's been three years of worldmaking now. Our imagined place does not yet have a name (I have one in mind but we've yet to agree if that is it.) Based on coffeeshop or dinnertime conversations (often while playing our tile game), we've a general sense of the geography. Hoja says she is going to see if she can sketch out a map of things.

Once we even tried to create the recipe for a food word we came up with for a grain dish. It turned out splendidly! And while making it as part of a meal one evening we discussed the likely regional variations of the dish - which we've both tried making since then. 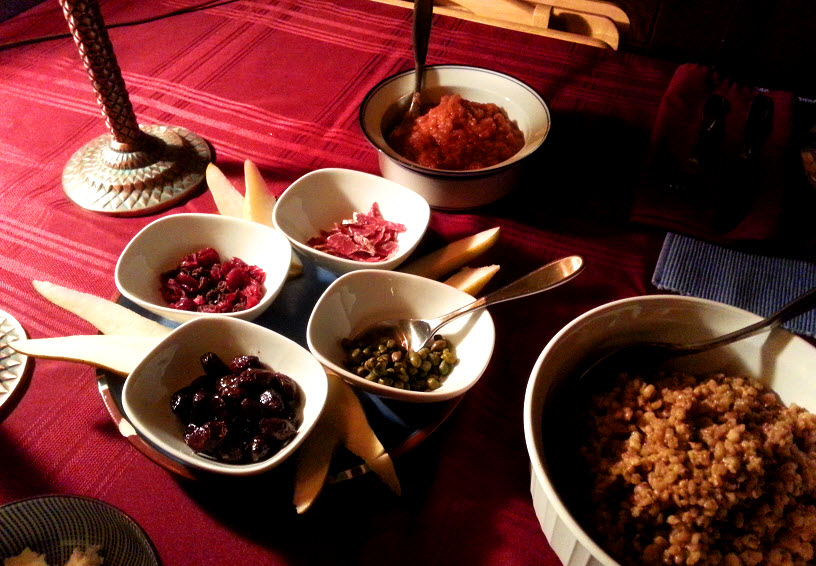 After a while, using a modern Scrabble set seemed odd. I began to think about what "playing tiles" would be like in our imagined place.

That's all it took for me to want to actually make a game set for us. In doing so, the story continued to make itself. I discovered that our fellow imaginaries like to make their own tiles and playing cloths, or have a set made by a friend or long distant ancestor.  Here is what I made for Hoja and myself. We are still working out the back stories for our respective game sets. 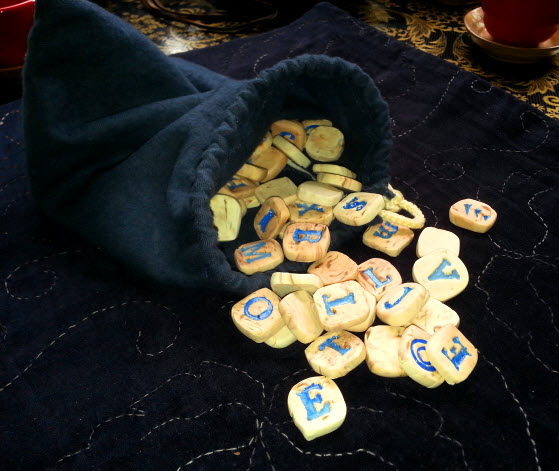 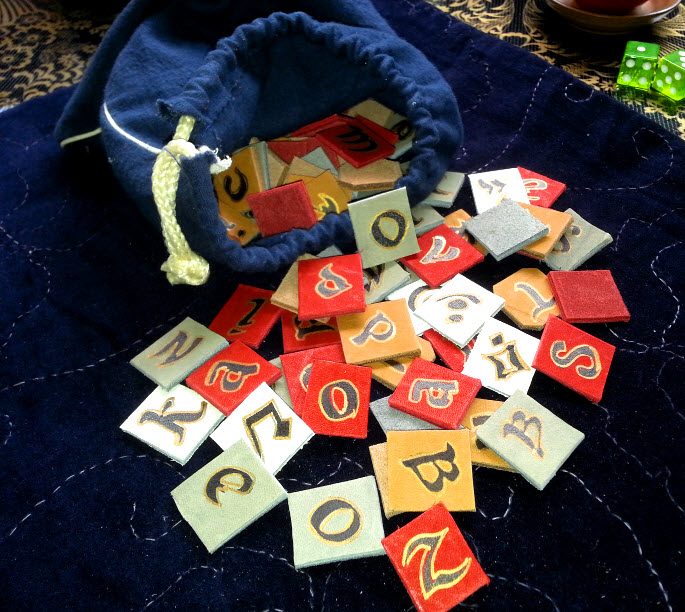 One set of tiles I made using Sculpey plastic clay which I stamped and then painted. I deliberately let the tiles over-bake so they'd look more like old bone. 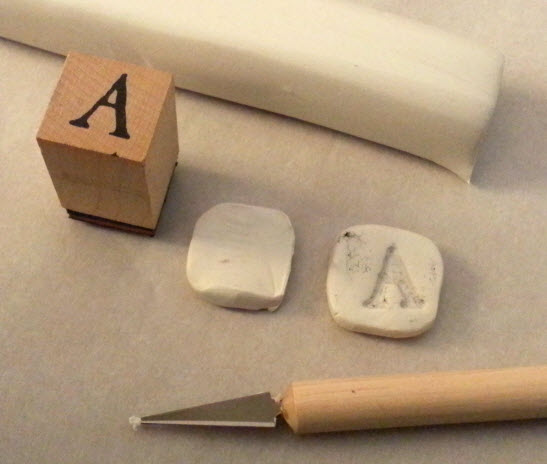 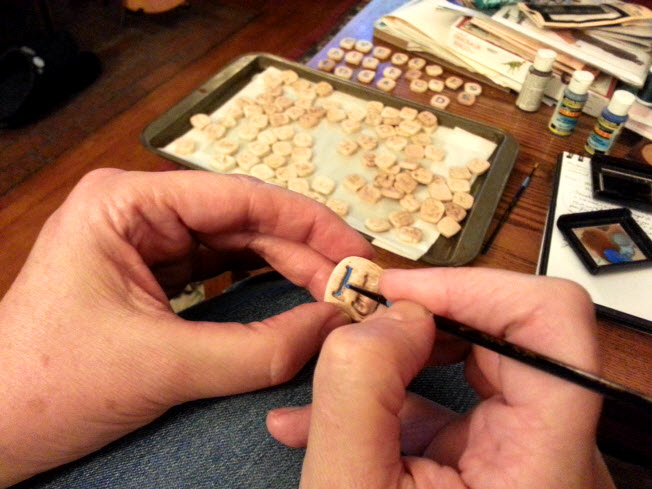 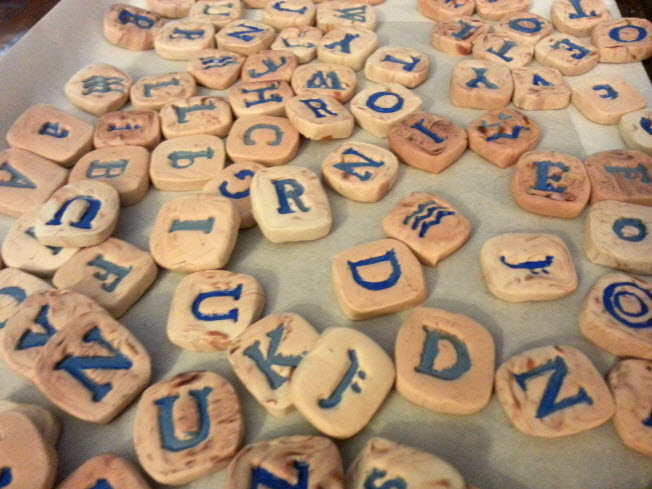 Hoja's set I made from leather. I had a small stash of cowhide pieces in several colors. I cut tiles from each, hand-lettered them with India ink, and added a splash of metallic gold to make the letters stand out. 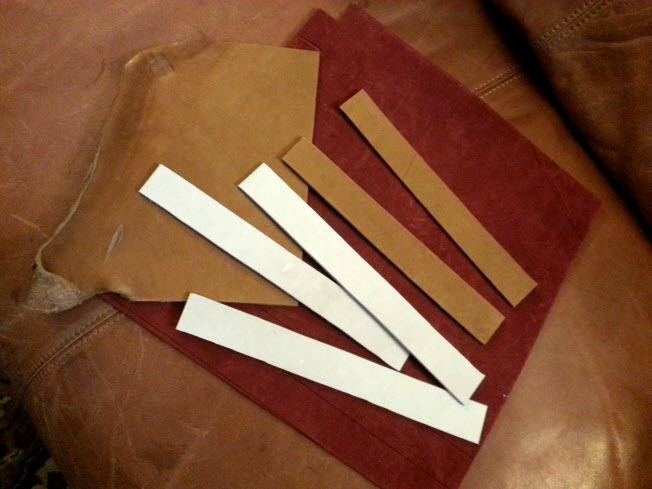 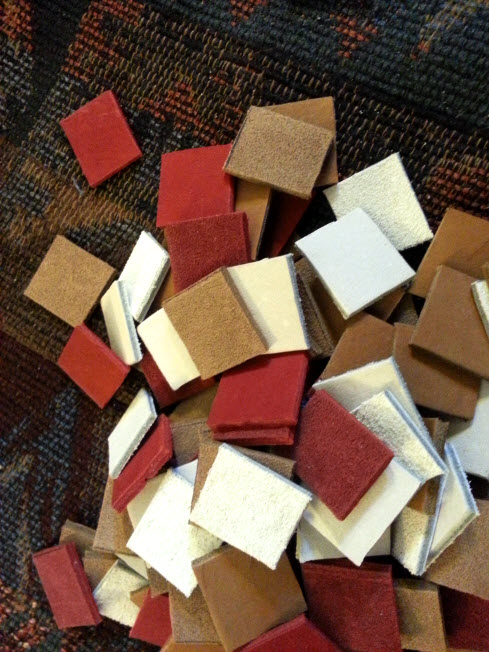 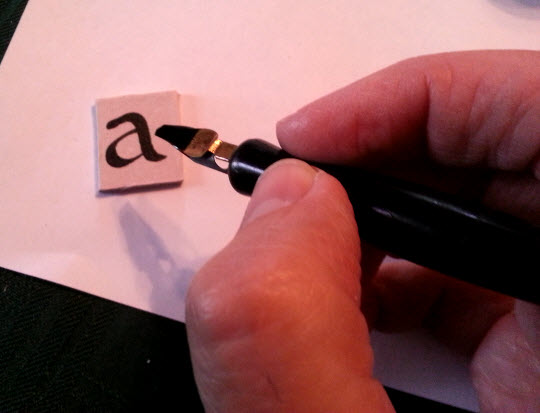 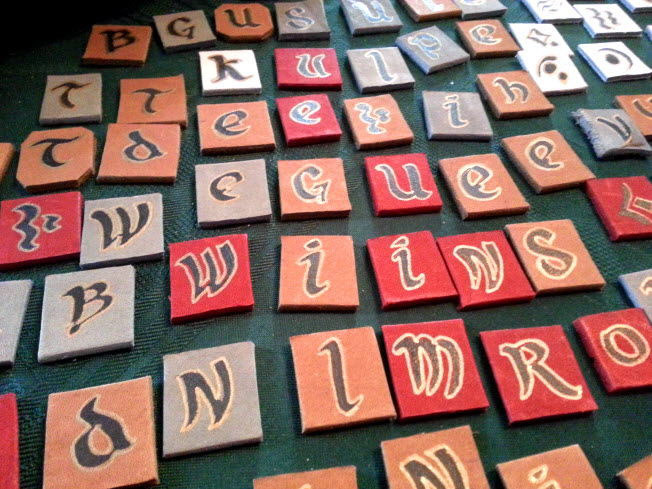 The modern cardboard board was replaced by a two-sided fabric playing cloth. One side was made from upholstery fabric with a pattern that could be used for a traditional tiles layout. The reverse was made from some dark blue cotton velveteen. Hoja is fond of ground ivy so I embroidered large ivy leaves on hers. Mine captured another world: the map of Anarres from Ursula Le Guin's The Dispossessed. 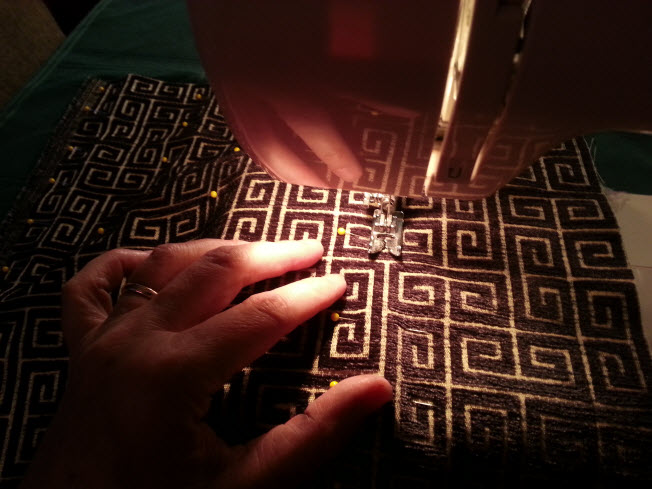 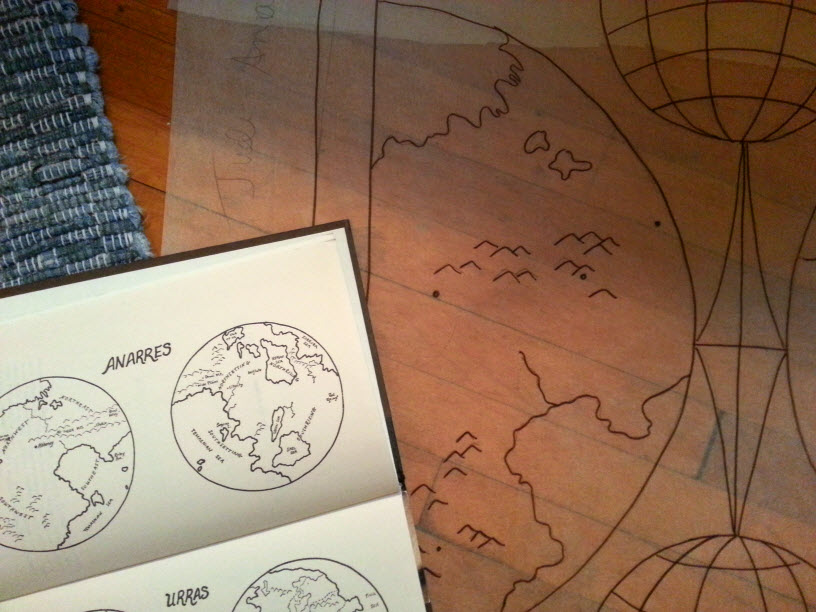 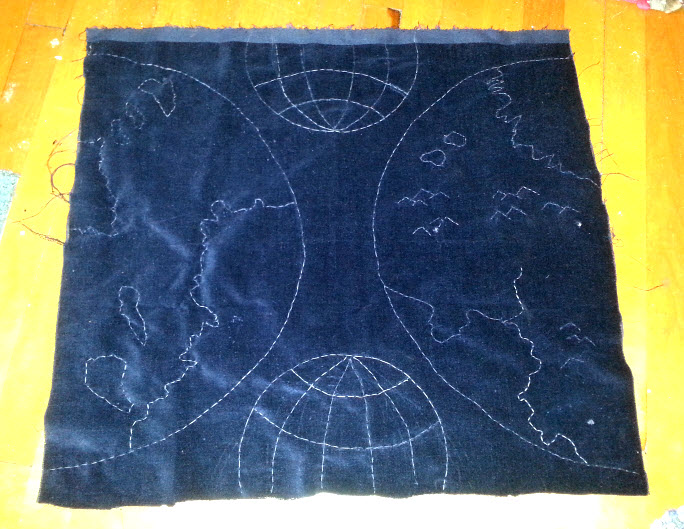 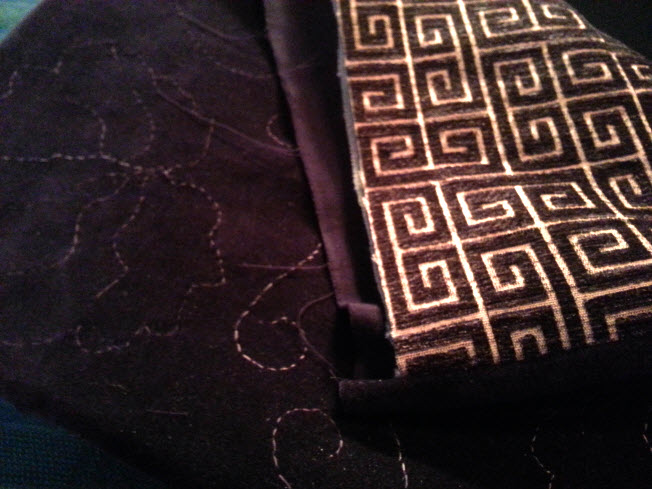 As I sewed and embroidered I thought of the imagined people with whom we might play. This led me to think that the playing cloth might be used for other games as well. So the finished playing set included a stitched bag with marker pieces: sea shells for me, river stones for Hoja.  I found some green dice, a pair for each of us, and finished things up with a pair of varnished chopsticks to hold the tiles during play. 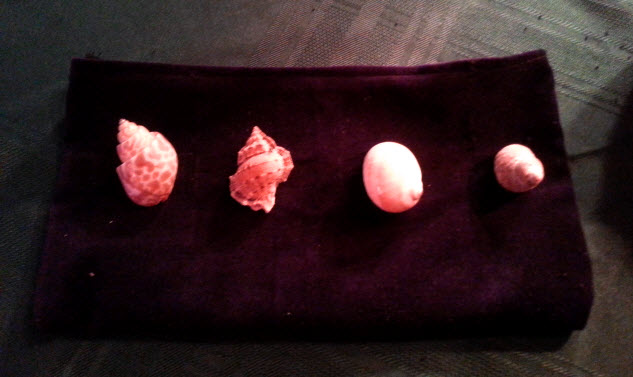 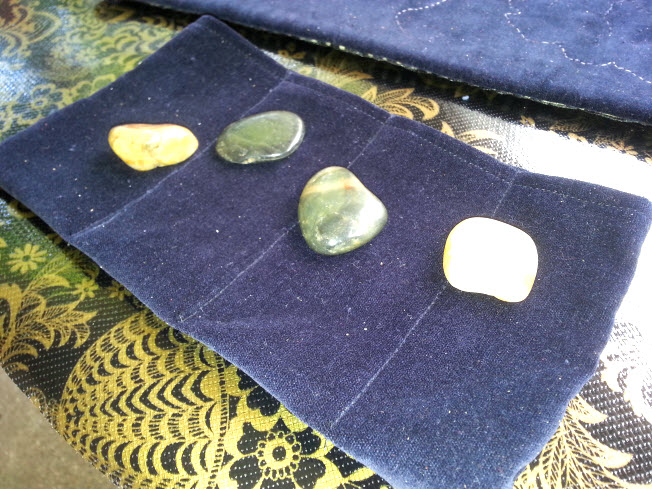 The bags for the tiles, dice, and playing markers I made from an old pair of flannel travel bags for shoes, trimmed short to be more portable. 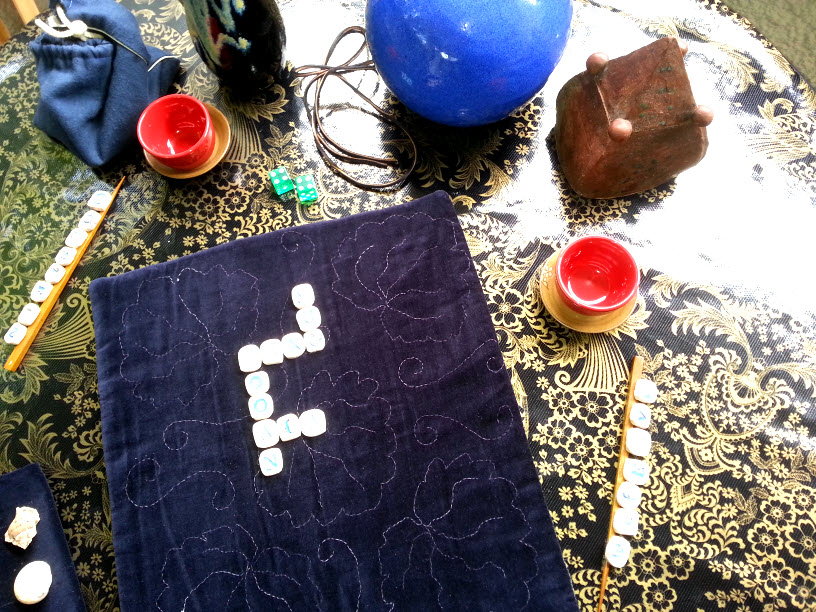 The sticks were rolled up inside the playing cloth and the roll was then tied with a leather strip. 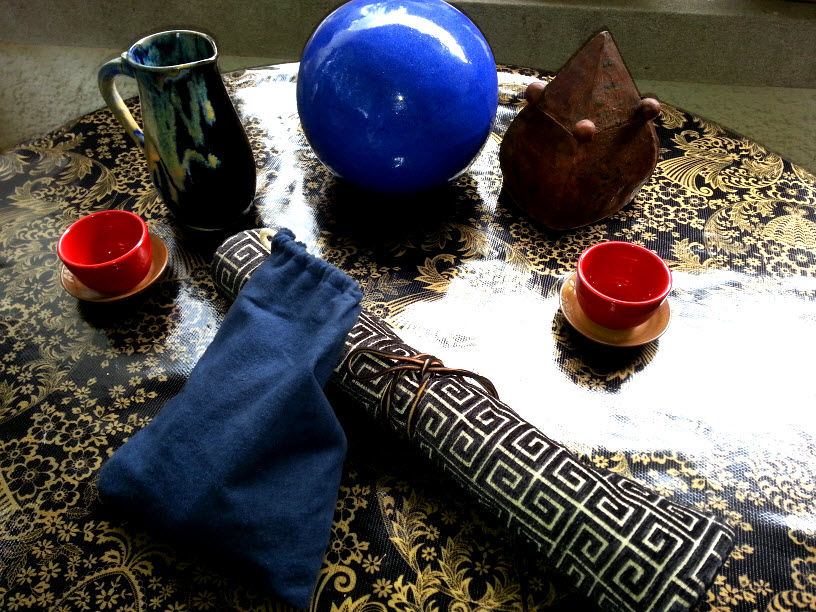 I couldn't wait until the Yule season to give Hoja her gift! We met at a park overlooking a lake. I told her the story of the games' making. It sparked another round of shared story building: names of people, descriptions of a house one had inherited and was now making her own, and the beginnings of the cartography of the place.

Our land is not perfect, nor are its people. Nor are we as we create it all. And at this point there is no real end goal. Hoja and I have talked about collaborative writing projects, but this land may or may not be the setting for our stories.  And although we've had the chance to see each other since that afternoon by the lake, we've both been terribly busy. We have yet to actually play our now-real fictional game.

"You can change your world by changing your words....
Remember, death and life are in the power of the tongue."
~ Joel Osteen ~