To "Bill in California" 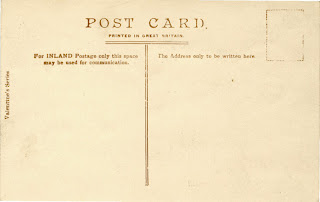 You are too kind. Always glad to entertain a fellow funster! (I trust you received the letter and Amanda's story?)

Yours in amusement and postalosity,
Ed

The play universe of imaginary correspondences has its own space-time continuum.  The following arrived  over ten years ago. 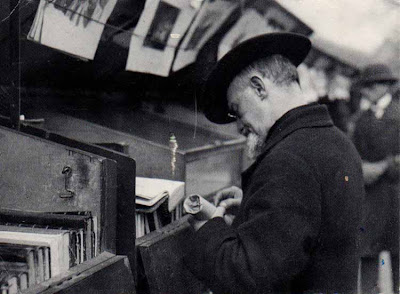 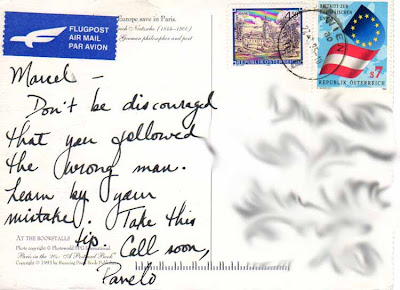 TRANSCRIPTION:  "Marcel -- Don't be discouraged that you followed the wrong man.  Learn by your mistake.  Take this tip.  Call soon. Pavelo"
More from the imaginary postal world can be found on this site via this link.
Posted by J.A. at 5:05 AM

SENT OUT: Postcards in the Snow

Had a full day and night of beastly rainstorms here: the perfect time to catch up on some 'imaginary postcards.' 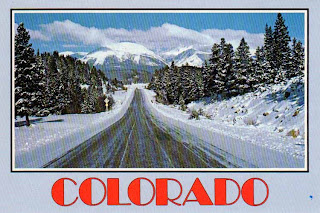 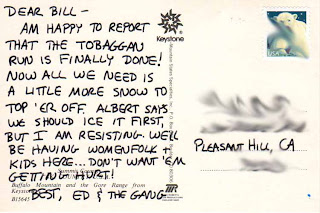 TRANSCRIPTION:  "Dear Bill -- Am happy to report that the tobaggan [sic] run is finally done! Now all we need is a little more snow to top 'er off.  Albert says we should ice it first, but I am resisting. We'll be having womenfolk and kids here. Don't want 'em getting hurt! Best, Ed & the Gang" 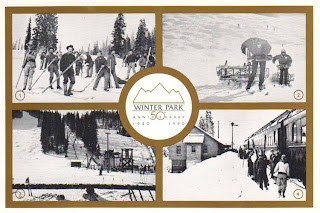 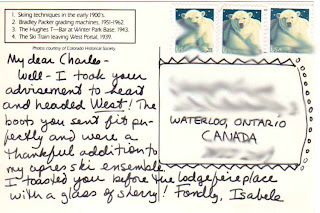 TRANSCRIPTION: "My dear Charles -- Well - I took your advisement to heart and headed West! The boots you sent fit perfectly and were a thankful addition to my apres ski ensemble.  I toasted you before the lodge fireplace with a glass of sherry! Fondly, Isabele"
[Editor's note: Presumably Mlle. Isabele offered a toast to her friend with a glass of sherry rather than toasted the gentleman himself!]
Posted by J.A. at 5:18 AM

A letter-writing friend sent me the following from Massachusetts.  She said she was driving around and spotted it on the roadside. 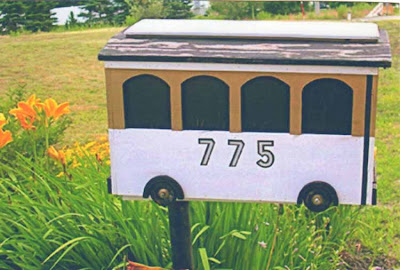 Check out her lovely blog: Random Acts of Whimsy.
A lady after my own heart she is! Thank you, K!
Posted by J.A. at 1:58 PM 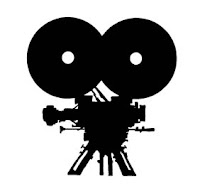 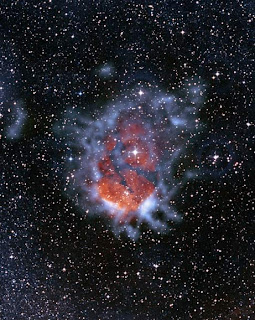 As a synesthete, I have to be careful sometimes that I do not get overwhelmed by the colors, light, and sounds so often elicited by what I see and hear.  Summer, with its rush of colors, is an especially challenging season.  And the art of others can sometimes create whole symphonies of shapes, brightness, and sounds.
The decorative work of Victoria MacKenzie-Childs is a synesthesiac universe all on its own.  Her furniture, glassware, tableware, apparel gifts, etc. are a gorgeous blast of color, fun, and imagination. 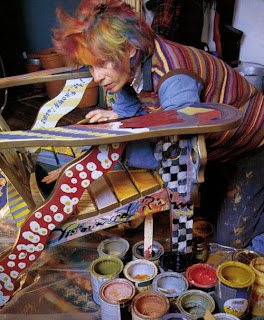 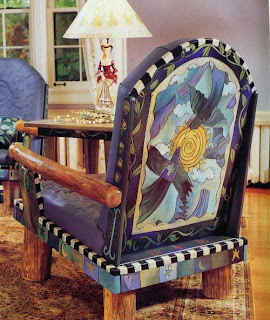 These two images are from Fauxology's discussion on MacKenzie-Childs.
What I find so exciting about her work, other than its color and obvious craftsmanship, is its frisky and gay theatricality.  It makes me think of what I might find in Dinotopia, the fantastical fictional world created by artist James Gurney. 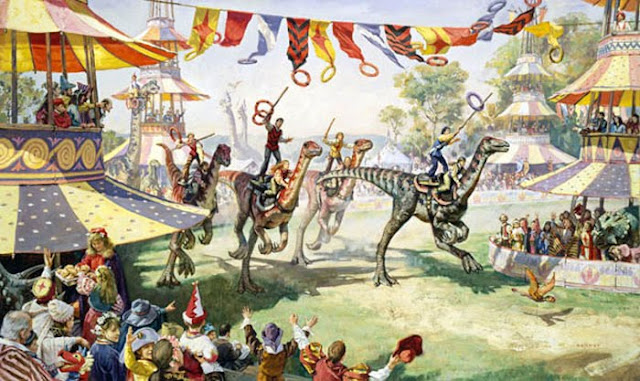 Images from James Gurney's Dinotopia website.
Which makes me think of what I might wear if I visited Gurney's world - which makes me think of the amazingly rich and detailed creations by the folks as Moresca Clothing and Costumes.  A mix of Renaissance Faire, antique Middle Eastern dance,  A Midsummer Night's Dream, and Charles de Lint, the Moresca world of dress is one I would happily inhabit every day. 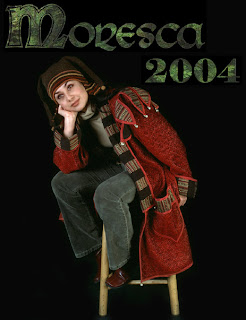 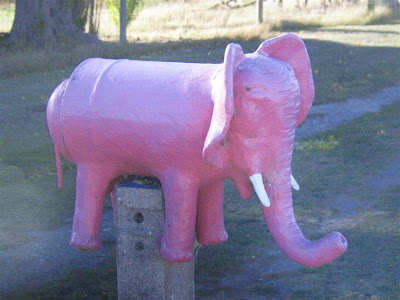 Image source
I usually don't like listening to narration, but this voice and the images meld wonderfully together like newly made lemon curd, smoothly buttered.


500 Years of Female Portraits in Western Art
by Philip Scott Johnson
Music: Bach's Sarabande from Suite for Solo Cello No. 1 in G Major, BWV 1007
performed by Yo-Yo Ma
Posted by J.A. at 4:11 AM 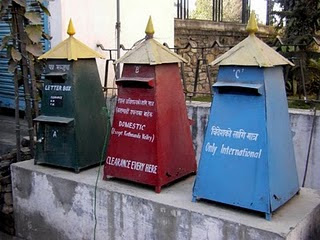 "Courtesy to David from France"at the Gulfmann Collection.
Nepal postal letter boxes, located in Kathmandu.
For pics of the entire collection click here.
Posted by J.A. at 5:02 AM 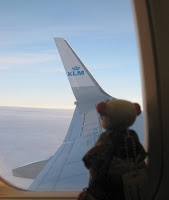 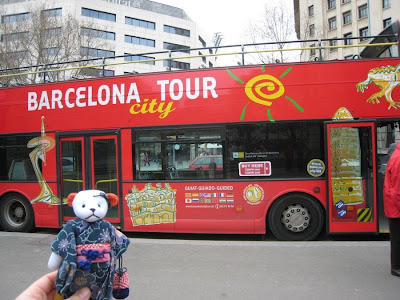 I know I still have the small yellow stuffed dino one of my students gave me once upon a time.  Methinks wee 'Ferguson' has some travels ahead of him!
Posted by J.A. at 12:11 PM 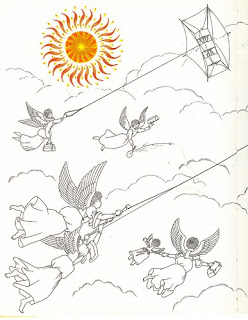 A few months ago my brother, Architect, sent me an email. Knowing my background as Info Queen (Info Königin in German, which is how I was first christened!), he asked me if I could find a book he had loved as a youth. He couldn't remember the author or the title . . . only some notion of the story and a clear memory of the images which, of course, he couldn't show me.
Here is what he asked:

I have a special request. I'm searching for two books from my childhood .... They've come back to me in dream and memory, but of course I can't remember the names or authors, only certain images .... [and] incorporates angels designing animals. (Amazon has over 39,000 entries for children's books that include the term "angel" -- I've only reached 700 -- no help so far). I remember the style of artwork distinctly: very crisp, delineated line work, clear colors; and the plot vaguely -- a young angel at a drawing board is charged with inventing animals (to go with letters of the alphabet or something?). He has a number of false-starts inventing impractical animals (and suffering the snickers of older, more experienced angels) before finally succeeding and being ready to use the gold ink (or crayon) to create an illuminated page. It was the architecture of the floating buildings that caught me, and the style of drawing used to illustrate a story about drawing and designing.

The book turned out to be Lion by William Pène Du Bois. It won the 1957 Caldecott Medal.* Here's what I did (and I have to brag; it took me only 20 minutes to locate his book).

Reply from Architect: "Your search Kung Fu is strong indeed!" :-D (Info Queen always appreciates positive feedback!) Here are some images from this delightful book and information on how to locate a copy, if you are so interested. 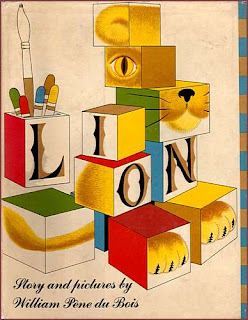 Cover of the original book. 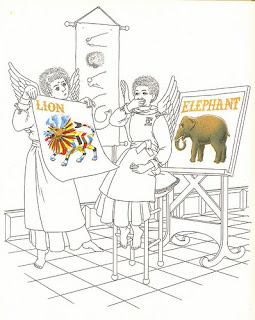 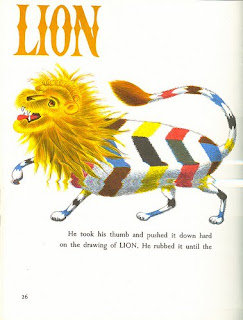 These 2 page images and the one at the beginning of this post come from eliz.avery's Flickr stream.
As for locating the book, it will be a minor adventure. (Public libraries may carry it, but given that it was first published over a half-century ago, it's not guaranteed that they will still have copies on their shelves as children's books wear out fast from use.)
The Wikipedia item on the author, William Pène Du Bois, lists the title of this book as The Lion rather than just Lion. The original publication date is listed as 1957.  (eliz.avery in the aforementioned Flickr stream lists 1963, which is probably a reprint date.)
The Library of Congress (LC) record for this item shows the title is Lion and the publication date as 1956:

How different search sites list the author's name can vary. Libraries will typically use the LC version as this is how the LC folk standardized it and libraries usually use the catalog record info for their own online catalogs. Book seller sites (such as those listed below) may list the author as Dubois, DuBois, Du Bois and may or may not include Pène (sometimes spelled Pene <-- no accent mark).

A search on Amazon brought up used two hardcover copies priced at $16. No cover image provided. The publication lists the Vintage Books first edition, but it is not clear if the used copies are also first editions.
Alibris **, a speciality site for used books, music, CDs, etc. had other books by Du Bois (he was also an illustrator) but nothing for Lion as of 24 June. Abebooks  ***, another used books website listed two 1983 copies, both ex-library books, for $1; the descriptions did not indicate hardcover or paperback and no cover illustration was provided. Powell's Books in Portland, Oregon -- a longtime and much beloved institution -- lists a single copy for $34 described as "Used Hardcover / Children's Collectible - General."
P.S.  The second book mentioned by Architect turned out to have been authored by Du Bois as well and was titled The Twenty-One Balloons.
_________________________________________

* [from the website of the Association for Library Service to Children]: "The Caldecott Medal was named in honor of nineteenth-century English illustrator Randolph Caldecott. It is awarded annually by the Association for Library Service to Children, a division of the American Library Association, to the artist of the most distinguished American picture book for children."
** [from the Alibris website]: "Alibris (pronounced “uh-LEE-briss”) is the premier online marketplace for independent sellers of new and used books, music, and movies, as well as rare and collectible titles. We connect people who love books, music, and movies to thousands of independent sellers around the world. Our proprietary technology and advanced logistics allow us to offer more than 100 million used, new, and out-of-print books to consumers, libraries, and retail business partners. Alibris was founded in 1998."
*** [from the Abebooks website]: "Launched in 1996, AbeBooks is an online marketplace where you can buy new, used, rare and out-of-print books, as well as cheap textbooks. We connect you with thousands of professional booksellers around the world and millions of books are listed for sale."
Posted by J.A. at 5:46 AM