A Summer Hat for a Wizard, Part 2 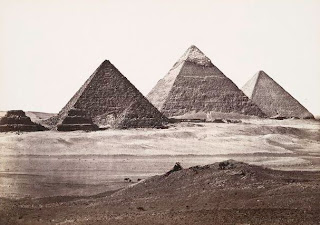 The Pyramids at Giza,
Photograph by Francis Frith, 1862
Image source 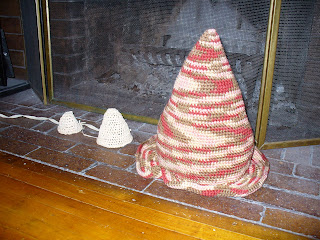 "The wizard hats of Giza"
Photo by me
Part 1 of this report suggested that the wizard hat making was going along swimmingly . . . oops!

I'm afraid "One of the flayrods has apparently gotten out of skew on the treadle."* Which is to say I went off track at some point. Actually, at two points.  I tend not to use patterns when I crochet, so if something isn't looking right, I just make adjustments until it does.  And when it comes to keeping track of row numbers and stitches, I often lose track of where I am (even when writing things down as I go).
With the yarn version, this wasn't a problem as the yarn worked up more tightly.  The resulting hat had "soft lines" and could be worked back into shape without much notice.  The raffia fiber worked up very differently.  It's a soft fiber when on the spool, but when crocheted takes on the nice stiff quality of a straw hat.  This is exactly what I wanted, but it also meant the stitch sequence needed adjustment. 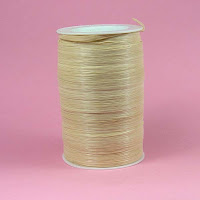 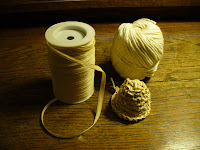 "Rayon raffia ribbon - 100yds/roll, MATTE OATMEAL" sold by Gifts International, Inc., a California-based retail group.  Their price for the rayon-raffia was about $4 less per roll than what I'd found elsewhere (both locally and online).  And they had a wide range of colors. 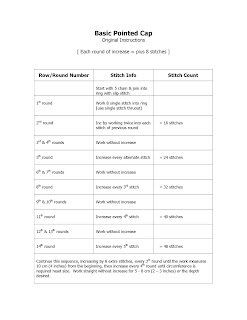 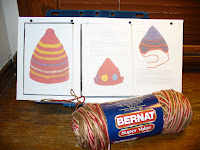 Here's the pattern I've been working from.  It is for a small child's pointy cap.  (Click on the image of the pattern to see it in full-size -- you may need to click on the image a second time to get the largest view.)
For the first test with the raffia (pictured above next to the spool of raffia and ball of white cotton yarn), I crocheted over a strand of the cotton yarn. The raffia seemed so fine that I didn't think it would hold its shape.  It didn't take too long to see that this wasn't a problem.  (If it had been, I would have needed to switch to a cotton yarn closer to the same color as the raffia.  The cotton fiber was fatter than the raffia and showed through, no matter how hard I tried to positioned it as I worked.)
The second test produced a wonderful hat (at least until I lost track of my stitch count!).  The tight, single-crochet stitch created an slightly open texture.  When the headmaster actor saw this, he was quite pleased.  The event is to be held in late July and he wanted to be sure his hat - which he'd have on all day - wasn't too hot to wear.
Here is a close up of a straw hat of my own.  Commercially made, it is also crocheted, but with a heavier fiber.  Though comfortable, the hat is heavy to wear and gets hot after awhile. 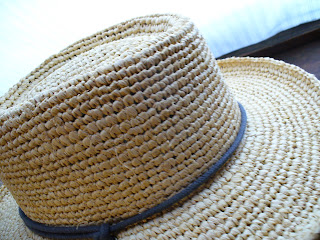 And this is the raffia version.  You can see the openings between stitches; this will let air in.  And it is quite light by comparison to the store-bought hat. 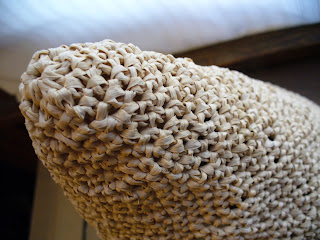 Here is the raffia version in full.  You can see where I lost count; it bulges out on one side.  My attempt to repair that using decreased-stitches every 10 stitches or so only meant the hat now looked like a funny, large gourd! 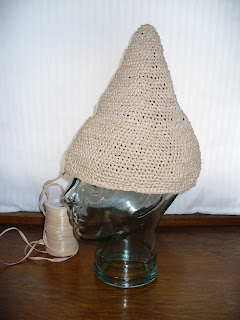 The Headmaster actor was in town recently and we did some try-ons to see how things were working out as far as his envisioned hat. (Even with the faulty shape, we could get an idea of how things were going.) 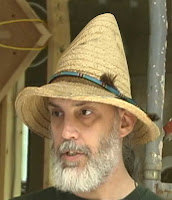 Original vision
The actor in his favorite straw hat - photoshopped to show cone height.
Key to his vision was the hat's height (about 12 inches from brim to top) and the cone shape (which he wanted to be very gradual, rather than pointy like a traditional witch hat). We stretched the yarn version onto the crown of the straw hat to check the overall height.  This he liked.  He told me, too, that he liked how far out the brim of the straw hat extended as compared to the yarn version. 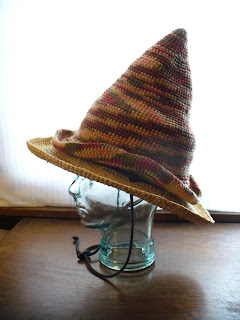 Then we put the Test 2 raffia hat onto the straw hat. 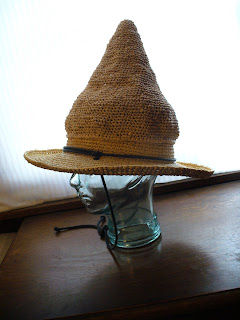