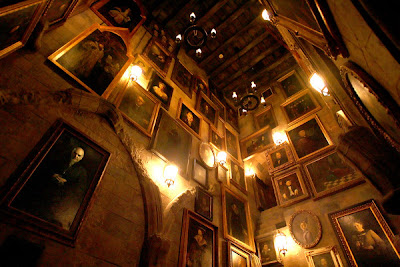 Image and text from The Orlando Sentinel: "One of the galleries of talking wizard portraits inside Hogwarts Castle, on the way to the Harry Potter and the Forbidden Journey ride at the Wizarding World of Harry Potter, at Universal's Islands of Adventure in Orlando."

The Summer Wizarding Event is proceeding in increments.  Last weekend, we had another planning meeting to draft an activities timeline for the day and chat about other concerns.  One is who people are going to be: the characters or personas needed for the story to work.
Due to various constraints of the life and time variety, I will not be able to play a role on the actual day of the event.  I will be present, however, in a most playful and imaginative way.
The event is being styled as a new student orientation for this year's incoming class at a Hogwarts-like school (but one set in the Midwest). Part of the set decor will be moving portraits of wizards and witches gone by.  I got to see a prototype of one during the planning session.
This prototype -- which involved a computer screen within a picture frame -- had a looped video running, nothing fancy, just some footage of a man eating his lunch. What made it so convincing, though, was the workmanship of the construction, the quality of the picture frame and matting, and the composition of the imagery and lighting. 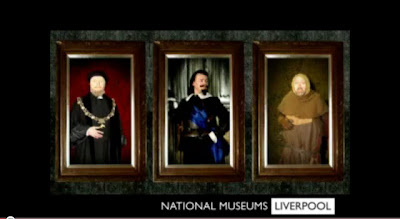 These "talking portraits" from the Magical History Tour exhibition at Merseyside Maritime Museum in Liverpool, England are the kind of thing we have in mind.  A video of these gentlemen in action is located at this link.
The prototype's designer mentioned the need to have some "real moving portraits" made up for the event.  I thought I might be able to come up with something.  Fortunately, there doesn't have to be any sound; just an old-style silent movie about 5 minutes in length. Here's what I've got so far in terms of garb and personal ideas. 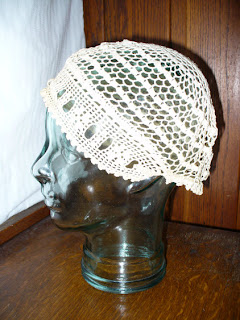 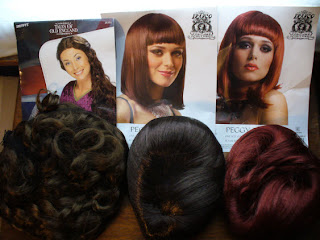 Several Wigs
Character 1 is to be a Lady Bard, tuning a guitar and "composing" a song.  These are some of the images inspiring the look and 'plot' of her actions. 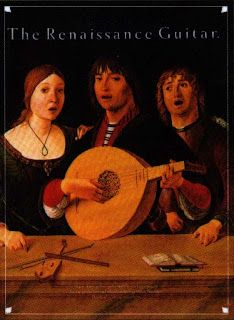 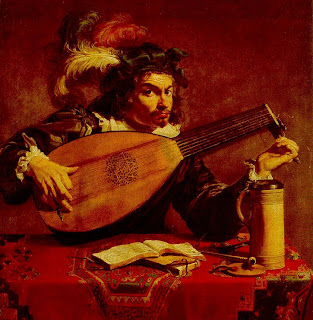 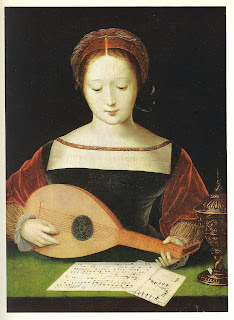 Image source
This silk-like jacket (Laura Ashley designer item found at Goodwill for $2.50!) I will repurpose into a fitted bodice. My plan is to make it sleeveless with with snaps along the sleeve-line so I can wear different sleeves for different looks. 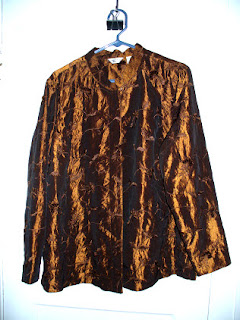 Love them Goodwill drapes!  This green cotton will be made into your standard issue, floor length gathered skirt. 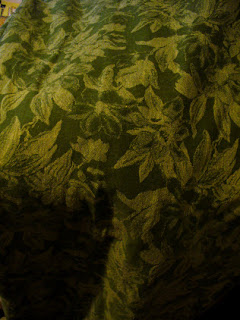 Character 2 is to be a cartography or astronomy scholar/professor reading and taking notes with an ink dip pen.  These two paintings by Vermeer are the inspiration.  My costume, though, will be more Renaissance and more garish. 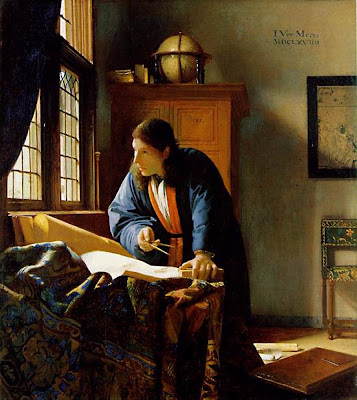 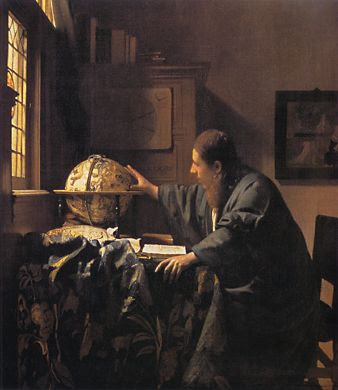 I have an academic gown and a wonderful multi-cotton, much embroidered coat with very similar lines. 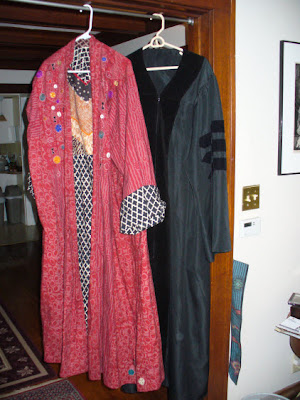 And my professor will be wearing a ruff. Nothing quite as polished as the image below, but about this size. 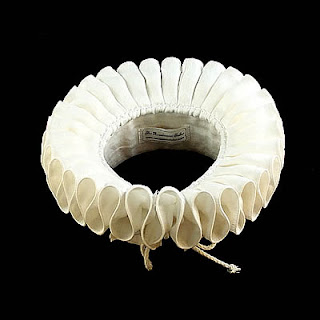 Image source
(1) below is the wired ribbon and cord that I will use for making my ruff. 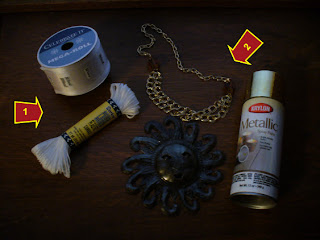 Miz Professor will also be wearing a rather ostentatious medallion on a chain.  (2) above shows the chain I bought at World Market from their clearance section, the sun object for garden decoration, and the shiny brass Krylon paint I will be using to make the sun match the chain.
Characters 3 are two Renaissance-era people playing chess (my nephew Actor and I are working up the 'plot" for this one). 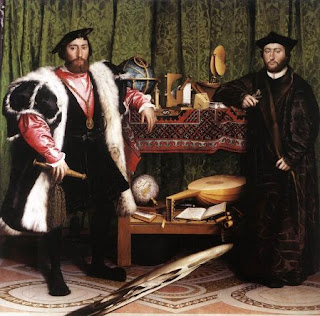 Hans Holbein's painting, The Ambassadors is the inspiration for our personas. We're hoping to create the effect Rowling described in the books of people walking in and out of each other's portraits. So my character will be the same cartography/astronomy professor above.
Actor will be playing another character the day of the event, so it is necessary for his chess player persona to look markedly different from his event persona.  Actor is blond, so we thought we'd give him a bit of courtier's dash and daring by darkening his hair and giving him a goatee - this picture of Leonardo Dicaprio is our guide for the make up. 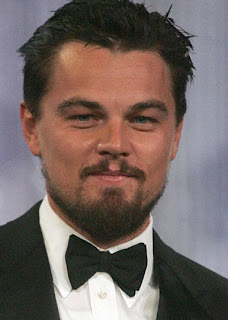 We'll both be wearing the "flat cap" that was the baseball cap of that era: i.e., everyone wore them! 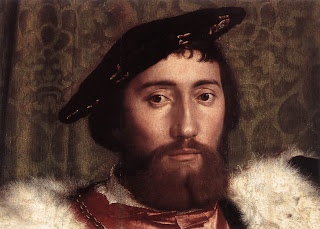 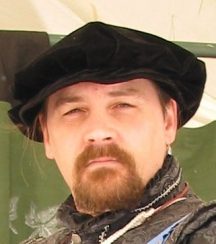 Image source
Since we're still in the planning stages, that's the latest so far. I will post updates on the actual making of the costumes and "film sets" as well as a few still shots of the finished characters for your entertainment later.
Posted by J.A. at 4:11 AM