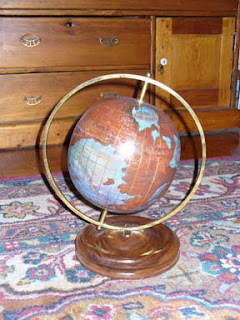 About this globe - see note at end of post
Everyone has their favorite books. The Dispossessed by American author Ursula K. Le Guin is one of mine. I read it for the first time the year after it was published (1974). Since then I have read it at least once a year. How I read it varies considerably. Sometimes I read it straight through from start to finish. Other times I read only the chapters set on the planet Anarres. Often I just open the book randomly and read a few pages.

Several aspects of the book appeal to me. The complexity of the world building by Le Guin is profoundly attractive. This includes the physical worlds, their cities, their climates, and their flora and fauna. It's not a matter of how well she visualizes things for her reader. It goes deeper than that. Although Le Guin's world building is framed by the socio-political context of the 1960s and 70s, she manages to create a place with a solid and unique sense of its own reality. 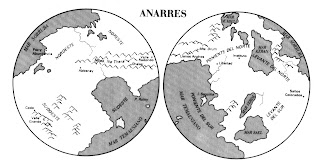 The cultures of the two worlds (Anarres and Urras) are deliberately set in conflict with each other, but each culture stands on its own in terms of its psychology, sociology, customs, and ways of being. As a one-time theater major and long time imagineer I am always captivated by how culture(s) manifest and make of themselves. Much of my time reading the book involves my imagination crawling around Anarres mostly, but also Urras, trying to see how the buildings are built, the clothing designed and made, the food recipes preferred, and the people interacting.

The quality of psychological differentiation possessed by several key characters from Anarres is something I find very satisfying. I like, too, that the major characters (Shevek, Takver, and Bedap) are comfortably intellectual while also plainly social and creative. It is unusual, however. In a 1990 short story "The Shobies' Story," Le Guin created a decidedly less savory character who is identified as being from Anarres. 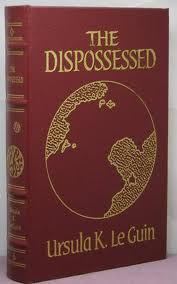 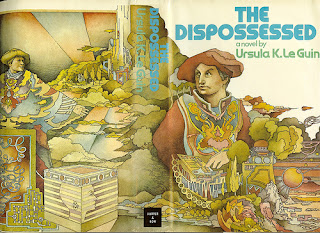 Finally, I am intrigued by the utopian discourse that underlies the story and its characters. This book always strikes me as an imagination in motion - even though the story is long since published, the events set, and the politics gnawed to death by reviewer after reviewer. Le Guin wrote The Dispossessed as a deliberate thought exercise. I find myself continuously drawn to and curious about how writers create. And Le Guin is a master writer.
Other people's thoughts on the work:

Study Guide for Ursula LeGuin: The Dispossessed (1974)
This guide was prepared by Professor Paul Brians of Washington State University. It's one of the more detailed and thoughtful takes on The Dispossessed I've seen.

A review of The Dispossesed by Victoria Strauss (2000).
I have my own personal and literary take on the book. It's always interesting to read someone else's perspective. This review focuses pretty much on the plot and politics alone. (Missing is a sense of the characters as people and the two very detailed cultures Le Guin has created.)

BOOK: The New Utopian Politics of Ursula K. Le Guin's The Dispossessed. Edited by Laurence Davis and Peter G. Stillman. Lexington Books, 2005. ISBN: 978-0739110867
This is a thoughtful set of essays ending with a short piece by Ms. Le Guin herself. She liked this book, saying: "This is criticism as I first knew it, serious, responsive, and jargon-free." The book is erudite and scholarly. An interesting read but one that also demonstrates how scholars can sometimes kill the underlying joy of a story by focusing at length on its meaning.

BOOK:  Political Theory, Science Fiction, and Utopian Literature: Ursula K. Le Guin and The Dispossessed. By Tony Burns.  Lexington Books, 2010. ISBN: 978-0739122839
I haven't read this yet so I cannot comment.  But here's the blurb from Amazon: "This work challenges both the widely accepted view that 'The Dispossessed' represents a new kind of literary utopia and the place of Ursula K. Le Guin's novel in the histories of utopian/dystopian literature and science fiction."

NOTE:  The Making of the Anarres Globe
As this book has so long been central to my life, I wanted to create some thing that would give me a personal, physical connection to this imaginary place.  Having once made for a friend an elaborate ink and colored pencil map of his much cherished fictional world - Anne McCaffrey's Pern -- I set about creating a map of Anarres.  But it never seemed sufficiently real.
I took my sketches and ideas to my brother, Architect, and asked him if he could help me work up a 3D sketch.  He came up with a schematic using an image he'd found online (and included above in this post).   But I still struggled to make the map.  Meanwhile, unbeknownst to me, Architect had contacted two other siblings, WoodCrafter and Artist; and the three of them conspired to make my planet for me. 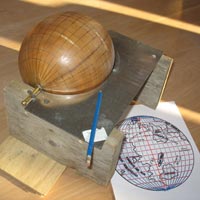 WoodCrafter found the materials (wood and metal)
and created the sphere, base, and globe carriage. 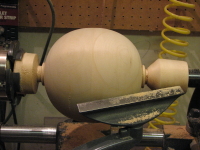 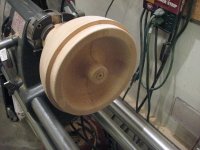 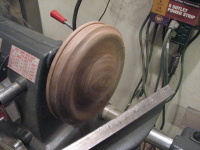 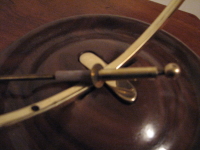 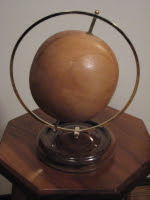 And Artist, using her considerable skills with paint, line,
and stagecraft, painted the map onto the now 3D surface. 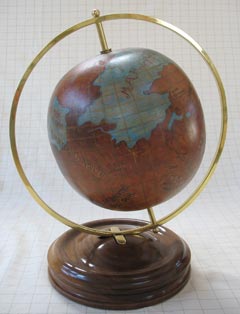 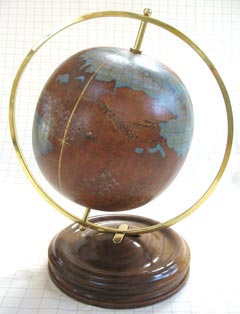 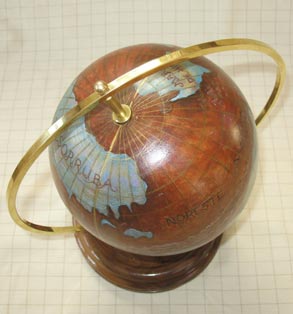 It was -- is -- a truly astounding gift and a profoundly well-imagined and well-crafted work of art. It is perfect.  It looks like an artifact from Anarres - not like a cardboard globe one buys at map stores.  It looks like something the book's main character, Shevek, might have in his workplace or that might be found at one of the children's learning centers.  It is a deeply made thing
Posted by J.A. at 4:03 AM