From The Captain: A Postal Minute Message 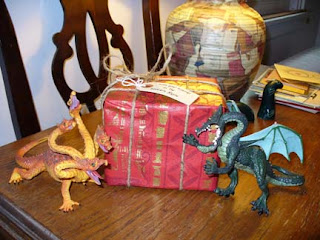 Dragon Post
(precursor to Dino Mail)
Photo by me.
In several earlier posts* I presented postcards sent to me by my late brother, The Captain. He was a man given to much whimsy. If there was anyone who took great joy in entertaining the world, often without their knowing it, it was The Captain. In July of 1998 he sent me an ePostcard. Knowing my love of all things paleontological, he invented a lovely little history of postal delivery in the dinosaur era.

Dino Mail
The first delivery of mail was done in the metezoic epoch with large land walking dinosaurs who would use vestigial folds of flesh in the inner mouths to act as a dry mail pouch for the mail being sent. Much like the modern carrier pigeon, the dinosaur was able to remember the route back to its previous stop by utilizing the smells of the different plants in the area. As dinosaurs were not able to contract the common cold, there was little chance they would lose their way during their olfactory rounds.
They were able to carry large amounts of postal goods and they were later fitted with large carry packs to move packaged goods. The high rate of dinosaurs inadvertently biting loaders to death during the filling of the mouth pockets combined with a large comet crashing into the earth and creating a large dust mass forced these magnificent mail carriers into an early retirement. Me and The Captain