The Coolness That is Stars 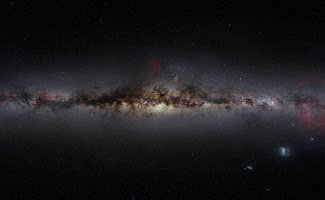 The last time I truly saw the stars was over 40 years ago - on a late night star-watching adventure with my older sister Cee who was (and still is) an astronomy buff.  Now, city lights drown out the vastness and beauty above.  I can only see the major constellations: Orion, Ursa Major, Taurus. . . .  It's like being malnourished to have so little when so much is there.
Nick Risinger has done an awesome thing.  Here's his own description of it:

"The Photopic Sky Survey is a 5,000 megapixel photograph of the entire night sky stitched together from 37,440 exposures. Large in size and scope, it portrays a world far beyond the one beneath our feet and reveals our familiar Milky Way with unfamiliar clarity. When we look upon this image, we are in fact peering back in time, as much of the light—having traveled such vast distances—predates civilization itself.

Seen at a depth thousands of times more faint than the dimmest visible star, tens of millions of other suns appear, still perhaps only a hundredth of one percent thought to exist in our galaxy alone. Our Milky Way galaxy is the dominant feature, its dusty arms sweeping through the frame, punctuated by red clouds of glowing hydrogen. To the lower right are our nearest neighbors, each small galaxies themselves with their own hundreds of millions of stars."

Here is his link.  Go there. Be awed.

And then think about how much we miss on a regular basis - and check out the International Dark-Sky Association, a group whose goal it is to reduce man-made light and return the sky to us.  One can have street lights, and house lights, but there's a way to do it that limits the impact on the visibility of the stars.
Posted by Judith at 4:17 AM