Packages for an Imagined Event: Item 12 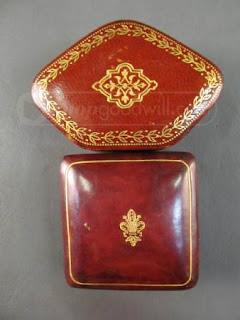 
Of late I've been finding interesting boxes and small cases at our local Goodwill shops.  It seems to go in cycles.  Perhaps with Spring springing more folks are clearing out their closets and attics. 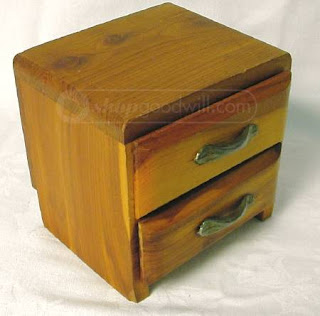 In making the "perfect postal packages" for last summer's wizarding event often the boxes were what made the package perfect.  In the case of Package 12, three containers made it all work. 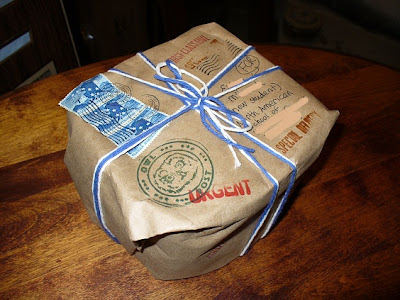 You can see right off from this odd folds of the paper wrapping that there was something unusual about the contents of this package! 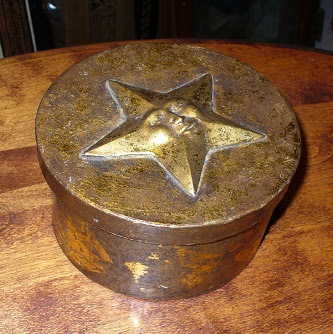 The round, outer box was a lovely gold-painted paper mache thing I'd received as part of a gift from a friend in Europe some 20+ years ago.  Over the years it's held wrapped candies, paper clips and post pins, sewing tools, jewelry, mini-cassette tapes, and many other miscellaneous oddments that needed a temporary home.  It was the perfect start to a magical package. 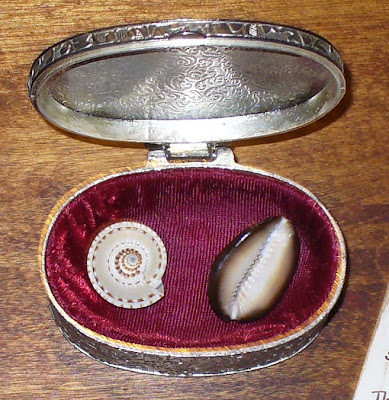 I don't recall where this little faux-silver boxlet came from.  But it was the perfect size for holding two small seashells from my 'nature collection' of items.  Both shells showed red and purples in their coloring, which went well with the dark velvet lining of the boxlet. 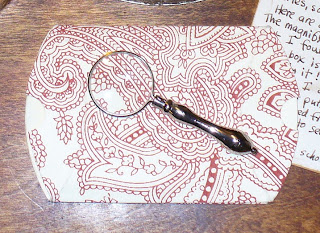 Several of the new wizarding students received small magnifying glasses in their packages.  I'd found an inexpensive set of them at the ever awesome American Science & Surplus shop. (We here in Milwaukee are one of the lucky 3 cities to have an actual brick store, but you can also find some fantastic stuff at their website here.)

The challenge was to make each glass somehow unique in its presentation. In this case, I used a folded box made of heavy cotton rag paper and printed in nice, dark red ink. 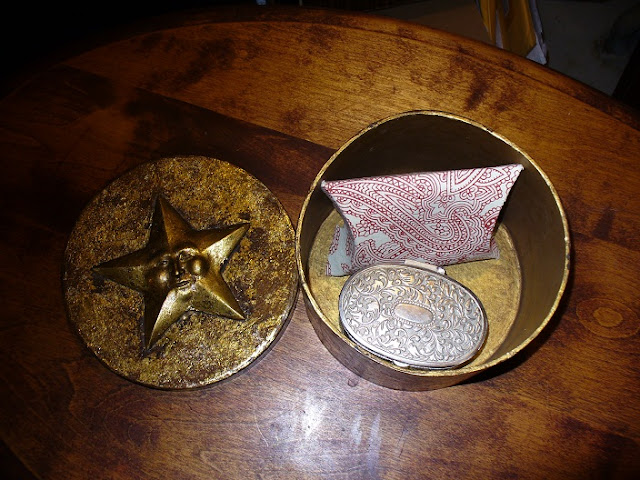 The two items fit rather nicely into the gold sunstar box.  Now it was only a matter of writing up the proper letter to accompany it all.  I was struck by the way the 3 containers, though unique, somehow went together.  It's a little hard to see in these pics, but the gold paint on the sunstar box was elaborately applied in a slightly swirled pattern.  The folded paper box had a flowing paisley design that seemed to move at times.  And the little silver box had a rush of embossed curly shapes on its top and sides.  All this motion suggested to me a kind of "changing magic" and thus the letter was inspired. 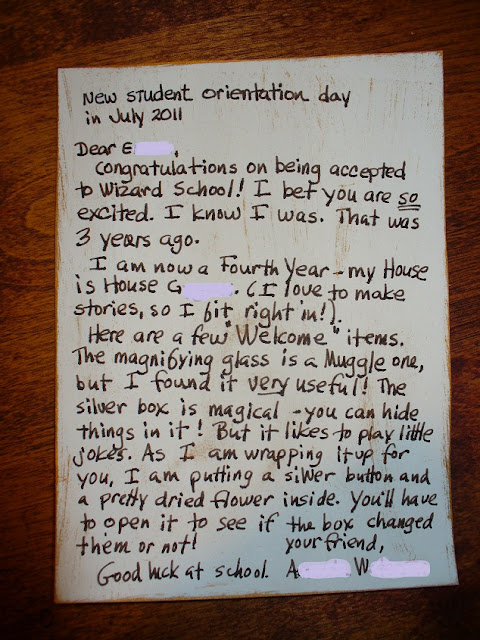 Congratulations on being accepted to Wizard School!  I bet you are so excited.  I know I was.  That was 3 years ago.

Here are a few "Welcome" items.  The magnifying glass is a Muggle one, but I found it very useful.  The silver box is magical - you can hide things in it!  But it likes to play little jokes.  As I am wrapping it up for you, I am putting a silver button and a pretty dried flower inside.  You'll have to open it to see if the box changed them or not!


This letter was written on rather plain white linen-y stationery.  I used my Art Deco era Esterbrook 407 "Dip-less" pen with Higgins Eternal Black Ink for the writing.  But the  letter looked a bit plain after that.  So I took one the inkpads I use for stamping, the gold one, and gently brushed it over the front and back of the page to give it a slightly aged appearance.  Still not enough "effect" I thought.  So I added some gilding to the edge of the paper as well. 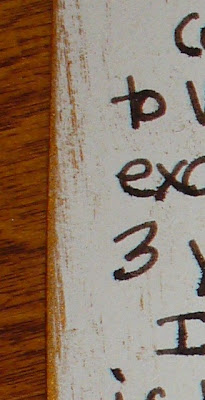 The letter was folded and placed on top of the items. 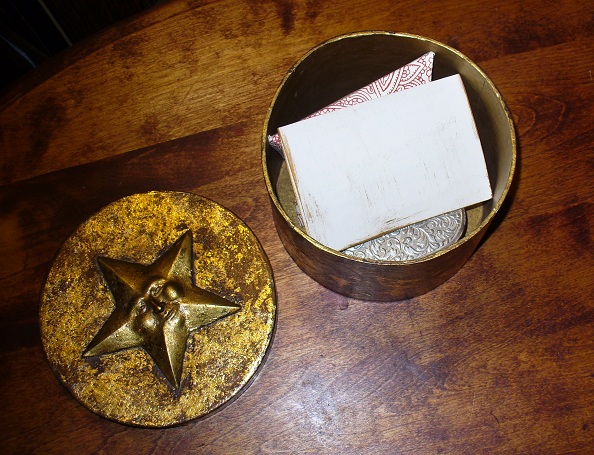 Since the young lady who wrote the letter was, ostensibly, a Fourth Year student at our imaginary school of magic, the stamps were local, i.e., good old U. S. of A .  Though in this case, local also meant about 60 years old!  My father-in-law, Professor Science, very kindly gifted me with a package of old, still viable U.S. postage stamps.  (He'd had them appraised and, after finding they weren't of much value, was happy to pass them on to me and my Letter Games.) 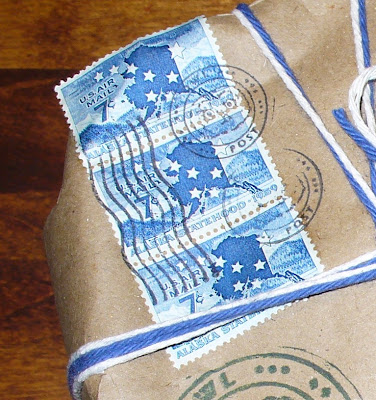 The stamps were hand cancelled using the custom-made Owl Post stamp I'd designed for the event.  A larger version of the same design was stamped below.  As for the other delivery stampings, I like to think they were put there by an over-eager Postmaster who wanted to make sure this student received her package on time! 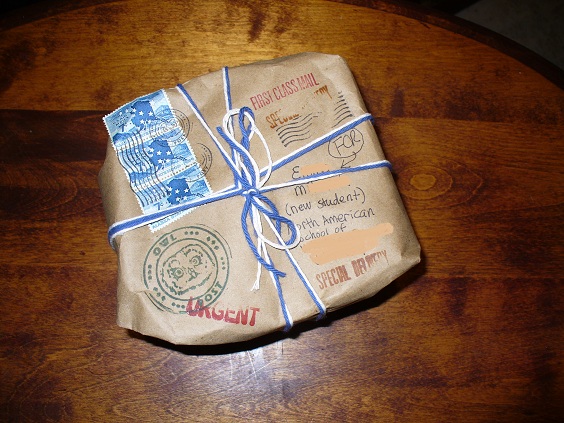