It Was a Dark and Stormy . . . Typewriter 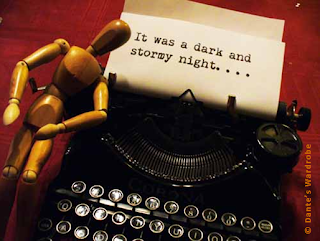 Word on the wizarding street is that we may be getting the band back together.  That is, there is talk among the folk who put together last summer's Wizarding Event that they might do a new one in 2013. To that end, new props are being created and new and improved sets designed. 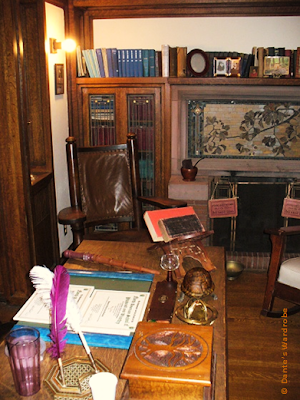 One important set is the Headmaster's Office.  Each actor will be responsible for his or her main set.  In this case, the Headmaster actor (my brother Architect) is thinking that a few old and funky desktop typewriters might heighten the entertainment and curiosity levels of the wizarding students.  So I was asked to keep my eyes peeled for unusual and/or weird, and preferably inexpensive, machines.  The Gods of the Typosphere were with me; I recently found two acceptable items.

The first was a real bruiser: a 1940s-era IBM Electromatic, also called the IBM Model 01.  It came from the household belongings of my Dad's two sisters.  They both worked as secretaries and we think this is one of the machines they used along the way. The very eclectic "Mr. Martin" includes a well-written history of this machine along with some useful links at his site. 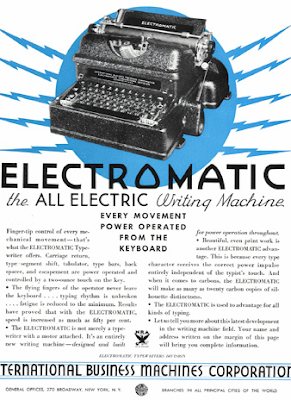 Because Architect is not formally a typospherian, I created an information document about the Electromatic that contained pics of old ads and the PDF of a service manual I found for this line of machines (a very lucky find).  This was important because the Aunties' machine was thickly covered with cobwebs and dust and not working.  (I plugged it in when I got it home . . . can you say arc-of-blue-white-sparks, boys and girls?)  Part of that info included these wonderful comments from  my colleagues over on the Yahoo Typerwriter Forum:

"There is no other machine that evokes industrial brutalism quite like this one."

Architect took some lovely pictures of the machine. (He cleaned it up and installed a new power cord. He reports that, unfortunately, it now hums mightily but the keys do not work. Any ideas as to why this might be, oh readers who geek out on such matters?) 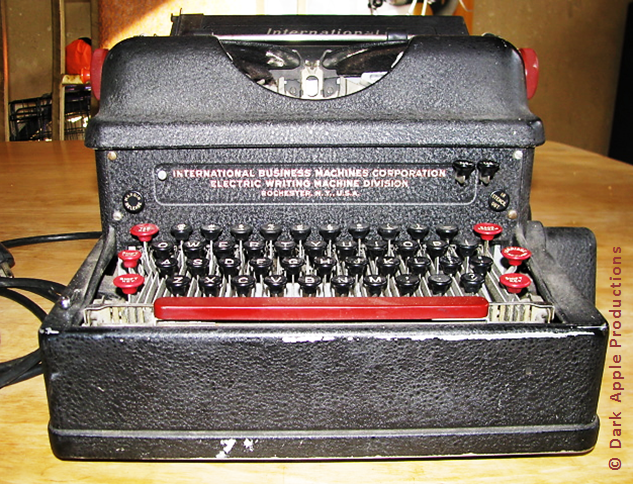 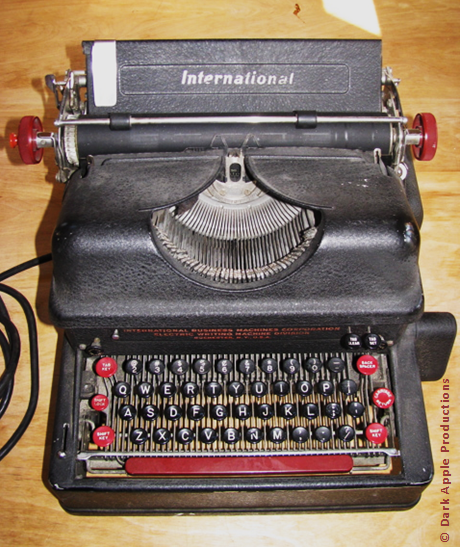 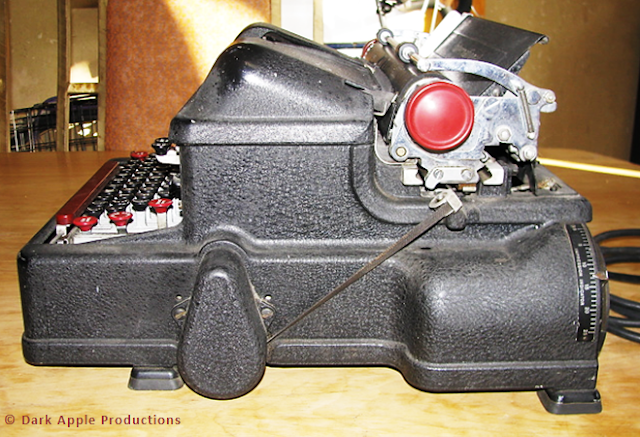 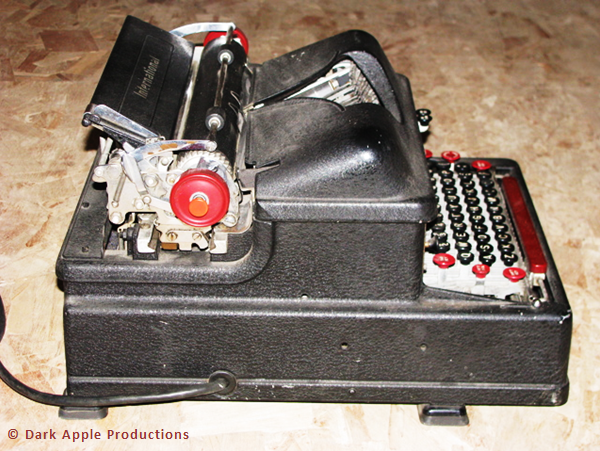 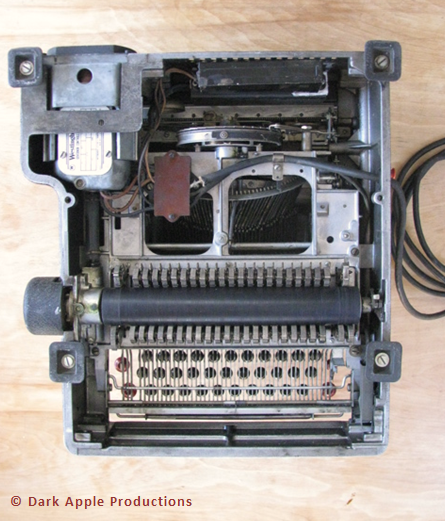 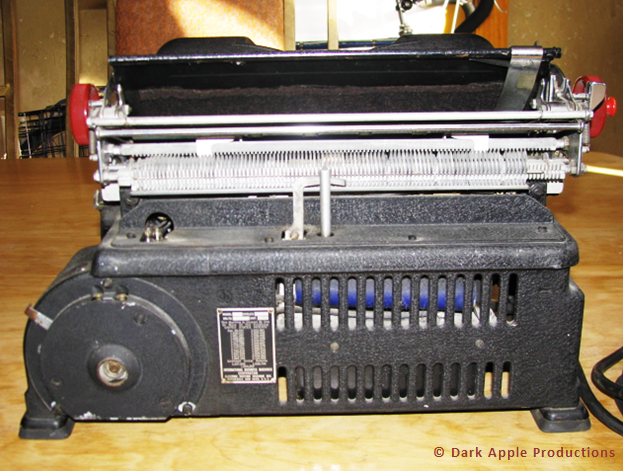 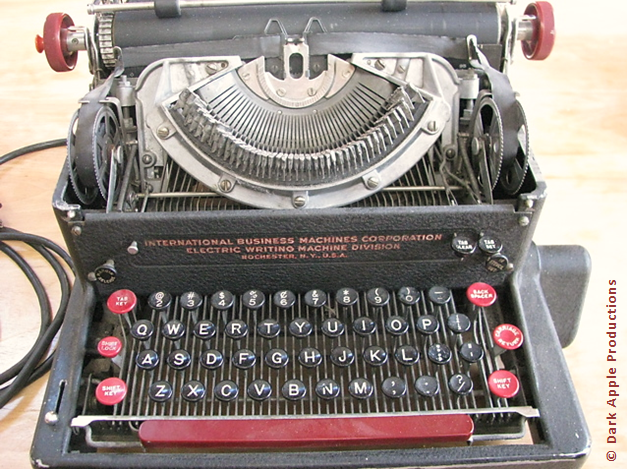 The second machine I found at a local antiques store while on the hunt with my mother for a small writing desk for her apartment.  It was the only typewriter in the place.  I immediately called Architect for a confabulation.  My phone is old school -- no camera -- so we did it the fun way:

Me:  Are you near The Internets?
Architect: Give me 30 seconds . . . okay, shoot.
Me:  Search Remington Rand Model Seventeen on Google Images.
Architect:  (after a few moments) Oh yeah, this looks like a possible!

Dear Reader, it was not only possible, it was cheap ($35)!  It was also ugly, but in a nice way; the way we wanted it to look: unusual and a tad otherworldly. 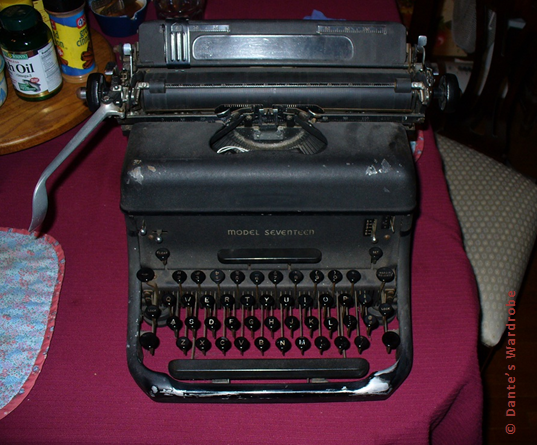 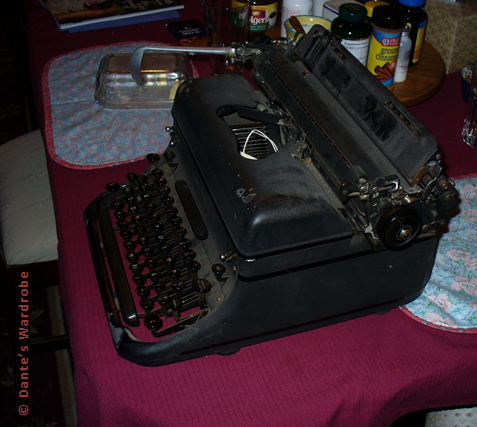 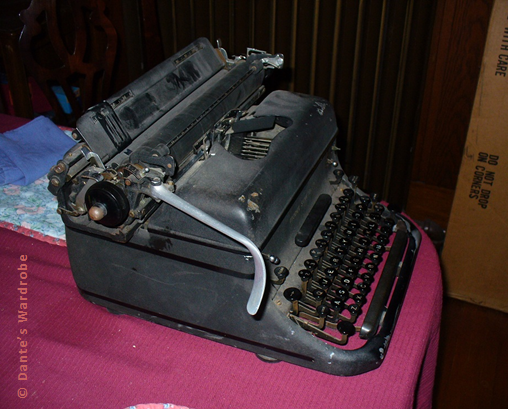 I've suggested to Architect that he might -- in the interest of a wizardly theater ambience -- want to change the look completely by painting the Rem and, perhaps, add some decorative decals or handpainted designs. Actually, I believe the words I used were tarted up. (I referred him to the Flickrstream of mpclemens of Clickthing who has also been known to dunk-n-wash old typewriters in soapy water!** The Clemens is an intrepid soul!)  This has led to an interesting philosophical and art-making discussion on the nature of old things and whether/if/how they should be altered and to what degree.

*  I failed to note where I found this image and have been unable to re-find it.  It it is yours or you know from whence it came, please let me know.

** Please note, the 1957 article to which this link connects should be read in tandem with a Letter to the Editor, published here in a later issue of the magazine, which vehemently disagrees with this cleaning approach. Mr. Clemens has reported success and no problems with the method.  Note, while he may be intrepid, Mr. Clemens is also meticulous and careful in his work.