Packages for an Imagined Event: Item 8 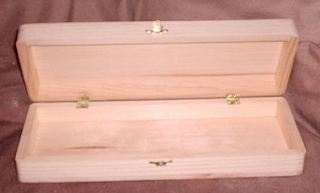 Image source
(Pop's Wood Shop)
Some of the postal gift packages from this Summer's Wizarding Event took a bit more time to pull together.  Most often it was a matter of finding/making the proper container for the items. Package 8 came together slowly, but in the end turned out to be one of the tenderest gifts received.

I had a wooden pencil box, similar to the one shown above.  What would go into it was not certain - but I began preparing the box for whatever might be found.  First I spray painted its exterior a bright blue (the paint was leftover from the "magical House keys" I'd made). 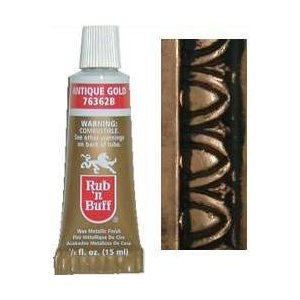 Image from the Amazon product page.
(I bought it locally, though, at a hobby shop.)
Then I used Antique Gold Rub-n-Buff to give the box a fancily worn look.  Using a brush I painted the interior of the box with metallic green acrylic and edged the opening with more of the antique gold.

There was one item in the "perfect packages" stash that I was especially anxious to include in one of the children's boxes.  It was a blown glass Christmas ornament I'd received some 25 years ago.  The inner glass was purple - so, of course, I imagined it to be made of amethyst!

I had some faux, embossed leather of a similar purple shade; I used it to wrap the crystal.  But the package seemed incomplete somehow.  I set it aside for several days, wondering what would make it a proper gift.

Then I found it - hidden at the bottom of one of my stash boxes: an old, long leather packet containing a tuning fork.

This image is not the fork I found (I forgot to photograph it.).  It was like this but the tines were about 2 inches longer and the entire piece was a little tarnished, as if it had been long used.  The leather case was particularly beat up.  I decorated it with a tassel.

The story of this collection of items quickly came together.  It was old and well-used; it was clearly magical; and its owner was near her time and wanted to pass it on to someone special. 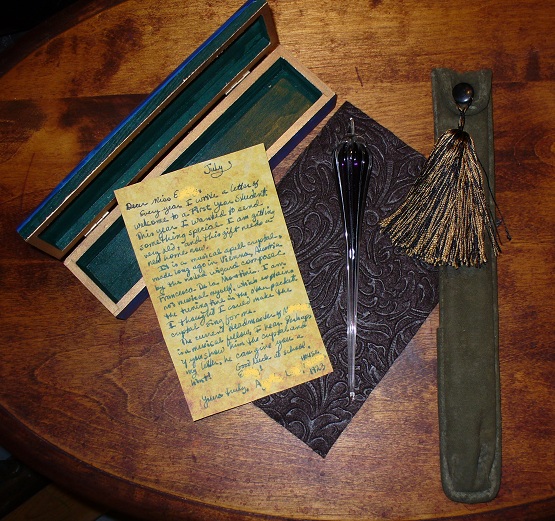 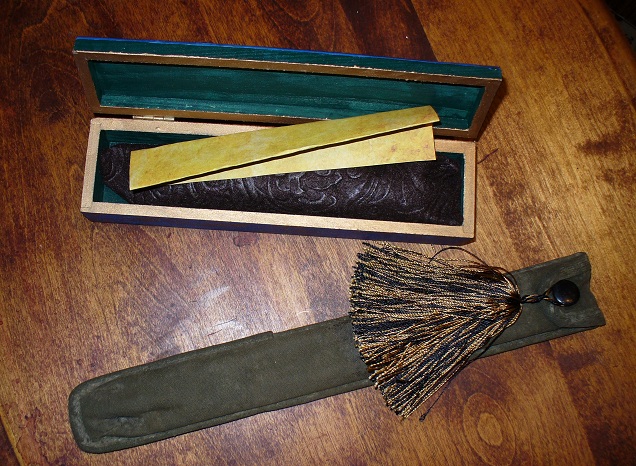 I wrote the letter by hand, using an Art Deco-era Esterbrook Dip-less Pen and Higgins Eternally Black ink.  The parchment paper I made by printing a parchment graphic image on both sides of sheet of off-white card stock paper. The image was one I'd found via Google Images (under the search phrase old parchment paper). I aged the color of paper a bit by tweaking its color and contrast using the Picture Tools function of Microsoft Word. 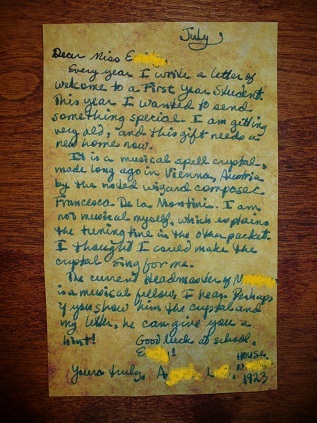 Text of the letter:

Every year I write a letter of welcome to a First Year Student.  This year I wanted to send something special.  I am getting very old, and this gift needs a new home now.

It is a musical spell crystal, made long ago in Vienna Austria by the noted wizard composer Francesca De la Montini.  I am not musical myself, which explains the tuning tine in the other packet.  I thought I could make the crystal sing for me.

The current Headmaster of N----- is a musical fellow, I hear.  Perhaps if you show him the crystal and my letter, he can give you a hint.

I wrapped the blue box and the tuning fork packet separately, bound them together with raffia cord, and attached a tag marked fragile.  There were several real stamps from Italy which I took from my mail art folder.  Various cancellation stamps added to the effect. 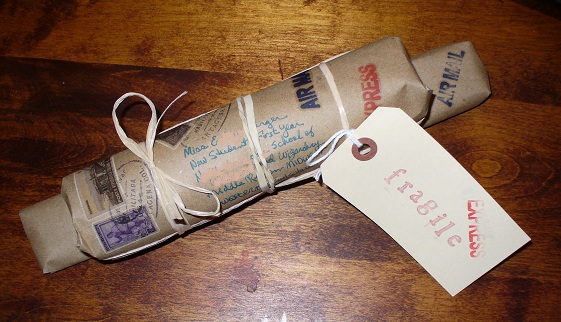 On the day of the event, I was the actor playing the delivery person (a Pony Express rider for the Western Region of the Owl Post).  I handed the package to the young lady and said with affected sternness, "Now be careful with this, Missy.  It's marked fragile and Athena [my horse!] I took extra care to get it to you."  But as my actor's duties had me busy with the rest of the deliveries, I did not get to see the young lady open it.  I only noted in passing that she was quite shy and accepted her mail almost uncertainly.

Later that evening, during the end-of-day party (now dressed as my Editor Persona), I happened to catch a very sweet exchange between the lass and the actor playing our Headmaster.  She had taken the letter writer's suggestion to heart and asked him to help make the spell crystal sing. 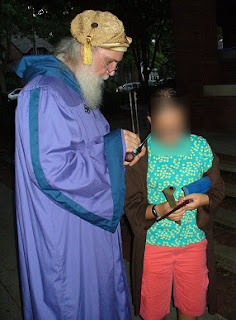 The actor is a part time musician.  The charm of it for me is that HE did not know what was in the letter!  So he had to come up with something while staying in character and he did.  He struck the tuning fork and placed it on the crystal - and very kindly instructed the girl to put her ear close so she could hear the sound.  They tried it several times so she'd know the steps.  Then the girl thanked him.  Later I saw her seated on a boulder away from the bustle of the party - striking the fork and gently placing it on the crystal up next to her ear over and over. 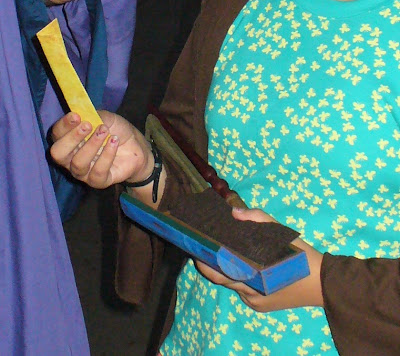 The posts describing all the imaginary postal packages can be found grouped here under the tag faux package.
Posted by J.A. at 4:00 AM