Worlds of Our Own, Part 1 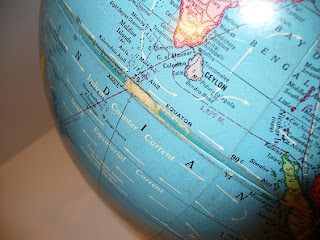 My always fun and creative nephews and I have been on the hunt for a new project.  (This past summer they designed their second dinner party for family members: a menu of 4 courses, all the cooking, and table decorations including menus typed up on a manual typewriter and hand illustrated!)  So when I saw the following image some months back, we knew we had something. 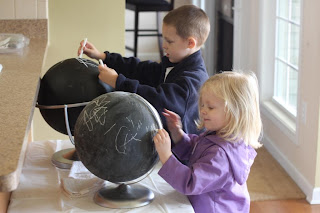 Image source
We would make our own planets!!
Getting the project off the ground took some doing.  Who knew that just finding some old globes would be a project in itself?  Our local Goodwill shops had nothing.  Plus I was thinking they'd be relatively cheap.  No way, Ray!  Instead, I ended up bidding on numerous eBay globes.  I thought I'd struck gold with one, only to find the seller was less than accurate in the description.  The globe didn't spin and its surface was all torn up.  Fortunately, I found a couple more and they arrived in reasonably good condition. 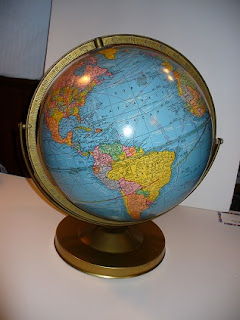 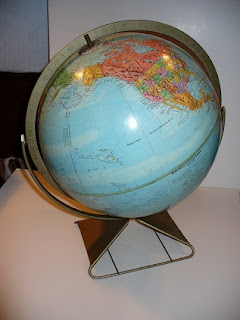 A local Craigslist ad filled out our needed globular number and then some. 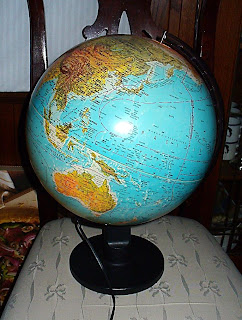 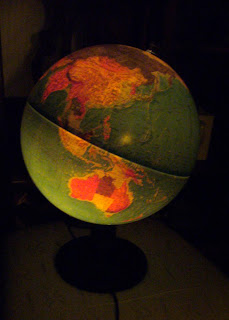 I ended up with SIX globes!  Fortunately, my brother Architect and his daughter Hoja are thinking of a redux of the Summer Wizarding Event.  They are thinking that the Headmaster's Office set needs more by way of excellent, wizardy occupational study stuff  -- such as clocks and globes and such.  So he's offered to buy up my extra Earths. 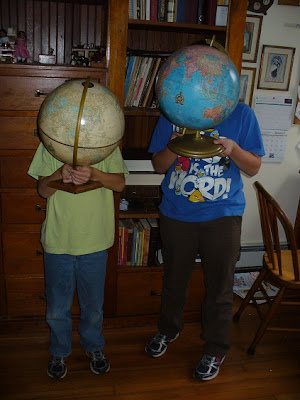 Last weekend, the neffers and I began our Planetary Adventures.  Fortunately for Galactic Peace, each had a liking for a different globe; so I didn't have to set up a rock-paper-scissors contest to work out which globe went to which boy! 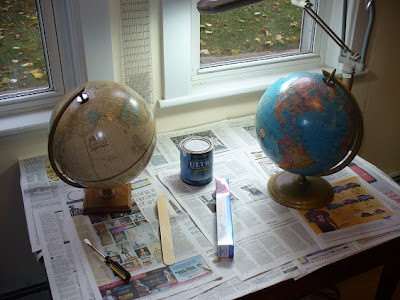 We set out materials for Round 1 - which would involve covering the not-to-be-painted parts with aluminum foil and then applying a coat of flat latex acrylic paint as the primer coat. 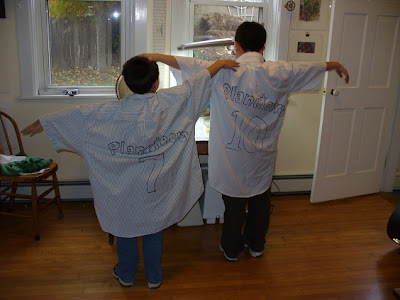 But first, knowing things were likely to get messy, we made up some painters' smocks.  My Beloved Spousal Unit and I both had some dress shirts destined for the rag bin - these were donated to the Great Chalkboard Planet Adventure.  I had the boys try them on and then cut the sleeves to a workable length.  Then I labeled them with the name of our creative "team" -- Planeteers -- and added their respective uniform numbers (their ages). Their Mom also had them change into shorts so their good jeans wouldn't get paint on them.
The painting commenced. We worked on the table first and then made things more comfortable by shifting to the floor. 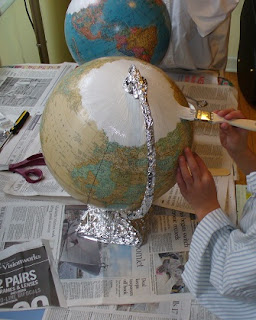 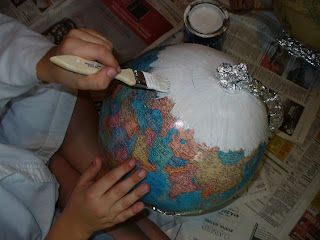 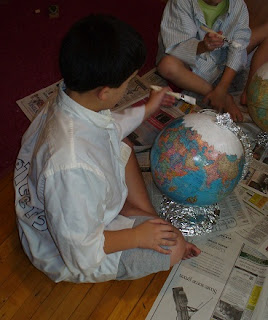 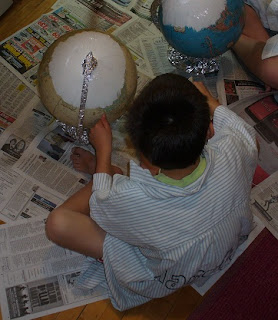 After a good thirty minutes, the first coat was complete and we set them aside to dry. 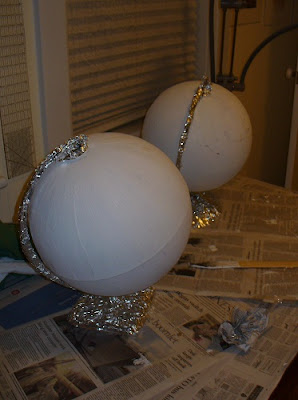 We finished our afternoon together enjoying a video and a book I'd brought along.  Shaun Tan, an Australian artist, is someone I introduced the boys to earlier this year when I read them Tan's poignant and fantastically illustrated graphic novel The Arrival. 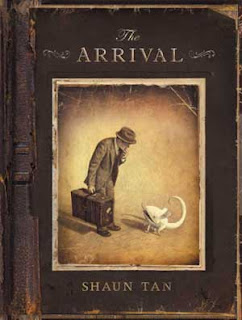 See this earlier post of mine about this book and Mr. Tan.
This time, we looked at The Lost Thing. We read the book first and then looked at the 15 minute film.  They liked it a lot and we found ourselves looking through all the DVDs extras that showed how the various characters were rendered and the different music chosen. 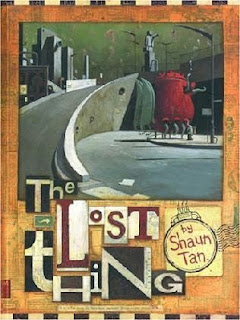 Mr. Tan won an Oscar for this film. You can find more info on it (and how to get a copy) at this page on his website.  NOTE:  The DVD may not play on older DVD players as it has regional limitations.  We had no problem playing it on the boy's Mom's laptop - but it would look so much better on a larger screen.  The animation and illustrations are just fantastic.
Posted by J.A. at 4:03 AM