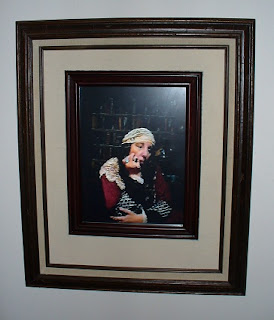 Still photo of me in my Portrait Wizard Character role.
(The 15-minute looped video ran continuously through the day.)
This past Saturday saw the successful production of the Wizarding Event.  Up to an hour before the arrival of the "New Students" the cast and crew were still hurrying about, setting up the classroom sets, the Great Dining Hall, and making sure the electronics for the three moving portraits (one for a live actor) were working.
At the last moment I was asked to fill in for the lunchtime postal carrier, so in addition to arriving for the end-of-day party in my character as the editor of the newspaper the students monthly over the last 5 months (and which I'd mostly authored), I invented a Pony Express Carrier persona. An observant student would have noticed that a single actor was playing three roles (including the portrait wizard above).  But to my amazement, they never realized! It was very hard not to break character and laugh the third time I showed up. 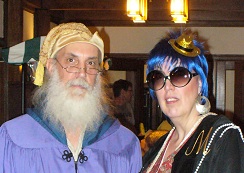 In my Editor role, with my brother Architect as the Headmaster.
Dear Readers, I am not a person easily missed.  I am several inches over 6 feet tall!  Yet via the wonders of 3 different wigs in 3 different colors; 2 different styles of glasses; 3 very different costumes; 3 different sets of body language and, in the case of the Pony Express and Editor personas, 2 very different speech cadences and accents, no one appeared to be the wiser.
I wasn't present for the main portion of the event, so I will need to post pics of the classes and other activities later when I get them from our photographers (who played reporters for the local wizarding newspaper!).  But here are some that I shot before and during the final party.
One major set was the combined store and post office.  Here is the schematic I made during the collaborative design phase. 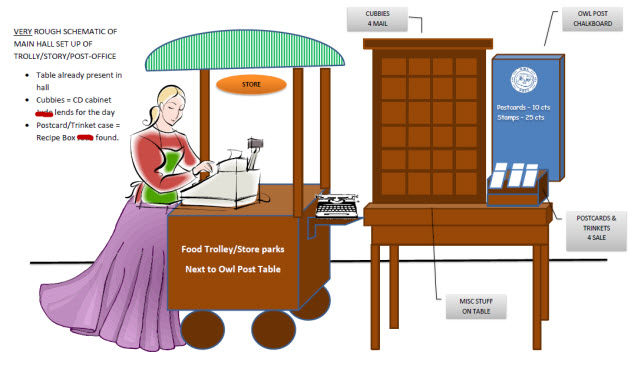 Architect created the Trolley using a 1970s-era neonatal mobile intensive care isolette (a self-contained incubator unit) as its base.  A table already present in the hallway of the venue building served as the Owl Post Office.  A CD cabinet provided the P.O.'s "cubbies" and served as the sale area for the sheets of postage stamps, aerograms, brochures, and freebie stamp boxes.  The postcard cabinet made from a rummage sale recipes box/shelf held a display of 7 different postcards designed for the event. 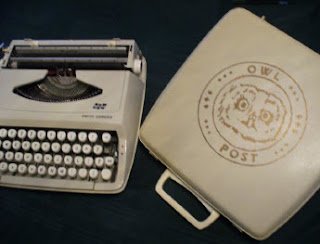 The Owl Post Typewriter, which we'd thought would work sitting on the Trolley's pull-out counter, wound up on the table - making it more accessible for the mostly small-sized students.  And the chalkboard was hung on a conveniently present nail, opposite from the planned location. (We were not allowed to pound in nails to hang things, which proved to be a bit of a challenge.) 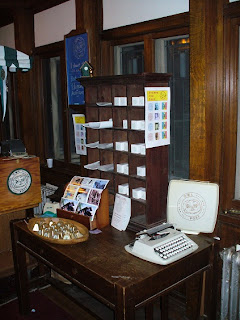 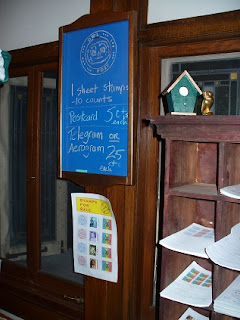 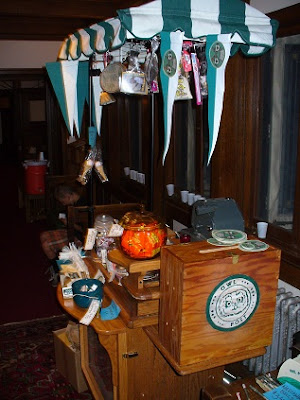 Trolley Cart/Store set located next to the Owl Post Office
(with the P.O. mail dropbox on a slide-out counter).
﻿The Trolley proved to be a major attraction for the kids.  Though a little difficult to see in the above pic, there were numerous large jars of candy, school pennants, glow-bracelets, bags of hard candy, and other knick-knacks. A big hit were the chocolate frogs made for us by a local chocolate maker. (We thanked her by including her - in costume - as one of the wizards on the the "trading cards" that came with the frogs. Below, as an example, is the card for my Portrait Wizard Character.) 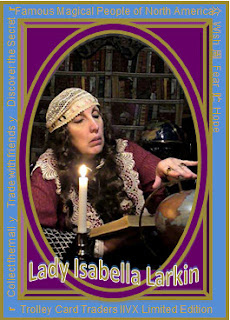 Students were required to bring $10 - which we converted into the wizardly currency of the day (actually a combination of oddly sized foreign coins). 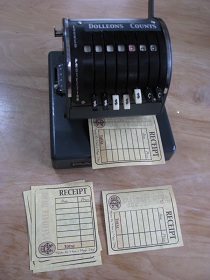 Receipts were provided for each purchase using an old,
hand-operated machine with receipts designed with Photoshop. 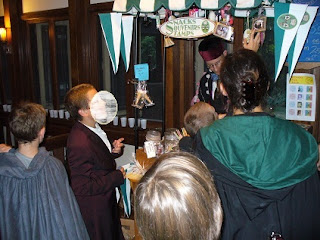 Trolley Cart/Store (and very eager students!)
Another key set was the Headmaster's Office.  The building venue was an early 20th-century Craftsman-Style mansion very kindly donated for the day's event.  A study-like room off the original living room was decorated to reflect the Headmaster's eclectic interests. 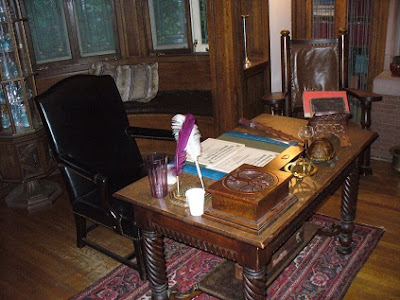 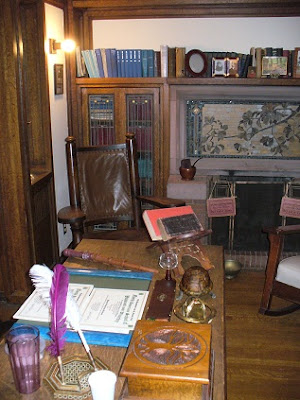 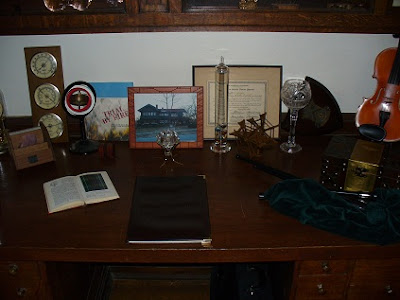 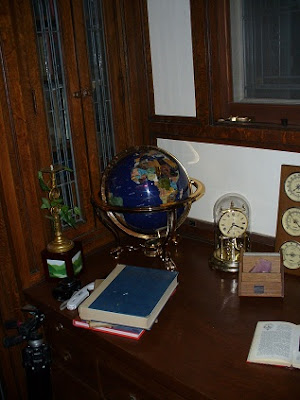 It even had a fireplace!  But to keep students from playfully trying to use the "Floo Network" described in Rowling's books, a whimsical Out-of-Order sign was posted (and on all the fireplaces on the two floors we were using). 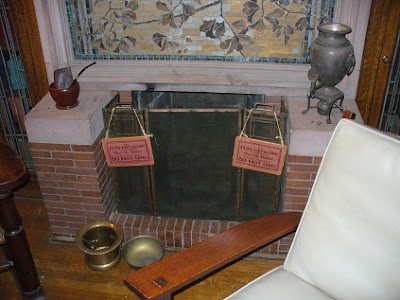 Here are a few miscellaneous images I was able to catch later in the day. 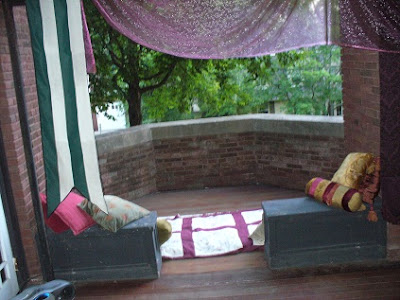 One of the outside classrooms. 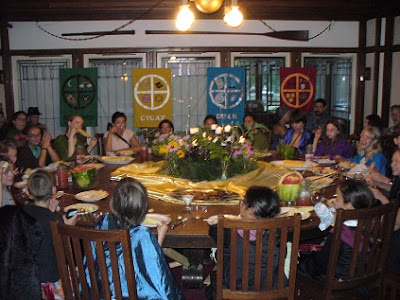 The "Grand Dining Hall" with its House Banners and large floral centerpiece.
The Headmaster instructing one of the students on the use of the "spell crystal" and tuning fork she'd received in her Owl Post package. 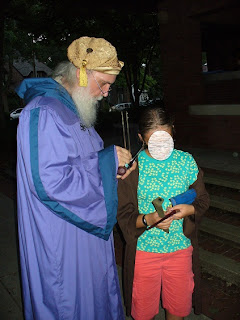 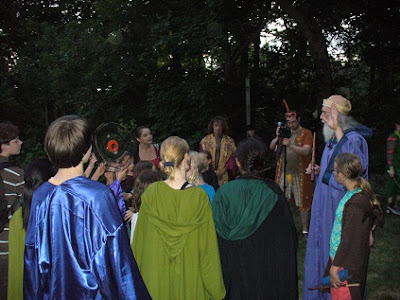 The Headmaster describing an imminent class field trip to Egypt via the PortKey created by students earlier (in a class taught by a local art welder).
As I receive more pics from our media crew, I will post them here.  In the meantime, In the coming few weeks I will also report on the props and postal items I created for the day.
Posted by J.A. at 8:44 AM