New Additions to My Personal Typosphere Image from mpclemens Flickrstream
The end of 2011 bid farewell to two typewriters and welcomed four. The first to leave was a 1940s era Smith Corona Clipper. 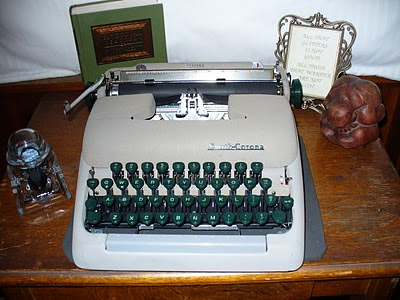 I had christened it The Detective after something I imagined Philip Marlowe, Raymond Chandler's fictional detective, might use. The Detective was on loan, however, the kind gift of Deek at TypeClack, who sent it for my young nephews.  (I wrote about that memorable afternoon here.) 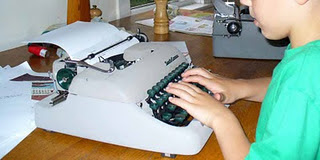 As many of us who collect these lovely beasties know, sending a typewriter through the post can be a nerve wracking experience.  Though made of metal (the earlier ones, at least) the machinery within moves and can be broken or entirely ruined by too-rough handling and/or poor packaging.  I was especially keen to return Deek's Clipper back to him in good condition.  Fortunately, I had the box he'd originally used to send a typer to me last year.  I secured the carriage, padded the basket with bubble wrap, and added a little padding around the machine inside its case.  Then I filled the box snugly with packing peanuts.   And then crossed my fingers!
Operating on the assumption that it is always helpful to entertain and compliment Post People of all stripes (U.S. Mail, UPS, DHL, etc.), I made the labels for Deek's package fun and colorful.  My hope is that a happy PostPerson is a careful PostPerson! 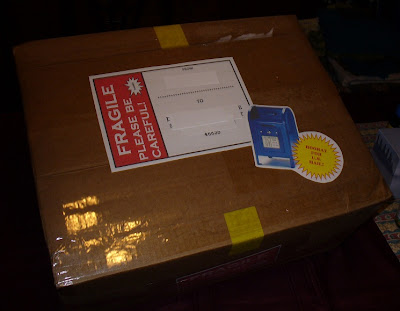 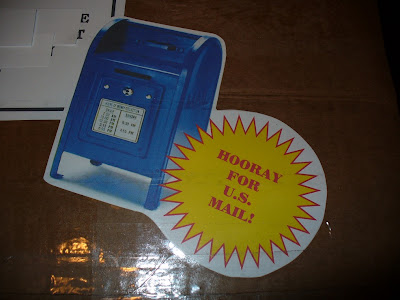 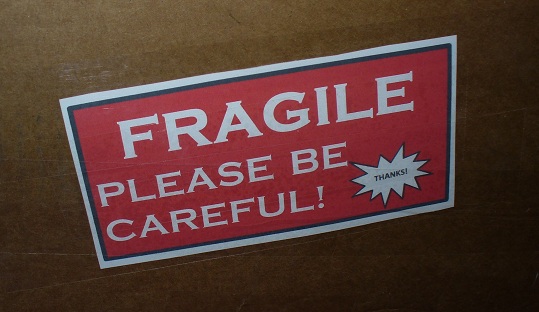 [UPDATE:  It arrived safe and sound! WooHoo! Thanks USPS!]
The second machine to leave, was an Xmas gift to my nephew, Driver.  I asked him if he'd be interested in having a 1960s era typer.  He said he thought it would be nice to display in his apartment.  "Display only?" said I, "Then you wouldn't mind one of my broken machines?" He hastily replied "Well, perhaps I might be encouraged to write letters again if I had a working one!" 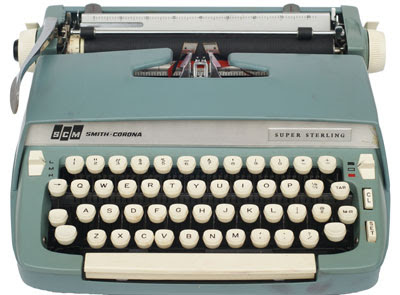 Image source
So off went a Smith Corona Super Sterling - discovered at Goodwill only a few months ago and so new I'd never taken its portrait.  But it looked like the one above.  I included a printout of the SC Portables Manual (kindly posted by Olivander at his gorgeous website, Machines of Loving Grace).
The machines that I acquired were all local.  After a run of no luck at various Goodwill and other second hand shops, I seem to get on roll!  The first machine was a found at an Estate Sale . . . those dangerously, delightful, potentially awesome yet often disappointing events.  (My Beloved Spousal Unit and I will occasionally drive around for the express purpose of locating estate sale signs.  For a cheap date, you can't have much more fun!)
This particular sale was in a ranch house and I thought I'd be unlikely to find anything (I like really old stuff with stories attached, if possible!).  It was the last day of the sale and things were fairly picked over.  And then, what to my wondering eyes should appear . . . over in the corner half hidden by some old newspapers . . . a Smith Corona Silent. 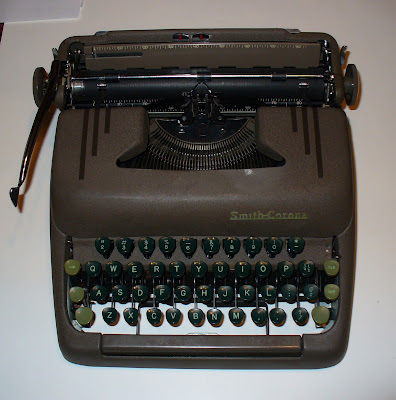 I was a little uncertain about its condition as a number of the keys had a powdery bloom on them. (I have allergies, so I hesitated testing the keys and other mechanicals.)  But I had some Kleenex and covered the powder and tried it out.  Other than that old, smokey attic smell, all seemed in good shape. 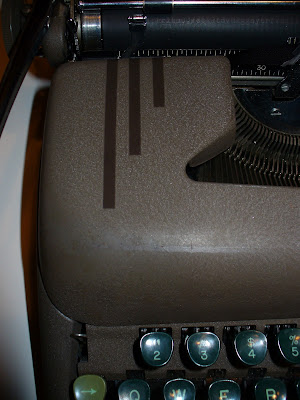 It doesn't look too much different from Deek's Clipper, but it has something I've long desired on a machine: Racing Stripes!! Plus it types pica, which I tend to prefer for my letter writing.
The second machine was $4.99 Goodwill find in almost pristine condition.  And there seemed to be a bit of Typosphere Karma at play:  it was another SC Super Sterling!  This one had a nice dark khaki color. 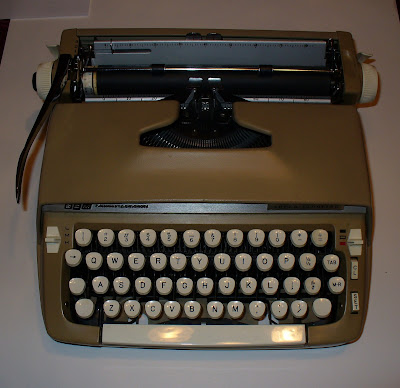 It hasn't been my plan to acquire a line of Smith Corona typewriters (I prefer Royals), but a machine in good condition for less than $5 is hard to pass by!  Plus this one had those flattish and nicely-sized keys I find so easy to use. 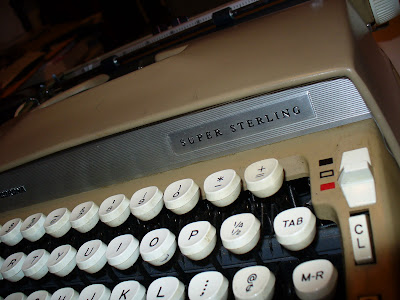 The third machine was one I'd never seen before: an 1970s era Underwood 378.  Another Goodwill find (for $12.99 this time), it wasn't looking too good.  The cover of the case was a shelf over and the ribbon was pulled out and lying all over the machine, which itself was crammed under an old scanner. I duly tested the keys and other mechanisms and found that the cover still attached correctly.
Unlike the very pretty picture at Richard Messenger's OzTypewriter blog (below),

the exterior of my new machine had seen much, much better days.  The case was beat up and scratched and the color, described by some typewriter aficionados as a lovely cornflower blue, was somewhat faded. 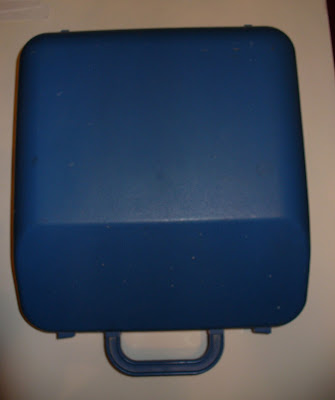 The interior, though in need of some cleaning, looked good. 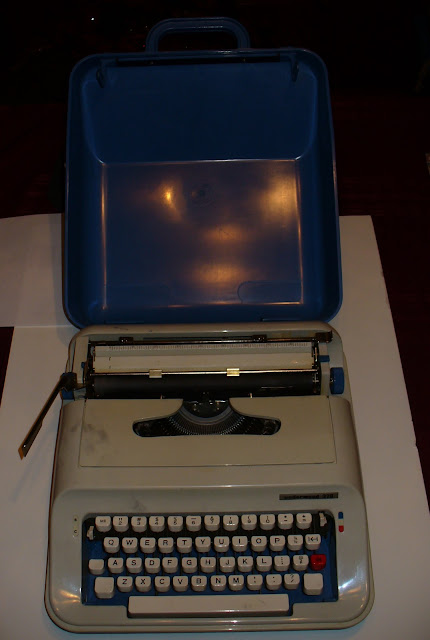 And the funky, pillow-shaped keys had a nice snappy and quick feel. 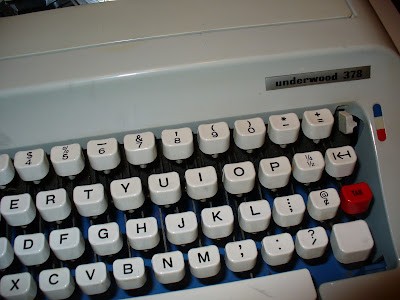 This machine goes by another name: Olivetti Lettera 92.  That odd story is relayed (and well illustrated) by Mr. Messenger here.  I hope it to get it up and running in the coming weeks.
My last machine seems to prove a key tenet of the Typosphere: Be nice in the Typosphere, and good things happen! I'd posted to the Portable Typewriters Forum (A Yahoo! group) asking if anyone had suggestions about what typers would be good for some young, rambunctious boys.  Deek sent me a lovely Clipper before I even knew who Deek was!  (We've since become typewriting letter correspondents.)
So it seems only fitting that my latest acquisition is another Clipper from about the same era.  I had originally helped my sister Cee find it on eBay last year.  I had her over for a test-typing day: set all my then machines out on our dining room table so she could see which one she liked most.  The old Clipper was it - so we went a-hunting.  The eBay seller was a total gentleman and answered our emailed questions carefully and in detail.  He also packaged the machine extremely well. 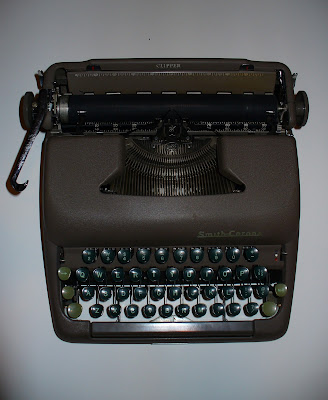 I offered to buy it back from Cee after sending its predecessor back home.  This one lacks a paper bail - which seems unusual but I don't see anyplace for one to attach, so I guess its normal.  And the typeface is a very wee, but very clear elite with the funny squished question mark that I find so amusing. 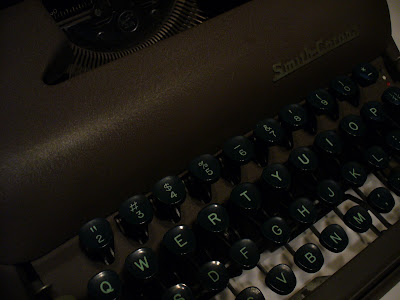 So now a new year begins and I tell myself, no more typewriters.  But then again,  I just saw some very cool pictures of the spiffy-looking and highly compact, 1940s Smith Corona Skywriter. Want! 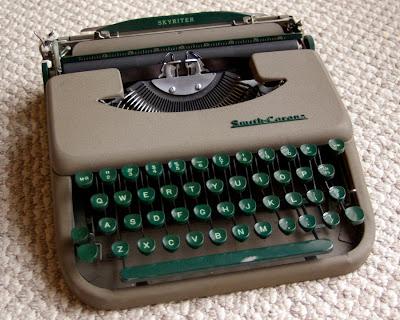 Image source: Typeclack
Ohhhhh, it is a slippery slope we Typospherians navigate.
Posted by Judith at 3:34 AM