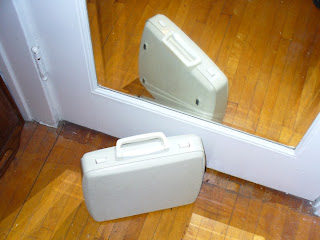 Back in April I posted about the special typewriter I was able to provide for the Summer Wizarding Event.  Our hope was that the kids would use it to type notes at our special Post Office.  I found a typewriter at a nearby Salvation Army Resale Store; a perfect little machine with a nice, shell-like cover. 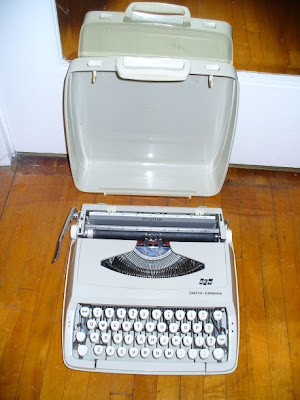 We called our postal service the Owl Post, operating on the creative notion that while North America was too large a geographic space for owls to do the actual deliveries we wanted the service to still echo the Rowling idea of owls.  So we kept the name.

I designed a logo for our Post Office using a free clip art image of a Snowy Owl I found online.  The image was of an entire owl so I modified it (using a grab it/edit it software called Snag-It), using just the face which would then fit in the center of a circle.  The idea was that the logo would also serve as our postal cancellation mark. 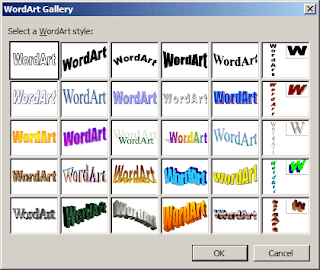 Image source
The logo itself I made using Microsoft Word (of all things!).  I put the owl image square and center on the page; drew two concentric circles around it; adjusted their width/weight to that of the lines in the graphic; and then added the text and the small circle and diamond shapes, the paths of which I curved to fit the circle using Word's Text Art feature.

I also ordered rubber stamps made with the design in two sizes: one was 2.5 inches around and used to decorate the newspaper and letters we sent out pre-event; the second was a 1.5 inch circle set along side cancellation bars and used to "cancel" the letters the students received on the day itself. 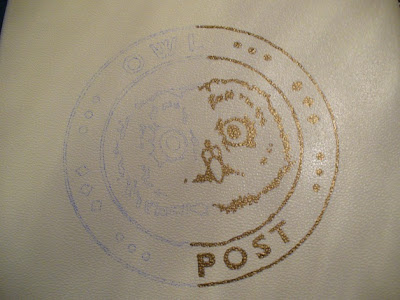 First, to remove any hand oils and old, ingrained dusties, I cleaned the surface of the cover with rubbing alcohol.  Then, using tracing paper, I copied the logo design onto the cover of the typewriter.  Finally, with a very fine camel-hair brush, I painted it using a "dark bronze" metallic acrylic paint.  Once dry, I sealed the surface of the entire cover with a matte-finish acrylic spray. 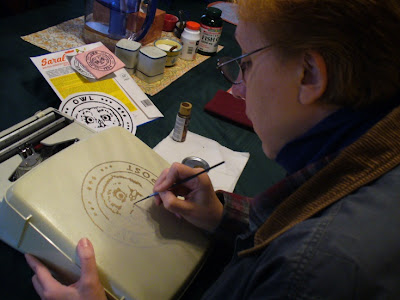 (Yes, I am wearing a turtle neck shirt, a wool shirt, and a jacket.
Spring in Wisconsin this year was very cold and damp!)
The end result was quite satisfactory and added some real old-fashioned panache to the Post Office Set. 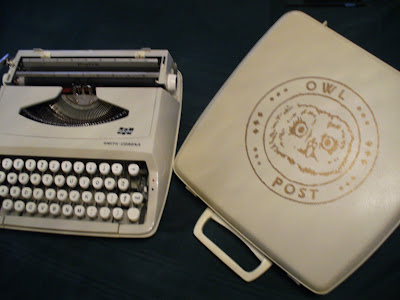 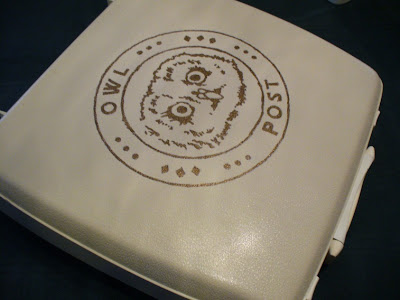 I'd like to say our wizarding students were dazzled by it but, frankly, they didn't quite know what to make of it!  They were all too young to know what it was or how to use it.  If the event is run again next year, there is some thinking that the Post Office might have a separate actor showing off the wares. 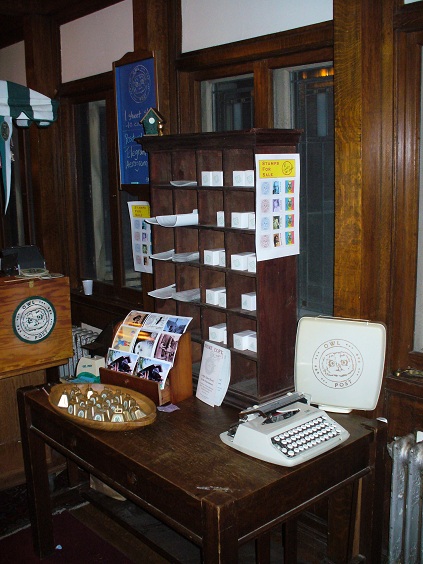 The Wizard's Typewriter, ready for action.
Posted by J.A. at 4:04 AM