Packages for an Imagined Event: Item 1 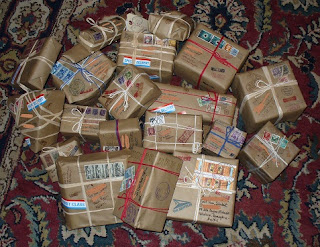 Back in April I posted a request for odd objects to be used as items for the kids who attended this Summer's Wizarding Event.  I combined the things I received with various cool "stashes of junque" donated by event crew and my own collection of oddments and baubles.

The purpose of this magpie behavior was to be able to create unusual and wizardly-like packages for our student attendees to receive via Owl Post on event day.
Each package had to achieve the following goals:
Here is the first package.  (Throughout this run of posts on the faux packages, I will have covered the name of the students, event characters, and any other identifying information about the event itself at the request of the main planners (who are working to copyright aspects of the event). 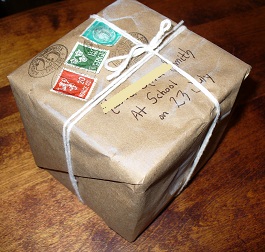 Package 1
This item was something donated by my father-in-law, Professor Science.  It was a mathematical toy he picked up in England some 30+ years ago.  The thing itself was a metal, bendable, springy shape called The Octyflex.  It came with a xeroxed sheet of information and illustrations.  With a little computer magic, it became The Octyflexor Spellbinder! 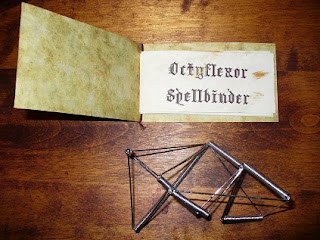 The first thing I did was scan the xeroxed page of illustrations. Then I created an individual graphic of each of the shapes and tinted each a dark red.  Using Microsoft Word, I made a booklet of pages, with two of the illustrations per page. I printed the booklet on an ivory-colored parchment paper. 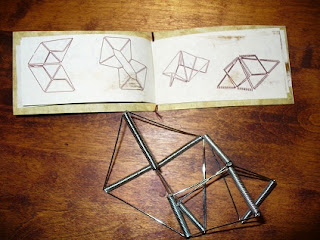 To make the cover for the booklet, I searched on Google Images using the phrase old book cover. I picked one that looked nicely antique and further aged it by darkening it using the Picture Tools function in Word.  The eye-effect of the center lozenge shape was just a matter or adding an oval shape and a mini-version of one of the octyflex illustrations. The inside cover parchment-look was achieved by printing a parchment graphic on the opposite side of the page. The whole cover was printed on heavy cardstock.
Finally, I gave it a little magical glamor by gently brushing a gold-inked rubber stamp pad over the pages and covers. The pages were "bound" by a triple strand of dark red embroidery thread that I tied around the center along the fold of the booklet. 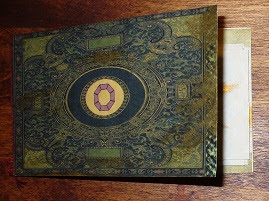 The idea for the letter for this package was that the spellbinder was the invention of a medieval-era magician and the "letter" was his instructions along with the injunction for the user to do no evil with his creation.
I had images of parchment (located by searching Google Images with the phrase old parchment paper).  Again, using the Picture Tools function of Word, I darkened the image slightly and modified its contrast so that the page looked a little dirty. I printed the image on each side of a single sheet of off-white cardstock (so that the letter would look like a piece of real parchment.)
While that dried, I typed the text.  The first 2 paragraphs were the text of the xeroxed instruction sheet, edited slightly to sound like notes, not game instructions.  The last two paragraphs were ostensibly written by the magician.  I added a touch of Leonardo Da Vinci by using one of the illustration graphics, modified to look like it had been drawn in a rusty-colored chalk.  The idea was that the magician was "proving" that this was his invention by including an original sketch.
After printing the text onto the parchment paper, I let it dry, rubbed a little gold ink onto its surface, tore the edges to roughen them up a bit, and then scrunched it all up to make it look and feel like a worn piece of an ancient scroll. 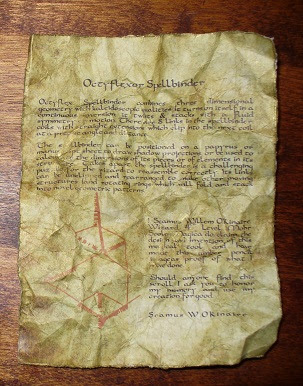 Text of the last two paragraphs:
I, Seamus Willem O'Kinaire, Wizard 4th Level, Mohr Scola Magica do claim the design and invention of this magical tool and have made this umber pencil image as proof of what I have done.
Should anyone find this scroll, I ask you to honor my memory and use my creation for good. 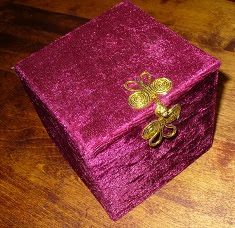 The octyflex spellbinder, letter, and booklet went into this box - something I found at Goodwill for all of $1.  In removing the price sticker from the bottom, part of the paper was torn off as well.  So I covered it with a stamped image from my collection of rubber art stamps that I texturized using embossing powder and a heat gun. 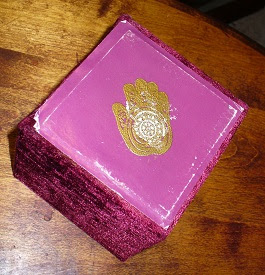 And here (below)  is how Package 1 looked before I wrapped it up for posting.  The entire box was approximately 4.5 x 4.5 inches square. 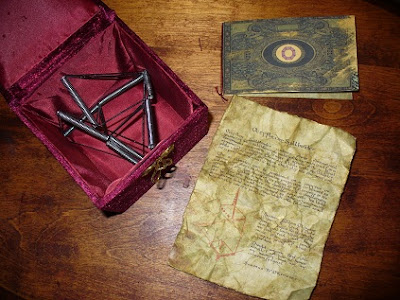