The Spaces of Others

Where we live, how we make our spaces our own is as much a creative "statement" as it is a personal one.  We can all easily recall scoping out the bookshelves of friends, or those of the hosts for a party, or of a professor as we wait for her office hours to commence.  Others' space is The Other made concrete.
One can visit Other Spaces via certain blogs, Internet-reported projects, or just taking a long walk in a new neighborhood.  Here are a few I've come across lately:
David Carr Smith
David Carr Smith has created a web book titled: Improvised Architecture in Amsterdam: Industrial Squats and Collectives.   He describes the work as a "visual-conceptual-experiential documentation of four occupied industrial sites in central Amsterdam, researched and recorded between 1990 and 1997 and between 2006 and 2008." 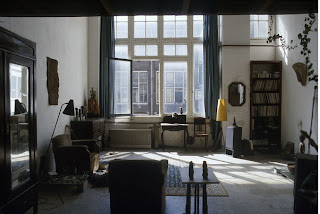 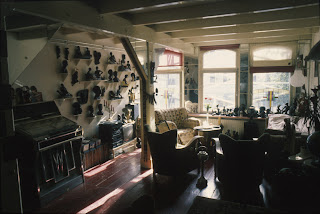 Images are copyrighted by David Carr Smith
What is impressive is his respect for the Other Space.  In taking his photos he says "Photo subjects are never interfered with: care is taken not to disturb the arrangements/patterns of objects from large to minute; lighting is as found. . . ."
Sweet Juniper!
Sweet Juniper! is a blog written by Jim Griffioen, one-time lawyer now living and, along with his wife -- a practicing lawyer -- raising their two kids in Detroit; or as he puts it "the most dangerous city in America."  Griffioen is a wonderful writer with a keen eye and wit.  Now and then on his blog he writes about and shows well-composed pics of abandoned buildings in his city.  He calls them feral houses.  The stories these achingly alone places speak . . . 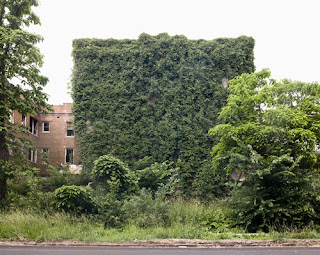 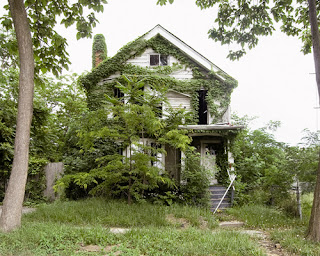 Images are copyrighted by James Griffioen
Obelia Medusa
Obelia medusa's dollhouse re-creation of Bag End, J.R.R. Tolkien's home for Bilbo Baggins, the protagonist of The Hobbit.  Besides the remarkable craftsmanship, what's so neat about her work is trying to imagine how she got those perfect camera angles; some at hobbit level. 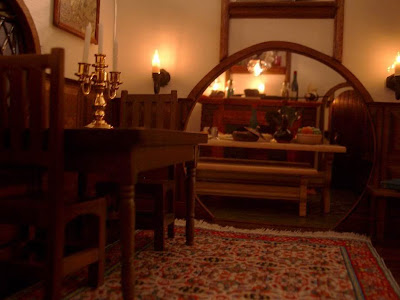 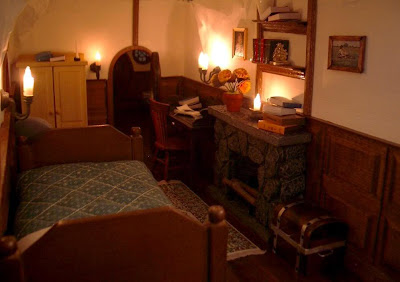 See the many-rest of her images here.
The Steampunk Home
Sara Brumfield keeps a blog named The Steampunk Home.  In it she presents the images, places, and objects that rock her creative boat.  Every now and then she'll post a studio tour of an artist or designer or friend.  Here are a few pics from two of the tours. 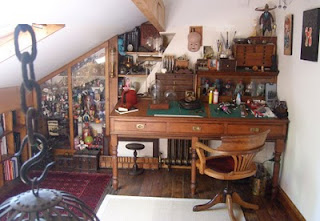 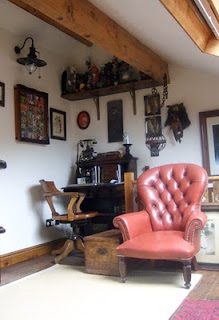 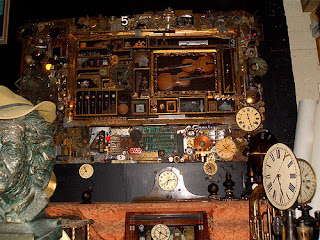 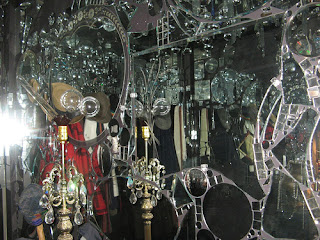 Roger Wood's studio
Wood is a wildly inventive and uber-craftman, a maker of inventive clocks.
See other studio images at his website here.
The Hermitage
Artist Rima Staines' work is focused, makerly, and deeply intuitive. She doesn't simply have a blog, rather, she creates a window into her universe and her imagination.  Her latest entry takes us on a walk in the early morning; the spider webs are gorgeous! 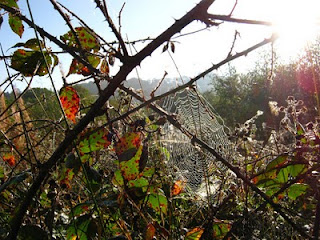 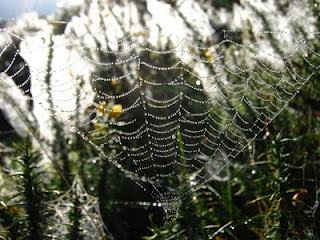