The Kindness of Strangers and the Laughter of Little Boys 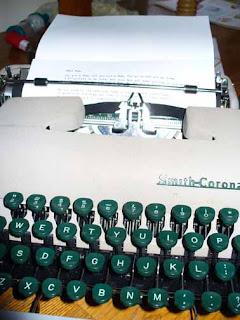 In one of my first posts, I described the delight of reacquiring a manual typewriter. Since then I have enjoyed typing letters to various pen friends.  Recently, I sent letters to my nephews which included a mention of how I was writing the notes on this machine called a typewriter. Their mother told me later that they had no idea what I was referring to!  So I conceived of a plan to introduce them to the wonderfulness of the typosphere.
But what machine to use?  As it happens I participate in an online group called The Portable Typewriter Forum.  I posted a general inquiry: what machine did they think would be good for some rambunctious man-children to learn on?  One gentleman with young children of his own offered me a Smith-Corona Clipper free for the shipping!  The deal was sealed - and I sent him some jars of homemade jam along with the check!
Wish he could have been a fly on the wall when I brought out the typewriters one evening recently! Actually, I made the boys bring them out (the Clipper and a Royal Quiet Deluxe). They were SO wiggly anxious and excited to see what I was talking about.
They came out to the car and each carried a case into the house. (I wanted them to see  how heavy they were even though people called them 'portables.') Then I had them open them up and asked if they could figure out how to get them out of their cases. With a few hints they found the release mechanisms. The Clipper proved to be a bit of a challenge with the release inside the lower edge of the 'keyboard' area. 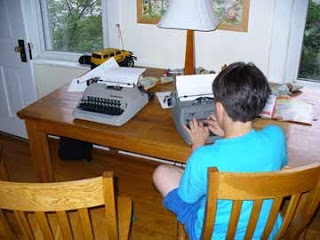 Then we set them up on their dining room table and compared them. More wiggliness ensued - they wanted to use them NOW but had no idea how they worked. "Where's the plug?" "What button erases stuff?" etc. When I said you had to roll in the paper (using two sheets to protect the platen), they expected the paper to roll in automatically and just sat looking at me holding the paper ready to go in. It took them awhile to get the idea that THEY had to make all the parts move. Boy1 ended up using the Quiet Deluxe while Boy2 and I worked the Clipper.
Most exciting finds:
After the initial introduction, Boy1 asked "Can I write a story now?" which he proceeded to do, two finger style for the rest of the evening, occasionally coming over to where Boy2 and I were using the Clipper to see what we were doing. Boy2, who just turned 6 and is still learning how to read, was more intrigued by the machinery and the sounds. The idea of the bell was he thought to be very cool! We had to lift the machine up so he could see it - and then he wanted me to type so he could see the bell actually work. Then we looked inside where the ribbon is. Boy2 is learning to play piano and thought the keystroke action SO cool. 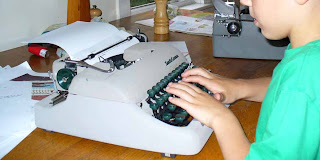 Then Boy2 got a little bored until I said we should type a letter to his parents and HIDE it for them to find. So we typed up an exceedingly silly letter, made an envelope and stamp, typed the address. Now, where to hide it? They decided that under their Mom's pillow was the best place, so we all trooped upstairs and did that, after much discussion about if Mom and Dad would find it or just 'crunch it' when they came to bed.
Back downstairs to the typers . . . Boy1 returned to writing his story, laughing at how he could "make the dragon's words of magic" by typing the same letter over and over. Meanwhile, Boy2 and I started playing a game where we would take turns typing out strings of letters and then the other person had to "read it." Reading involved making the sounds of the letters (preferably loudly and dramatically!) - so the stranger the combinations of letters and the longer the list of letters, the funnier the sounds. (Exclamation points had to be made with a shoulder-shrug-hands-lifted-up and a surprised face.) We did this for about 45 minutes laughing like crazy the whole time. 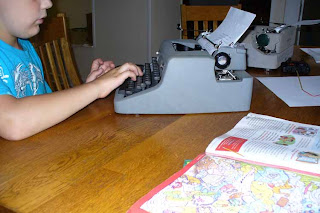 When it was time for bed, each boy put a typewriter back in its case.  Then it was wash up time and upstairs for a reading performance of Boy1's story (he'd typed a page and a half's worth of a dragon and 'hero dude' adventure!). I followed up with a reading of Lion by William Pene Du Bois, a neat children's book from the 1950s about an angel artist who 'invents' the first lion.

So all in all, it was a HUGE success! Thanks again, Dan @TypeClack, for making some wee boys (and their Auntie!) very happy!