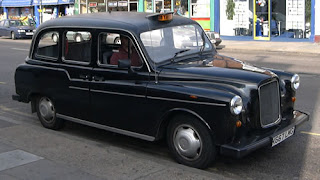 I'm a big fan of the Science Channel's program How It's Made. When the network recently staged an all-weekend marathon of episodes, I was ecstatic. Of course the quality of individual shows varies. It's very cool to see puffy orange Cheetos or wooden hurling sticks or wax coloring crayons made from their very beginning components. (It's another thing altogether when the episode guide touts something elaborate like all-terrain vehicles or London taxi cabs and the opening narration says something like "first the worker bolts down the chassis." Hey! No fair!! How did that chassis get made?) 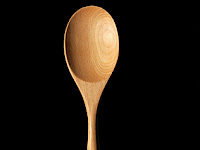 I like making and I like to own things that were made with a sense of craftsmanship and pride. I like the history that imbues them -- the hands that made them, the hands that used them. I am especially keen on things that were designed to make other things. Such as wooden spoons - I have two large ceramic jars of wooden cooking and baking utensils (the one jar is actually the pottery pitcher my grandmother used for serving up lemonade back on the farm).

My favorite breadmaking bowl comes from the folks at Clay City Pottery. And while the blue bowl I use for almost all the rest of my baking comes from Dansk, I am rather fond of it because it came from the factory remainders and isn't quite round. Someone mis-set it when it was made or fired.

I especially like typewriters and sewing machines -- and own three of each. The story of the typewriters I wrote of earlier here. The sewing machines in my life have been many; they come and go. I learned to sew on my grandmother's Singer treadle machine. Its legs and wide foot pedal were made of cast iron and it hummed loudly when I sewed. Working it as a young girl, I felt strong and powerful. Later, I used my mother's electric cabinet-Singer. Since then, I've owned or borrowed a small stable of household and industrial machines.

Recently my cousin gave me her mother's early 20th-century Wheeler and Wilson treadle machine. It's in glorious condition though decidedly unglamorous, lacking the brighter-colored decorative decals these machines often wear. The machinery runs smoothly and the oak and oak veneer cabinet are still in reasonable shape.

More recently, I came by a 1910 Singer treadle, a slightly fancier version of the machine I first learned on. It looks good but it hasn't been used in awhile, so the mechanisms feel gummy and uncertain. And the cabinet, of a somewhat spartan design and finished mahogany wood I think, was broken and worn in many places.

I knew I could not keep them both and yet the Singer machine was well-built and could be restored. In the end, I decided to keep the machine head to switch out with the other as needed and decommission its cabinet. That's how I spent the afternoon today.

I removed the machine head and turned the cabinet upside down onto its top. Screw by screw, nail by nail, and piece by piece I disassembled her. It felt strange and precious to be doing it. At one time each of these many screws had been placed by someone's hand. The funny-looking, pinhead-topped nails had been gently tapped into place to hold the narrow wooden strips along side the drawers. The top edges of the wooden drawers were smooth from wear and the open-hinged top piece was worn at the place where the seamstress' wrist rested as she ran her fabric under the needle.

The machine was nearly 100 years old. The person who I got it from spoke of both his mother-in-law and her mother using it. As I slowly removed the different pieces the notion came to my mind that it was like washing the dead. It's a service to do so; one honors the time and duties that person gave while living. So I felt with the treadle machine. She had served; she had made; she was used by many in making for many. A century she lived, will live on as I continue to use her in makings of my own.

I did save the iron base to use to make a table and some of the metal piecings for repurposing: four copper hinges; the heavy iron spring mechanism that held the machine head in place, two narrow; heavy metal bits that held a missing front drawer; and four flat pieces of shaped metal that braced the wooden drawers against the cast iron base. The bits and the flats are oddly shaped. They will, I thought, work well as pendants for jewelry. As soon as I thought that, the personality of this cabinet made one final sigh. Words from a book I'd read came to mind:
"Fair she was who long ago
wore this on her shoulder.
Goldberry shall wear it now
and we will not forget her."
The Fellowship of the Ring. J.R.R. Tolkien. (1954)
Posted by J.A. at 3:37 AM