Packages for an Imagined Event: Item 5

One of the Owl Post packages from this Summer's Wizarding Event had a more immediate personal element to it: a photo of the person who was sending it to our student. Or so went the story.
I bought the frame years ago as part of a fictional letter game I had going with a friend.  The image in the frame came with it and I never removed it.  All this time it's been sitting in a box of art supplies.  When I was invited to be part of the event crew and was going through my stash, I thought it would be a good starting point for a package that one of our girl-child students would receive. 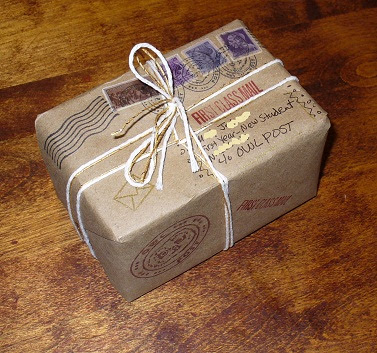 The package was smallish, measuring about 5.5 x 4 x 3 inches. It was a "local delivery" ~ that is, from a current student who was a year or two on in her magical studies. So the stamps were cancelled using the special logo stamp I'd designed for the event's own Post Office. (The larger image on the side of the packet was the same design made into a 2.5 inch stamp.) But that doesn't explain why all the postage stamps are from Italy! (Wonder if she noticed!)  It was double-tied with cotton string and a metallic gold thread. 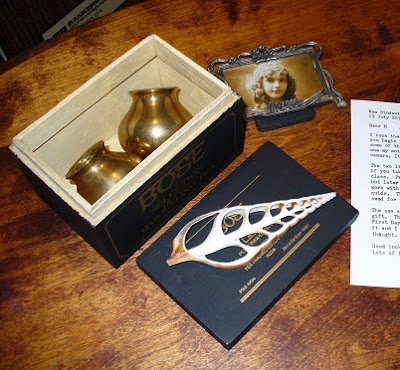 This package required little making; it was mostly a matter of combining the right items with each other and finding a box that matched the spirit of things.

The contents for this item were two small brass pots (Goodwill finds), a sliced cross-section of a sea shell (from my stash of artsy artifacts), and the aforementioned photograph.  The wooden box they were packed in was from some fancy tea I'd gotten about 10 years ago.  The lettering on the outside was a metallic gold which stood out nicely against the matte black background paint. 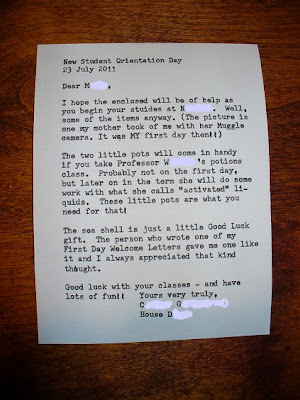 I typed the letter on a inside of a sheet of pretty pale blue scrapbook paper using one of the portable typewriters I own.  (Since I don't have "pretty pale blue" white out, I had to be especially careful not to make any typos - a bit of a challenge as I was composing the letter as I typed: winging it, as it were.)
Text of the letter:

New Student Orientation Day
23 July 2011
Dear M----,
I hope the enclosed will be of help as you begin your studies at N-----.  Well, some of the items anyway. (The picture is one my mother took of me with her Muggle camera.  It was MY first day then!)
The two little pots will come in handy if you take Professor W------'s potions class.  Probably not on the first day, but later on in the term she will do some work with what she calls "activated" liquids.  These little pots are what you need for that!
The sea shell is just a little Good Luck gift.  The person who wrote one of my First Day Welcome Letters gave me one like it and I always appreciated that kind thought.
Good luck with your classes -- and have lots of fun!
Yours very truly,
C------ G.  G-----------
House D----

This letter was folded, showing the postal-themed images of the scrapbook paper's top side,  and placed inside the box on top of the gifts. 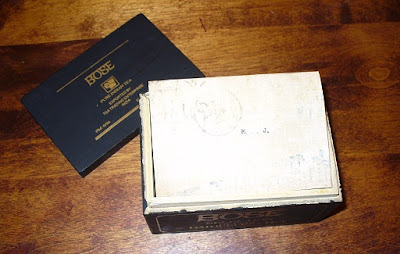 Because I was concerned that the box might pop open when the young lady opened it, I tied a strand of cotton kitchen twine around it to hold it closed. 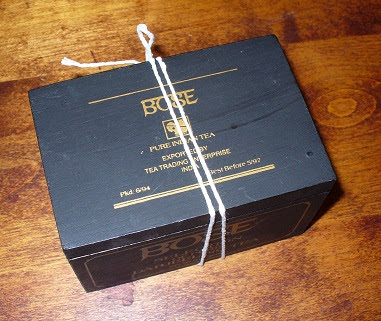 I didn't get to see this package being opened, so I don't know what its recipient thought.  But I rather like the idea that of all the students who got packages that day, she is the only one who got to see who sent hers. 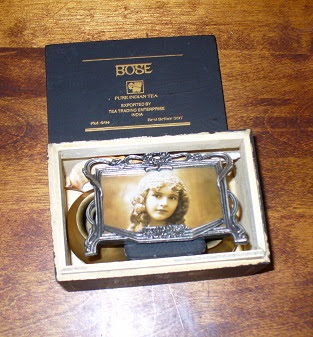