Packages for an Imagined Event: Item 3 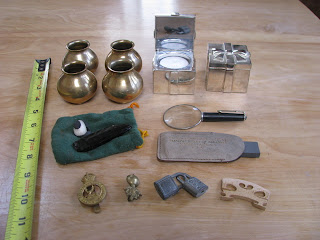 Some of the items I received from a project crew member.
Several months before the Summer Wizarding Event I put out a call for cool stuff.  Oddments, baubles, old science tools -- anything that could be imaginatively repurposed as a magical gift package for one of our "new students."
The following packet went to a boychild about age 10.  It was a combination of items received, items found or bought, and items created. 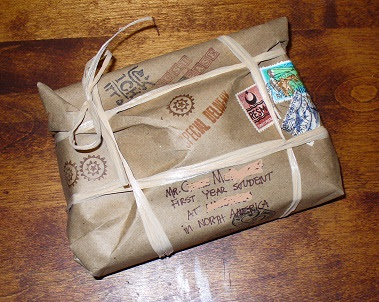 As it happens, I knew the boy in question.  He was the grandson of one of our actors.  So I guessed that he might enjoy a small collection of "adventure tools." 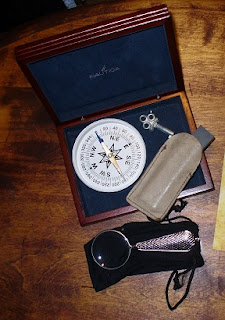 The compass was a cheap find from American Science and Surplus, one of the coolest stores ever!  A quote from their Manifesto page says it all: "American Science & Surplus continues to offer a unique mix of industrial, military and educational items, with an emphasis on science and education. We supply a wide range of unusual and hard to find items (some say bizarre stuff) to the hobbiest, tinkerer, artist, experimenter, home educator, do-it-yourselfer, and bargain hunter." Just reading the item descriptions in their catalog is entertaining.
Sample Product Description from the AS&S catalog: "Gadgeteers, get out your charge card. This is an instrument you absolutely have to own. It reaches down below sofa cushions, inside piggy banks, into fish tanks, and past a gallbladder. Not simultaneously, of course."
We're lucky to have a location here, so I make it a point of "visiting" ever few weeks.  I always find some neat stuff.  The magnifying glass in the above pic also came from AS&S; part of a set of 7 (priced at only $7.95), each different sized and each with its own little cloth drawstring bag. Several of the packages I made up had one of the magnifiers as part of the gift.
The grey rectangle in the stitched case is a fire flint; the kind of thing a backpacker or camper would keep in their stash of critical tools. 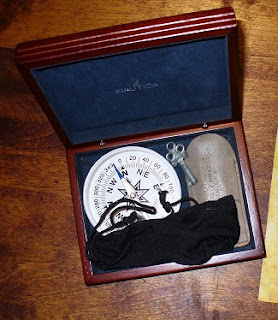 The key came from the large collection of keys we amassed for another aspect of the event (info about that is forthcoming in a couple of weeks!).  It looked like the kind of key an intrepid explorer might find useful should a mystery door or lock box be discovered. 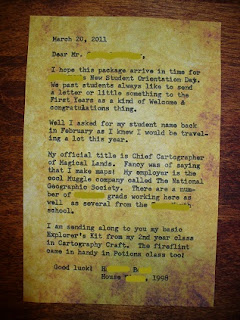 The letter that accompanied this package was from a long-ish ago alum of our School.  I made the old-looking stationery by printing a parchment graphic on both sides of sheet of off-white card stock paper which I then trimmed using a paper cutter.  I used an image I'd found via Google Images (under the search phrase old parchment paper). To make the paper look old (and it to distinguish it from the old letters some of the other kids received as part of their packages), I tweaked its color and contrast using the Picture Tools function of Microsoft Word.
I typed the letter itself using one of the 9 machines I have in my portable typewriter collection.  Here is the transcription.

I hope this package arrive[sic] in time for N---- 's New Student Orientation Day. We past students always like to send a letter or a little something to the First Years as a kind of Welcome and congratulations thing.

Well I asked for my student name back in February as I knew I would be traveling a lot this year.

My official title is Chief Cartographer of Magical Lands. Fancy way of saying that I make maps! My employer is the cool Muggle company called The National Geographic Society. There are a number of N---- grads working here as well as several from the ------ [Canadian] school.

I am sending along to you my basic Explorer's Kit from my 2nd year class in Cartography Craft. The fireflint came in handy in Potions class too! 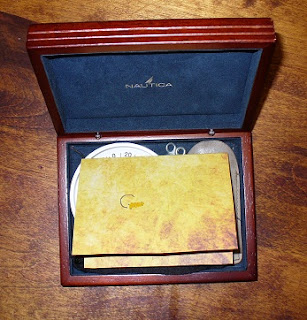 The letter was folded -- the name of the child written in mocha-brown ink using a dip pen --  and placed in the wooden box with the items. 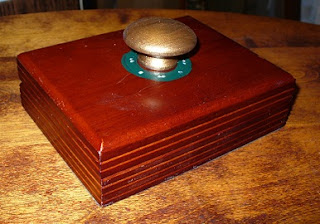 The box itself was a 99-cent Goodwill find.  It had a brand name reverse-embossed on the top which I wanted to disguise somehow.  The solution was a smallish, wooden door knob which I painted with a metallic dark gold, acrylic paint and super-glued to the cover.  Some of the brand name's lettering could be seen still, so I painted a metallic border around the base of the knob and decorated it with small "doots" of silver puffpaint.
Fortunately, there was a small magnet that kept the box from popping open, but to make sure it didn't fall open when the boy opened the heavy postal paper wrapping, I tied a strand of gold-metallic thread around the box to keep it shut.
The end result looked like something a wizardy type made for him/herself with the idea that a non-wizardy person would think it perfectly normal.  With a small door knob on a small box, normal it wasn't!  But that was part of the joke of this package.
* * * * * * * * * * *
The posts describing these imaginary postal packages can be found grouped here under the tag faux package.
Posted by Judith at 4:02 AM