The Art of a Paleontological Pie 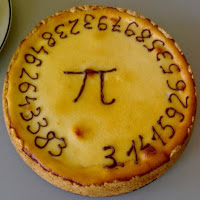 But pie can be made on any day and for any occasion. A few weeks ago my husband and I went to Chicago to visit our dear friends, Writer & Aurora. As is often the case with good friends, sharing a meal is central to being together. We eat, talk, nosh a bit more, and talk even more. It's the connection that matters.

We offered to bring dessert this time. As it happened, we had scads and scads of apples, so a pie was definitely the dessert to be had. I got up early to make it. The pie crust was a version of this one from Bon Appetit magazine. I always switch out half the white flour for whole wheat and add a bit of lemon juice or apple cider vinegar cider to the ice water. One other thing . . . I always use a mix of apple types--it deepens the flavor.

Usually I just do the two crust thing, making sure to sprinkle sugar-cinnamon on the top before putting it in the oven. Nothing fancy, just the loveliness that is pie. 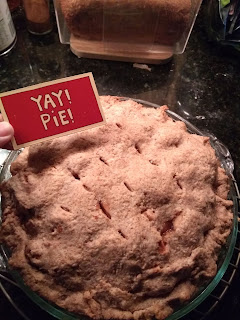 This time, well, this time I was simply silly.

Those that know me know I am an adult who never grew out of the Loving Dinosaurs phase that many children go through. My husband's first gift to me when we were courting was a small box filled with plastic, scientifically accurate dinosaur toys. (Reader, I married him!) I have all of the BBC's Walking With Dinosaurs dvds. I saw Jurassic Park several times. I happily stop whatever I am doing to watch the videos of people wearing those goofy inflatable T-Rex costumes.

But there's one thing that irks me, dinosaur-wise that is. It seems that the writers of every documentary or "science show" about dinosaurs simply must end with THE COMET. 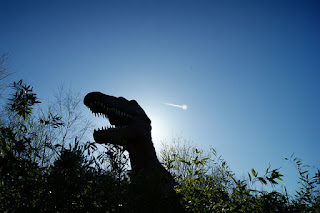 Scene: A sunny day. Dinosaurs of diverse herbivore types are happily munching away on grass or trees. Cut to a quick shot of a T-Rex (because you simply must have a T-Rex in any dinosaur show). Pan up to the sky . . . insert ominous music. 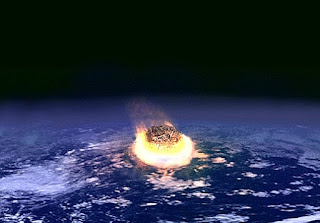 Then you have one of two special effects:
But . . . back to pie making.

Possessed by a sudden, Saturday morning impishness, I decided that this guest gift pie would commemorate those noble animals on their last day. I broke out the cookie cutters (because of course I have dinosaur-shaped cookie cutters and a comet-shaped cutter as well) and arranged the crust cutout shapes on top of the fruit. 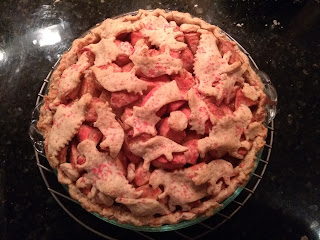 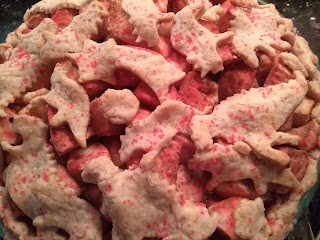 Once baked and cooled, the bakery was placed in the pie basket. 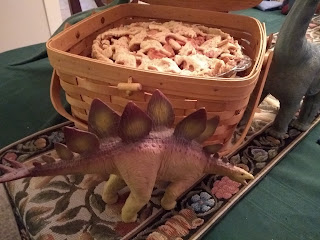 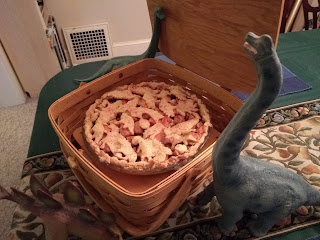 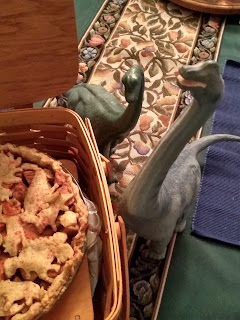 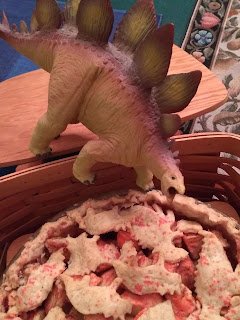 I can report the pie was well received and tasted great . . . the former not at all a surprise given the presence of this friendly creature in our friends' window. 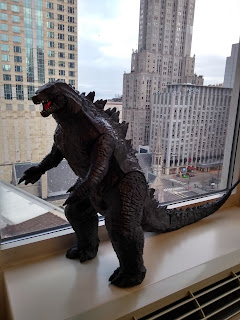 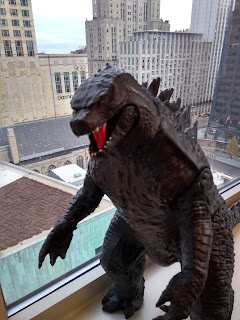 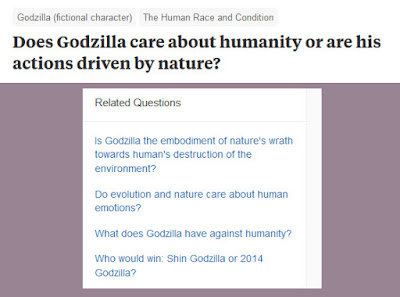