COOL BOOKS: From a Vending Machine 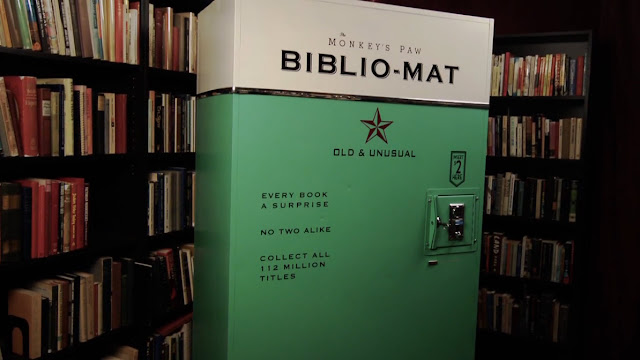 Image from the video posted below.


I really need to get back into listening to NPR's All Things Considered.  I miss the coolest stuff.  Like this: a one-of-a-kind, specially constructed vending machines for old books.

Thanks to the "Spooky Librarians" at Folderol this November 2012 story was brought to my attention.  Here are the opening words of the story.

Earlier this year, Stephen Fowler, owner of The Monkey's Paw used-book store in Toronto, had an idea.

He wanted a creative way to offload his more ill-favored books — "old and unusual" all, as the store's motto goes — that went further than a $1 bin by the register.

It came in a conversation with his wife: a vending machine.

It was done, and this delightful video was made about it. More than delightful.  It has Tom Waits singing and a magnificently MADE contraption that is a mix of steampunk flair, modified Rube Goldberg, and such perfect, perfect whimsy!