A Box of Clocks 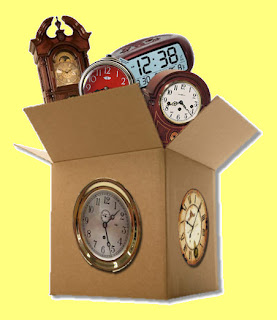 A very fine side co-occurrence of this past summer's Wizarding Event was that my brother, Architect, and I got to work creatively together. Our respective professions -- Architecture/Urban Planning and Information Organization/Education -- are intensely creative but in very different ways. At times this helped and at times it didn't.  But since we come from a Family of Makers, by and large it all turned out well.
Word on the street these days is that the wizarding crew is planning a new-and-improved event in 2013 -- so this year will be filled with all the fun and intensity of its planning.  And I am making 2012 the year I get my graphic novel project off the ground.  When that much creativity is at high flow, cool things happen.  Here's just one example (I will be posting about future ones as they occur!).
One thing the event crew is cogitating upon is how to further develop the various "sets." The event venue was an early-twentieth century residence turned fraternity house.  It had lots of character, but needed decoration/design throughout to make it look more like a school of magic. One important set is the Headmaster's office. 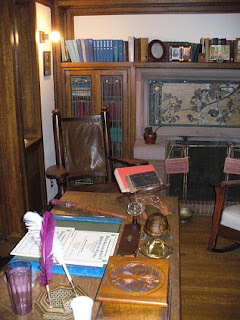 To that end, Architect asked me to be on the lookout for unusual looking "artifacts" that might work on this set.  Clocks were one thing we focused on. (There is an old Grandfather Clock outside the door of the office.)  Over the past couple of months of bimonthly visits to local Goodwill and Salvation Army shops (while also trolling for lost typewriters!) I found some funky clocks (or stuff to make clocks).  This past weekend, Architect and I rendezvoused at his house for a Grand Exchange.  Only he didn't know it was an exchange . . . more on that it a moment. 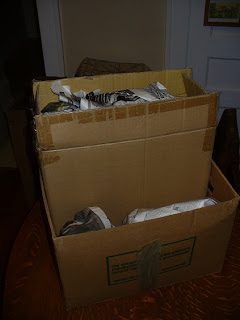 I arrived with this box of newspaper-wrapped items. 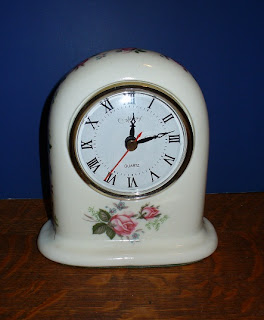 Item 1: A pretty, small porcelain Lady's Clock.  What made this one ideal was that, unlike a number of similar I'd seen, this one was completely contained: no open back that showed the modern, battery and mechanism. 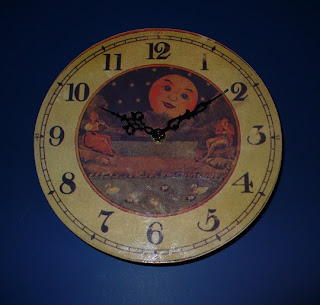 Item 2: This paperboard wall clock looked a bit old, which was its draw.  It was missing it's pendulum, though.  Brother Architect is thinking of making one that has a small planet at the end of the bar rather than the more typical brass disk. 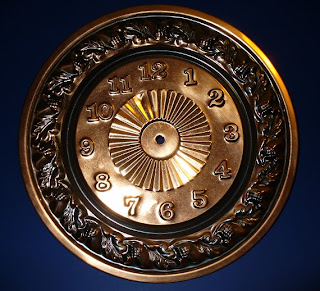 Item 3: An imprinted, copper wall clock with a design of acorns and oak leaves around its perimeter.  The house Architect and I grew up in was an 1840s, cream brick farmhouse.  In front was a massive burr oak, almost as old as the house.  So this clock was a neat one for both of us.  Also cool, is that it is just the face - which will allow for some creative re-fashioning.  It may stay as is or it may become part of a larger, fanciful steampunkish thing. 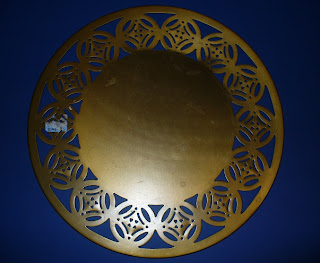 Item 4:  This is actually a metal charger, a large flat presentation platter or plate.  It was about 14 inches across.  I thought that Architect, being a man of many interests and maker abilities, would be able to do something with this.  The expression on his face when I unwrapped this told me I was right.  I shall be very interested in seeing what he comes up with for it! 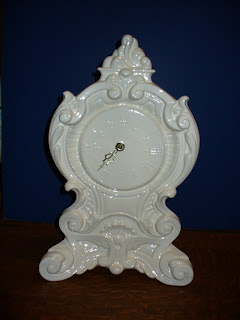 Item 5: This was the most exciting find: a 15-inch tall porcelain, working clock!  That it weathered the often rough-n-tumble shelving that is Goodwill without so much as a chip was also a happy thing.  I tested it along with all the others that had mechanisms.  This one was missing its minute hand, but when plugged in and the hour hand set to match those of the others, it kept true time.
I thought these clocks a fine trade for what I received that day - something I'd long wanted and, this year, especially so: a drawing table. A few months ago, knowing he travels in circles where such things might be found, I asked Architect to keep his eyes open for an old drafting table base.  I have the top, I said.  As it turned out, he didn't need to look any further than his own storage/workroom! 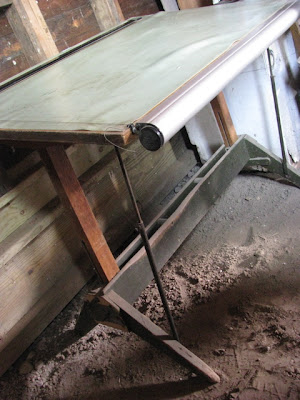 Not only was it just what I needed, it had a very precious history.  Some thirty-plus years ago it had belonged to my Uncle Traveller, a person of great humor and many tales who has had a great influence in my life.  He saved it from a construction site and later gave it to my brother when he was doing his architecture schooling and, later, design work. Now it comes down to me at a time when I am about to set off on some design and storytelling adventures of my own. 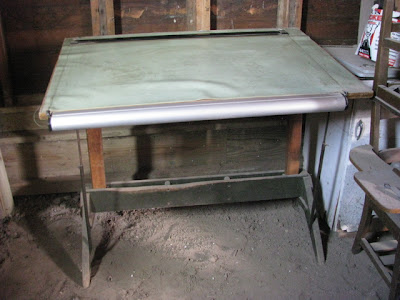 I brought it home with me and, once I finish creating the Painting Ladder Bookshelves I've been working on in the basement, I'll be installing it in my own workroom. Well worth a box of clocks I'd say.
Posted by J.A. at 4:08 AM