Urban Farming - Second Summer - How It Went Down 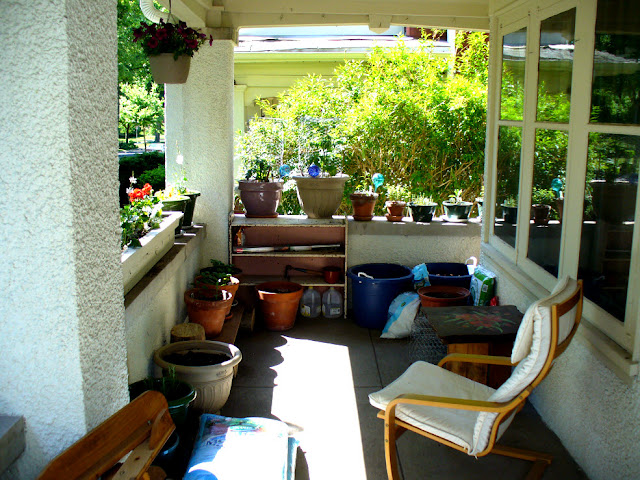 This is what my porch garden looked like back in June.  Oh I had great hopes for a bountiful harvest. 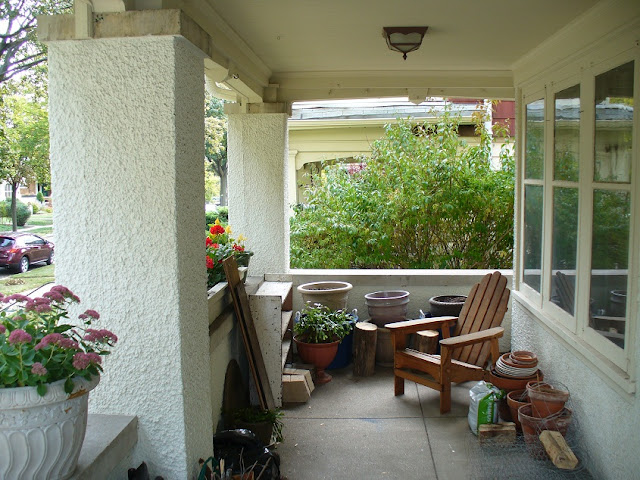 And here's what the porch looked like this past weekend after decommissioning.  The clay pots will be moved down into the basement while the plastic ones, still filled with dirt, will be stacked and covered with tarpaulin.

Some hopes were fulfilled, but - sadly - many were not. We've been having a drought in this area for over a year now.  Last winter was mild with very little snow.  This Spring was relatively dry and the summer saw successive heat waves without much by way of rain in between. 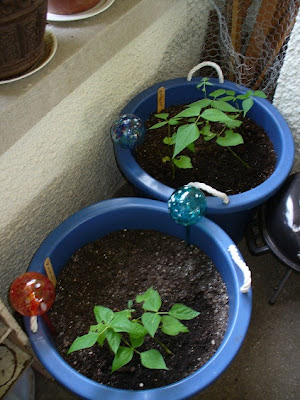 This was as large as the beans ever got - then they faded.  Two thirds of the seeds never sprouted. 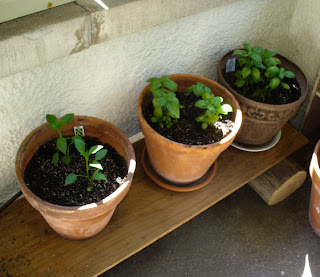 The two pots of basil grew half the height of last years' crop and looked pale and thin all summer. The pepper plants -- on the left in the above and below pics -- looked like something out of a Dr. Seuss story by summer's end, and birthed only 5 scrawny peppers (that tasted bitter).  The rosemary (right below), being heat loving plant, did pretty well though it didn't grow too high. 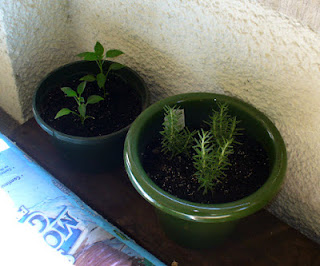 The only plants that did well were the tomatoes.  I forget what varieties they were -- both "dwarf" brands for porch containers.  They loved the sun and the heat, but were utter water pigs when it came to hydration.  We had tasty, though small, tomatoes from late July until last weekend. 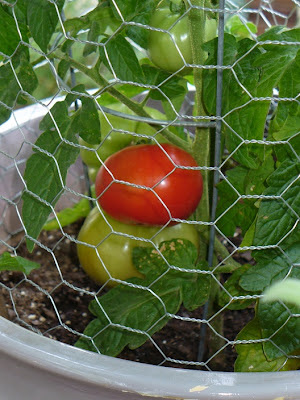 Ann Z., who stopped by to read my urban gardening posts, had some questions about the tomatoes.  I said I'd answer them in this post.  Here's what Ann asked:


"Does the chicken wire work well in both keeping the squirrels at bay and staking the tomato plant? I've been fighting squirrels all summer and am looking for a new way to protect my tomatoes next year. Also, I live in an apartment complex so I want to make the chicken wire look as neat and nice as possible and not be an eyesore for the neighbors. Yours look very cute, do the wires look as unobtrusive in real life, or does the camera make it look not so bad?"


"Great, also, if you don't mind letting us know how you manage to reach into the cage for pruning or to harvest tomatoes when they're ripe. Thanks!"


First, thanks Ann for your interest! I had midland success with my potting/staking/protection plan.  Here's what I did [Ack! Just noticed the misspellings! It's late as I wrote this post! ;-) ]. 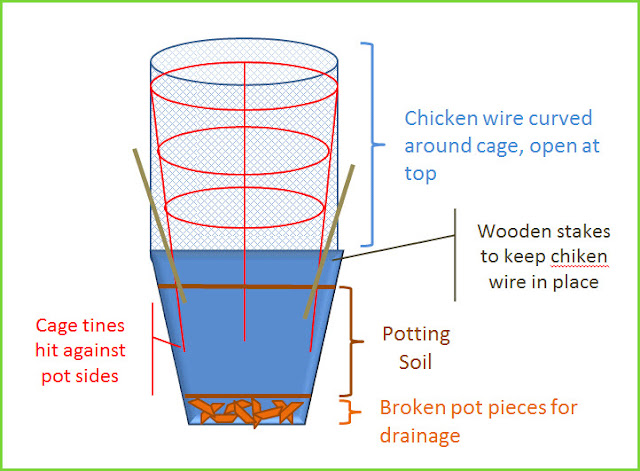 Here's what that looked like early in the summer. It looked tidy and not too messy. Initially, I'd made separate covers of chicken wire for the tops and held the wire cases down with wooden stakes. Inside I used traditional tomato cages.  The chicken wire alone was not strong enough to hold the plants up. 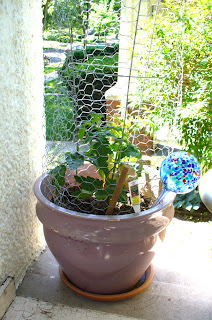 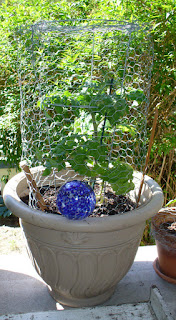 Later in the summer, though, the plants got big, and very top heavy.  I had to remove the tops of the wire cylinders to give the plants room to grow.  I saw no evidence of squirrels until the very last 2 weeks. Whereas I noticed frequent diggings in my flower pots along the front wall of the porch. 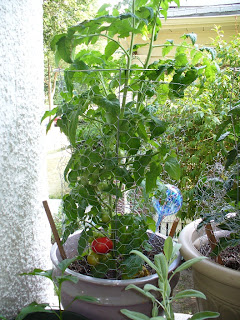 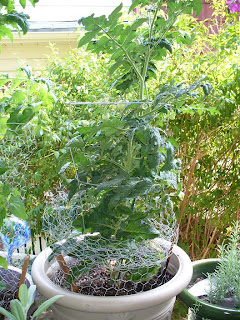 The tomatoes ripened one at a time.  To harvest the earlier, lower-down fruit meant I had to remove the wooden stakes and raise the chicken wire enough to reach under and clip the individual tomatoes.  By the end of the summer, I wound up having to "crush down" the wiring - both to get at the fruit and to give the plants more growing space.

And that's when I saw the first evidence that a squirrel had visited.  Interestingly, it didn't take any tomatoes.  But it did dig a small hole and half bury a chestnut podlet from a neighbor's tree!

So Ann, since the tomatoes grew so well I want to try them again next year, but this is what I will do differently: 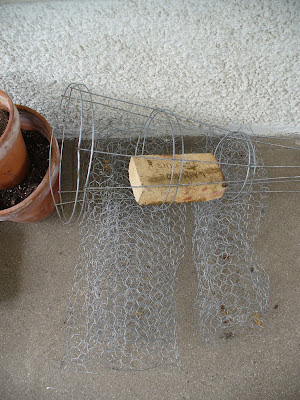 Cages and chicken wire -- the latter rolled up to use again next year. (The brick is to keep them from blowing off the porch.  We had some very windy days last week.)


And here's the last look - including the remaining flowering plants: the hardy geraniums, the plant-with-no-name (nice purple fuzzy blooms though!) and  happy, fat mums, compliments of our landlord upstairs! 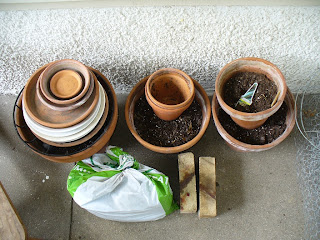 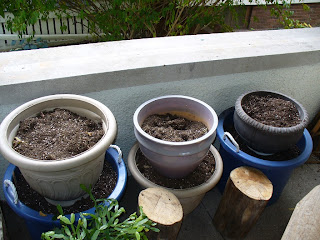 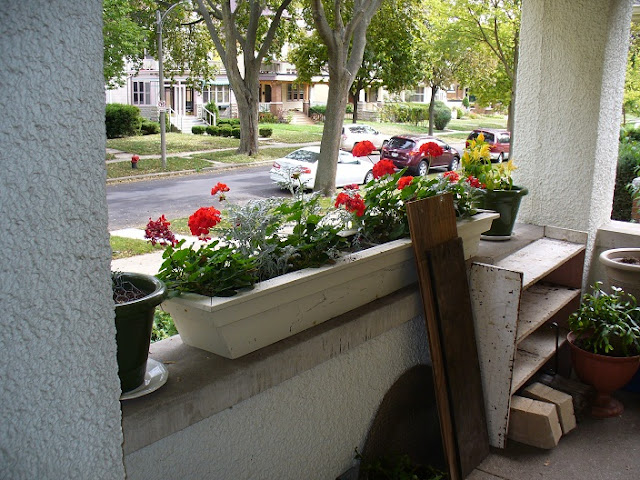 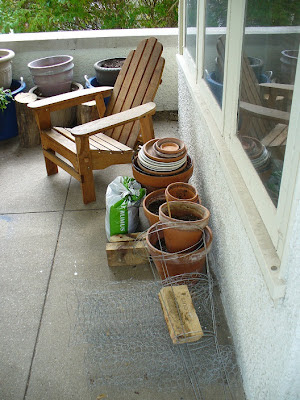 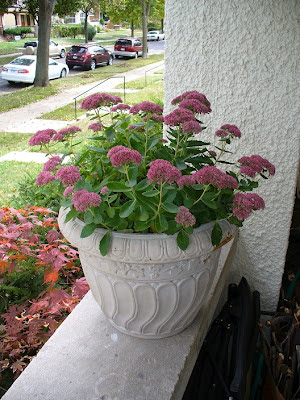 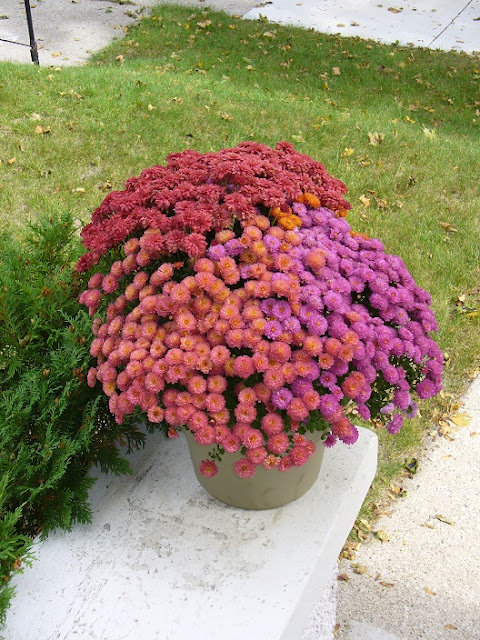