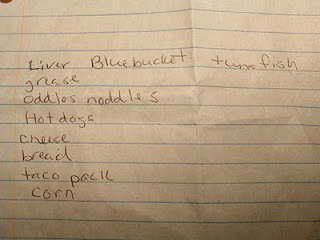 [Image source]
Every now and then I will come across a note someone lost or left behind.  It might be a slip of paper found in a library book, or a grocery list smushed into the basket of a grocery cart, or a piece of notebook paper that slid down the side of a booth's cushioning at a coffeeshop.
Over on Flickr, a group of people have been compiling a photo file of found notes.  The images cover a wide range of notes - many grocery lists, doodles, and the occasional poignant letter.  You can find the collection at this link. On a similar theme is the The Wreck & Crash Mail Society which was [from their website] "was formed in the latter part of 1994, and is devoted to the collecting and study of all aspects of delayed and/or damaged mail and interrupted mail services.  Currently the Society is composed of four study groups, namely: the Air Crash Study Group, The Railroad Wreck Study Group, the Ship Wreck Study Group, and the Suspended Mail/Conflicts Study Group."
Posted by Judith at 5:14 AM