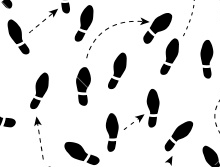 Image source
When my sister Artist was an undergrad doing her fine arts degree, she was given the assignment of showing movement.  Her solution was a clever one.  Using a long roll of paper, she drew out 'dancing footprints' - like those above - but varied their pattern and direction every 20 or so feet.  Then when the day came for the projects to be shown, she rolled out the paper and asked for some volunteers.  Their task was to dance down the roll using the footprints as their guide.

Image source
Then came the truly imaginative part of her creation.  She turned on a mixtape of music she'd assembled: a collection of varying dance musics - Renaissance, Jazz, Big Band, Rock, etc.  And just as she had hoped, the dancers changed their dance styles along with the music - all the while keeping their feet following the patterns on the paper.
The way dance varies according to its cultural and musical has long been a fascination of mine.  I am not much of a dancer, but I love the sensation of feeling how different musics make me want to move in different ways.  Here are a few fun examples of dancing and musical styles.
This one is the Curtain call from Richard II at Shakespeare's Globe theater (London) starring Mark Rylance.  It was a tradition to end a play - no matter how tragic - with a dance.  Here the modern cast made their curtain call into a dance.

Classical ballet is its own universe of drama, humor, poignancy, and elegance.  Here is one version of a famous scene: The Dying Swan.  In this 1986 video, 61 year old Maya Plisetskaya dances the her iconic role.  Note the utter fluidity of her arms at the beginning - like water flowing.

The all-male troup, The Trocadero Ballet of Montecarlo, has their own take on the dying swan - one that showcases the superb technical and comic training of its performers.  In this video, "Maya Thickenthighya" performs the piece - its own creation and a lovely homage to Ms. Plisetskaya. (This video includes the enthusiastic curtain call he received as well.)

Following through on my sister's notion of putting dance to different music, here is that same sequence  put to Dancing With Myself by Billy Idol. It still works!

This last piece just delights.  Dancer extraordinaire, Fred Astaire, thought this piece by the Nicholas Brothers one of the best dance performances in the movies.