Packages for an Imagined Event: Item 14 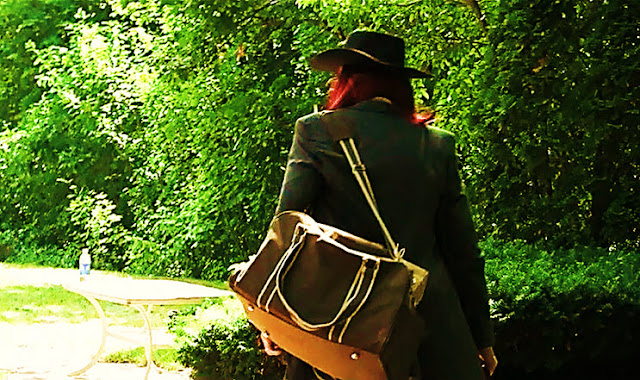 One fanciful idea from the 2011 Wizarding Event was the Owl Post.  Borrowing from J.K. Rowling's Harry Potter universe, we knew that 'getting mail' would be a very big deal indeed for our First Year Wizarding Students.  Having no trained owls to hand, we named our post office after the species in general and hand-delivered their letters and packages the old fashioned way, by Pony Express! 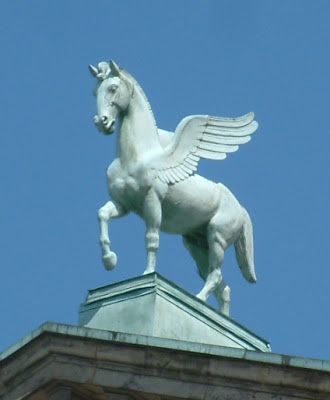 In my persona as a (wizardly) Pony Express Rider for the Owl Post, Western Regions Division, I told the students that Athena, my winged horse, was "out back" being treated to a "nice bag of oats" while I came inside to give them their mail. 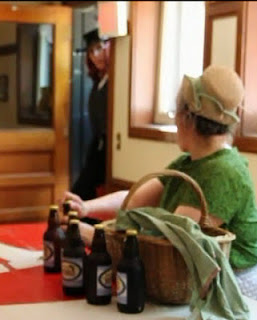 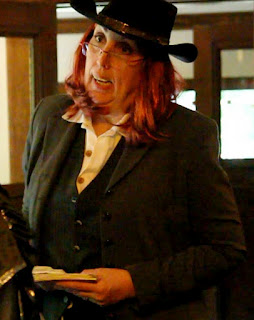 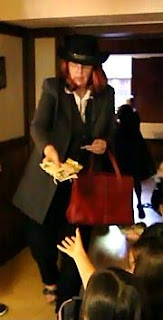 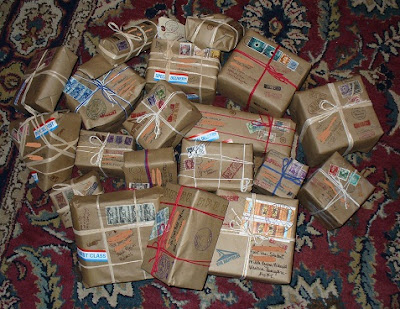 In creating each student's package, I created some specific criteria.

Another conceit was that the mail came from all over the world.  A long-time School tradition, former students (visiting as well as the School's own) would write letters of welcome to the First Years.  Our goal here was sneakily pedagogical: we wanted to create a kind of subliminal ambiance with two notions: that education (even wizardly education) is a global thing and that each student was a valued person within that kind community.


Package 14 hailed from Down Under.  It's recipient, a young lady, was one of the oldest of our First Year's. In so-called real life, she was from a home-schooled family who had traveled a lot. So it seemed fitting that her Perfect Package had traveled a ways to get to her that day. 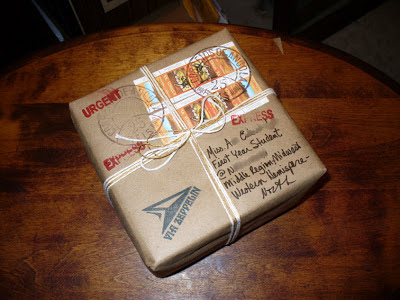 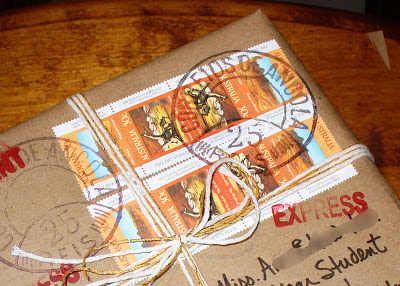 The outer box was a lucky Goodwill find: sizable, colorful, and sturdy (and only 99 cents!).  It added a festive quality to the gift. 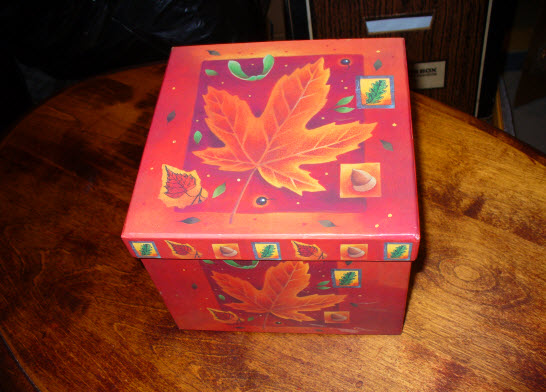 One of the two enclosed items was a Goodwill find as well.  Of the classes students could take on Orientation Day, one was the classic Potter-esque Potions Class.  Our professor in that area is, in this universe, a practicing herbalist with a specialty in mycology (the study of mushrooms). 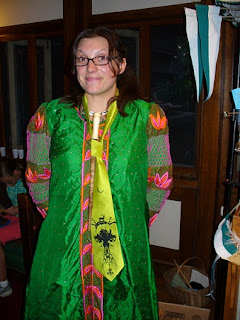 More on the Dear Professor W. can be read at this post.

One of the more amusing aspects of creating these Perfect Packages was seeding ideas that might, or might not, make their way into the narrative of the day's event.  For although there was a story for the day, which the actors and crew about in a kind of general way, and a schedule of activities, which were designed, in part, to serve the story, what actually got said and done was entirely improvisational.

In the case of this package, a now-out-of-style potions mini-cauldron was the primary object.  It looked nothing like the cauldrons described in Rowling's books (or later depicted in the films). It was flat, small, and seemingly well-used. I hoped if that fact would prompt this particular student to ask Professor W about it!

Actor Hoja is very quick on her toes with improvisation, which I knew when creating the post items. Working several months in advance of the event, I entertained myself with wondering how she'd respond to the various curve balls I was throwing her (and her actor colleagues) via the packages and letters. 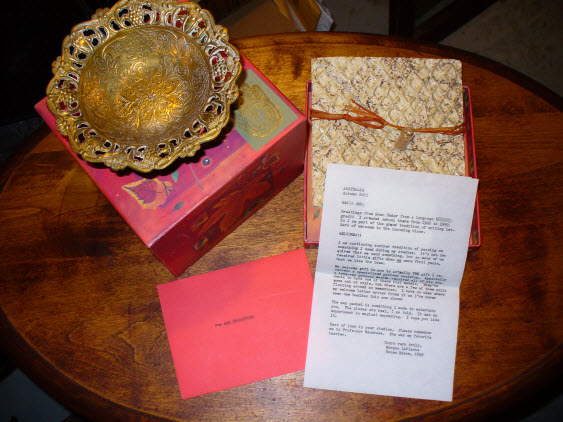 Besides the cauldron, the package also contained an elaborate map which, unfortunately, I seem to have forgotten to photograph! My apologies - especially since it was a rather lovely and creative bit of paper folding, embossed stamping, and words.  I'd received it as a piece of mail art some 20 years ago. It was tied closed with a strip of raffia; the closure was a wee bottle filled with seeds and tiny leaves. 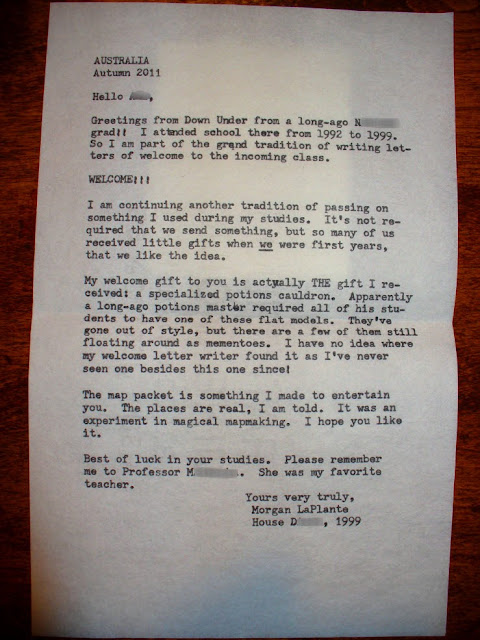 I broke out one of my portable typewriters to write the accompanying letter.  (For those of you scoring at home, I believe it was a Smith Corona Galaxie II.)  The paper was a heavy-ish-weight parchment.

Greetings from Down Under from a long-ago N------ grad!  I attended school there from 1992 to 1999.  So I am part of the grand tradition of writing letters of welcome to the incoming class.

I am continuing another tradition of passing on something I used in my studies. It's not required that we send something, but so many of us received little gifts when we were first years, that we like the idea.

My welcome gift to you is actually THE gift I received: a specialized cauldron. Apparently a long-ago potions master required all of his students to have one of these flat models.  They've gone out of style, but there are a few of them still floating around as mementoes [sic].  I have no idea where my welcome letter writer found it as I've never seen one besides this once since!

The map packet is something I made to entertain you.  The places are real, I am told. It was an experiment in magical mapmaking.  I hope you like it.

Best of luck in your studies. Please remember me to professor M-------.  She was my favorite teacher. 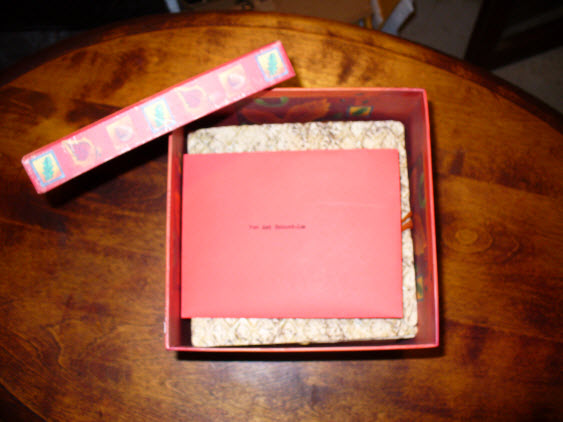 The letter was placed in an envelope that matched the bright pink of the box.
And all was wrapped in the heavy brown wrapping paper for mailing. 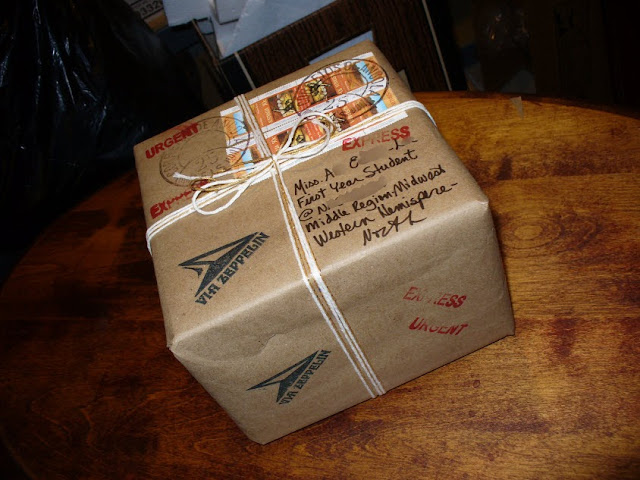 And although the final land-miles of its journey were via (Flying) Pony Express, I made sure that the item would make it safely over the oceans between Australia and the Midwest by employing one of the many faux postage rubber stamps I have. (In this case, it is one I designed myself for the original Dante's Wardrobe, a mail order purveyor of rubber art stamps!) 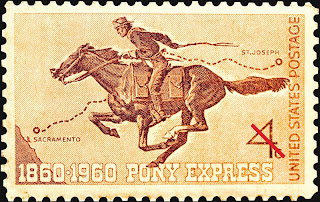 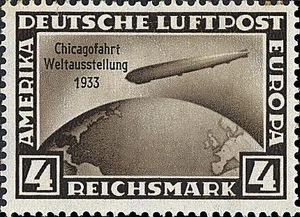 The posts describing all the imaginary postal packages can be found grouped here under the tag faux package.