A Box with Air Holes 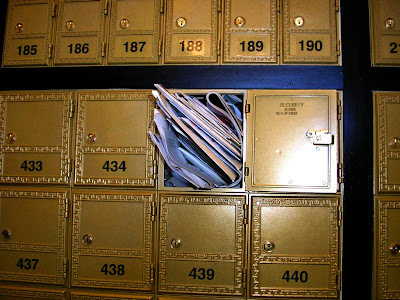 I like having a P.O. Box.  It makes me think of travel and pen friends and the occasional mystery.
Every now and then something truly remarkable shows up. 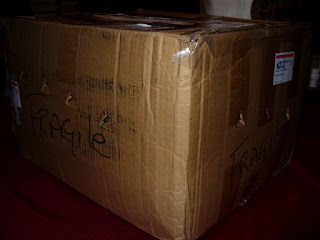 This large box was delivered this past week.
It was pretty beat up - not a good sign given that it was marked Fragile on each side.

A closer look revealed something not often seen: air holes! 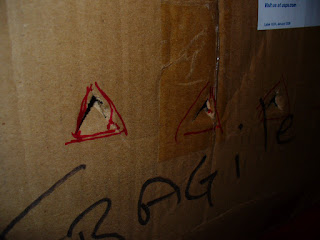 And the return address was decidedly fantastical. 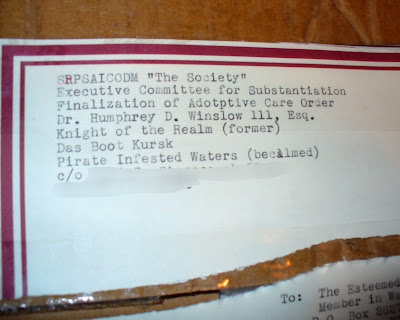 Clearly other, fictional universes were involved.  Entering immediately into the play of the thing, I imagined I heard wee snorkley sounds coming from inside! And did I see movement when I opened the box? 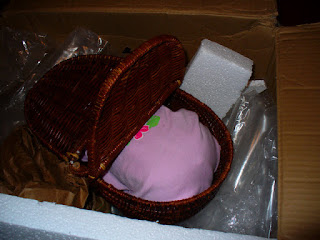 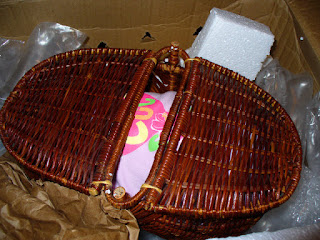 I carefully placed the basket on the table and opened it very gently. 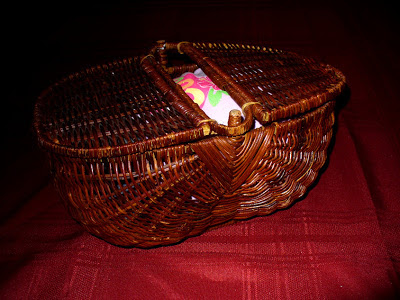 And what to my wondering eyes did appear? 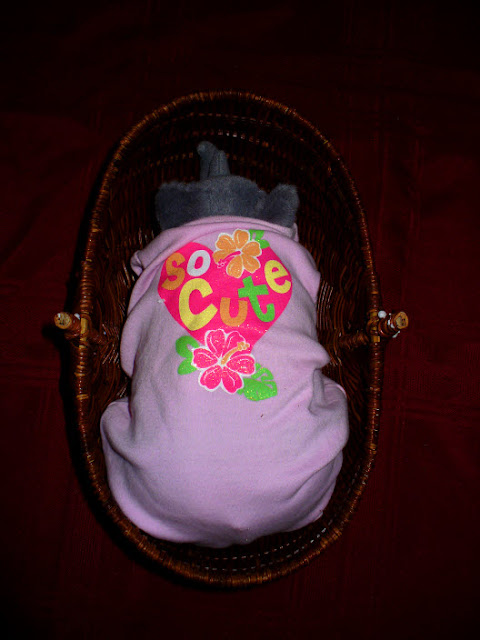 A wee NANO RHINO wearing its own wee onsie! 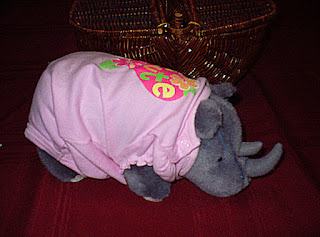 Accompanying this whimsical arrival was an impressive letter.  The stationery boasted gold embossing and an elaborate typewritten script.  Pinned to the letter was a dramatically posed portrait. 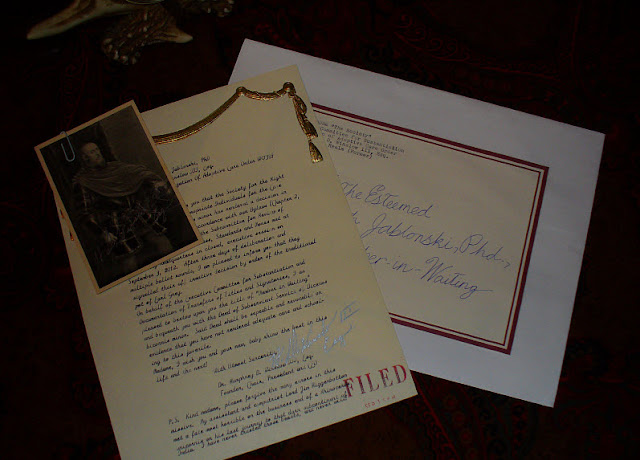 [Transcript below or click on the letter to read the enlarged version.] 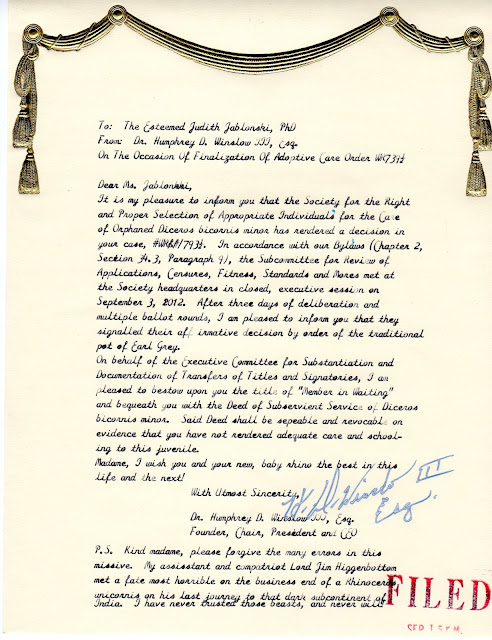 To: The Esteemed Judith Jablonski, PhD
From: Dr. Humphrey D. Winslow III, Esq.
On The Occasion Of Finalization of Adoptive Care Order WR739 1/2

It is my pleasure to inform you that the Society for the Right and Proper Selection of Appropriate Individuals for the Care of Orphaned Diceros bicornis minor has rendered a decision in your case, #WR&#/7931/2.  In accordance with our Bylaws (Chapter 2, Section 34.3, Paragraph 9), the Subcommittee for Review of Applications, Censures, Fitness, Standards and Mores met at the Society headquarters in closed, executive session on September 3, 2012.  After three days of deliberation and multiple ballot rounds, I am pleased to inform you that they signalled [sic] their affirmative decision by order of the traditional pot of Earl Grey.

On behalf of the Executive Committee for Substantiation and Documentation of Transfers of Titles and Signatories, I am pleased to bestow upon you the title of "Member in Waiting" and bequeath you with the Deed of Subservient Services of Diceros bicornis minor.  Said Deed shall be sepeable [?] and revocable on evidence that you have not rendered adequate care and schooling to this juvenile.

Madame, I wish you and your new baby rhino the best in this life and the next!

P.S.  Kind madame, please forgive the many errors in this missive.  My assistant and compatriot Lord Jim Higgenbottom met a fate most horrible on the business end of a Rhinoceros unicornis on his last journey to that dark subcontinent of India.  I have never trusted those beasts, and never will. 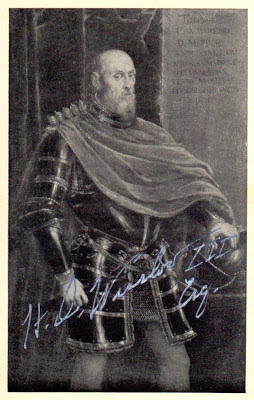 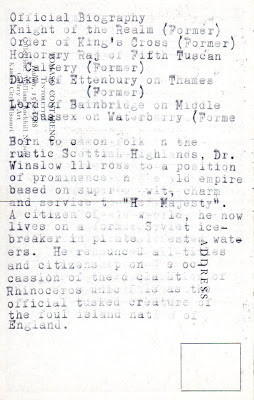 Uncertain as to how Dr. Winslow III shall ascertain the welfare of the wee bicornis minor, I have posted this image below to reassure him and the Society.  The as yet unnamed beastie has been put in the tender care of one Moberg, House Mascot and Socialization Chief.  Said Moberg has mentored numerous individuals of the class Crepundia Telae and immediately adopted the wee rhino and made it 'to home.' 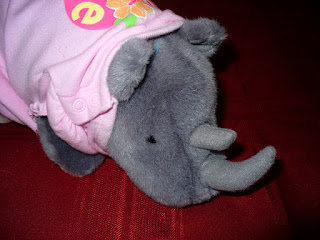 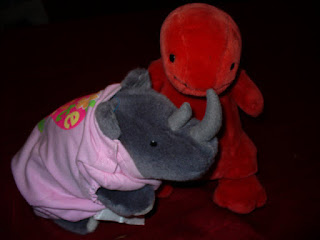 I also wish to send my thanks (and barely submerged chuckles) to the Society.  It is very good to know that the recent drought and excessively hot weather of the past summer has in no way dimmed the imaginative faculties of the denizens of the State of Kansas! 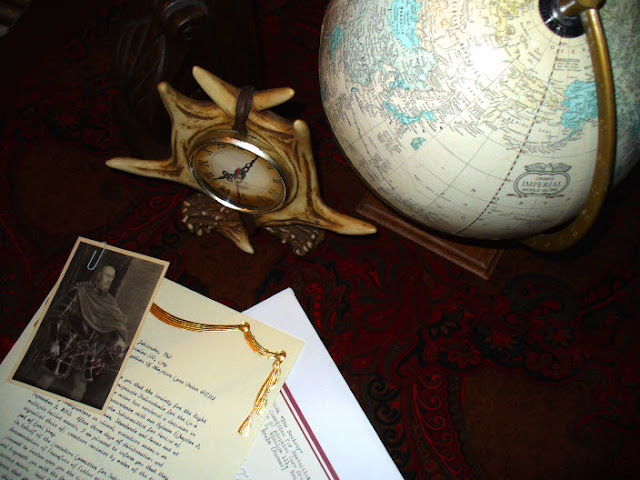