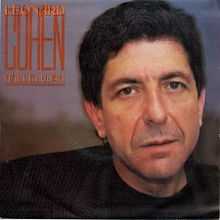 There are songs that get so overworked:  "My Heart Will Go On" from the film Titanic, "Memory" from the musical Cats, Antonio Bocelli's "The Prayer."  Leonard Cohen's Hallelujah has gotten its fair share of overplay yet still affects powerfully -- as a Rorschach test, an anthem, a talisman, and a point in time - whatever time it's sung.
The Wikipedia article on the song notes: "Cohen's lyrical poetry and his view that "many different hallelujahs exist" is reflected in wide-ranging covers with very different intents or tones of speech, allowing the song to be "melancholic, fragile, uplifting [or] joyous" depending on the performer: The Welsh singer-songwriter John Cale, the first person to record a cover version of the song in 1991, promoted a message of "soberness and sincerity" in contrast to Cohen's dispassionate tone; The cover by Jeff Buckley, an American singer-songwriter, is more sorrowful and was described by Buckley as "a hallelujah to the orgasm"; Crowe interpreted the song as a "very sexual" composition that discussed relationships; Wainwright offered a "purifying and almost liturgical" interpretation to the song; and Guy Garvey of the British band Elbow anthropomorphised the hallelujah as a "stately creature" and incorporated his religious interpretation of the song into his band's recordings ."

Your faith was strong but you needed proof
You saw her bathing on the roof
Her beauty and the moonlight overthrew you
She tied you to a kitchen chair
She broke your throne, and she cut your hair
And from your lips she drew the Hallelujah

Baby I have been here before
I know this room, I've walked this floor
I used to live alone before I knew you.
I've seen your flag on the marble arch
Love is not a victory march
It's a cold and it's a broken Hallelujah

There was a time you let me know
What's really going on below
But now you never show it to me, do you?
And remember when I moved in with you
The holy dove was moving too
And every breath we drew was Hallelujah

You say I took the name in vain
I don't even know the name
But if I did, well really, what's it to you?
There's a blaze of light in every word
It doesn't matter which you heard
The holy or the broken Hallelujah

I did my best, it wasn't much
I couldn't feel, so I tried to touch
I've told the truth, I didn't come to fool you
And even though it all went wrong
I'll stand before the Lord of Song
With nothing on my tongue but Hallelujah