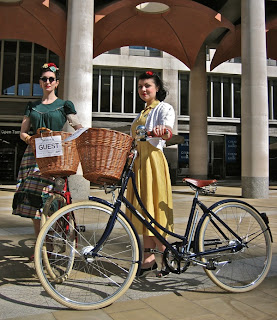 Bicyclists from the 2011 Tweed Run in London
Image source
I've previously noted the deeply delightful and often poignant local travel blog, Spitalfields Life. The Gentle Author has done it again, with an entertaining piece on a bicycling event known as the Tweed Run.  A few lines from the post will, I do hope, intrigue you (and the photos of the event are a great deal of fun as well).

"Just in its third year, no wonder the magnificent Tweed Run is already a global sensation. Beginning with one hundred and sixty cyclists arrayed in tweed for a turn around London in January 2009, it has now inspired copycat events in sixteen other cities across the world including New York, Paris, Sydney and Tokyo. Elegant in its simplicity, the notion of enthusiasts for traditional cycling attire banding together for a beano, enjoying a high old time, lifting the spirits of a city and raising money for bikes for Africa, the Tweed Run is one of the things we can be proud of giving to the world."

Two Dapper Gentlemen
Image source
Posted by Judith at 4:40 AM